In this edition of Class Struggle, joining others in the Archive, there are a number of particularly interesting pieces. The first includes an overview of the then newly formed Fine Gael/Labour/Democratic Left coalition which makes the prescient point that ‘inter-party coalitions are expected now to the normal rather than the exceptional form of bourgeois government’. It regards this as a ‘new flexibility of the ruling class in arriving at solutions to Governmental crises without recourse to general elections’.

DL is likely to be the main loser in the coalition. More is expected of it than of the LP as it, unlike the LP, has been up till now primarily a left reformist party. Already DL has lost one councillor who opposed coalition De Rossa has been pilloried because of the huge disappointment the budget represented to the long term unemployed and old age pensioners.

It notes too that..

The party also faces defections from its left wing to the far left.

It also analyses how the Unionist Bloc ‘fragments’ noting that ‘the Unionist ruling class does not speak with one voice on relations with Dublin or the benefits of economic cooperation within the EU’.

There are pieces on the X Case, and how Micahel Noonan had roles back what gains had been made since then, and why the IWG supports abortion on demand.

There’s also a long piece which takes the Workers Solidarity Movement to task for, as the IWG sees it, misrepresenting the October Revolution on foot of a privately circulated WSM response to an earlier piece in Class Struggle 22.

One last aspect of interest is a review of a volume of essays on Interpreting Irish History: The debate on Historical Revisionism which offers some useful insights into the issue at that point in time. 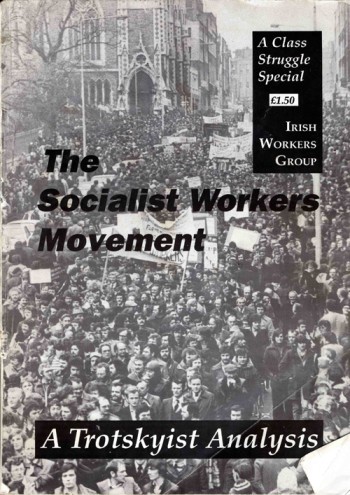