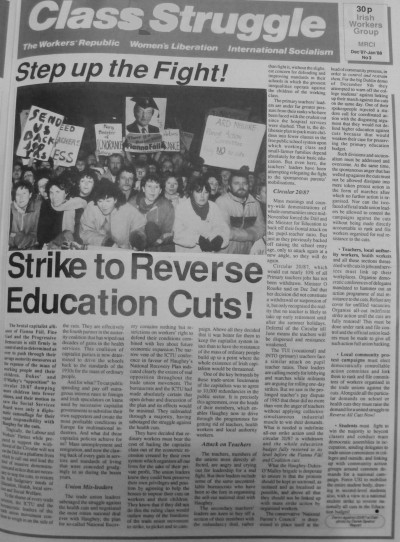 From the Irish Workers Group, another edition of Class Struggle. Noticeably more newspaper like than the edition posted last month this one has 8 pages, is large format and adopts a more tabloid like style.

The banner has ‘The Workers’ Republic’, ‘Women’s Liberation’ and ‘International Socialism’ as the slogans.

The contents covers areas from Education Cuts, featured on the first page, through a critical analysis of Sinn Féin and ‘New Challenge for Women’ in regard to engaging with the ban on abortion information. The centre spread, and the Editorial both critique ‘Guerrilla Warfare’ in the context of Marxism, and in particular the then-recent Enniskillen bombing. And the editorial argues:

The IWG unequivocally condemns the IRA Bombing at Enniskillen on November 8t. Our condemnation has nothing in common with the hypocritical representatives of the ruling classes in these islands and their apologies in the media and elsewhere.

The IWG does not condemn in principle the use of violence as a means of political struggle. Our standpoint, on the contrary, is the revolutionary international working class tradition of armed insurrection by the mass of the working class against capitalism and imperialism.

We condemn it as an act whose consequences cannot but lead, as it already has led, to the consolidation and strengthening of the British and Irish ruling classes.

International affairs sees the publication focus on Nicaragua and the Sandinistas, ‘The Real Limits of Glasnost’ and a report from Austria. 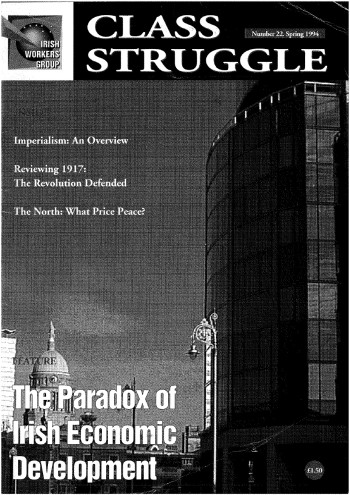