Irish Election Literature and the Irish Left Archive have started a joint project to put together leaflets and documents from individual demonstrations, marches, rallies and protests in Ireland.

We hope that making these documents accessible together will give a useful view of the campaigns in which the different strands of the Irish left participate, and provide a documentary record of the political issues that have led to political action and collaboration. One of the interesting facets of documents from a particular march or protest is that they can provide an insight in to the organisations that actively participate in particular campaigns; and in to how left organisations respond to political events and changes — often with a need to respond quickly to a developing situation, in contrast, for example, with regular periodicals.

All the initial material was collected and scanned by Alan Kinsella of Irish Election Literature, who had the idea of making material from particular protests available together as a way to document campaigns taking place in Ireland and the involvement of different strands of the Irish left, and kindly suggested a collaboration with the Irish Left Archive.

You can see the project and demonstrations we’ve covered so far in the Snapshots of Political Action section of the ILA website. So far we’ve included marches and rallies for abortion rights, the Cost of Living Coalition, and National Maternity Hospital, and there are more lined up to be added in the coming weeks.

We hope to continue expanding the collection and provide a broader documentary representation of protests and political events around the island. We’d be delighted to hear from anyone with material distributed at demonstrations, marches, rallies or protests who would like to contribute to the project. In particular, what we currently have is quite Dublin-centric and we hope we can expand to document the range of political action across Ireland.

So if you have relevant material, please get in touch; and if you’re participating in political action — either producing documents or folding them in to your pocket as you continue marching — we’d be grateful if you would collect them and pass them on.

You can contact and either Irish Election Literature  or the Irish Left Archive if you would like to pass on documents.

We’ve added a bibliography of Irish left publications to the left archive website, which you can find here.

This includes a list of publications that aren’t in the archive, which it seemed useful to have a record of without making it harder to search the collection by cluttering it with publications of which there are no examples.

Some of them are available elsewhere online, particularly more contemporary ones that are usually available as PDFs; others aren’t, to my knowledge, scanned anywhere.

If anyone knows of others that should be listed, please let us know in the comments.

You’ll find the list here – you can sort the entries by clicking a heading.

Note: one or two non-Irish publications have slipped in to the list, because those not attached to an organisation aren’t marked with a location. We’ll hopefully get that corrected soon.

We’ve added a small addition to the Irish Left Archive website in the form of pulling out some interesting events relevant to the Left and the materials in the collection for specific dates. You’ll see these on the homepage when there are relevant ones to show, and they link through to a list of events from that date, along with documents published and subject headings – i.e. elections, referendums etc.

The date is probably often the least important detail, but it’s a way to draw out some interesting articles and bits and pieces that might be otherwise missed in the materials.

You won’t see it very often at the moment! There are 366 days, and not so many entries… but we’ll add to it over time, and if anyone has suggestions for events to add that have some relevant material on the website, let us know.

Today (18th July), for example, marks the date of a Garda baton-charge against hunger-strike demonstrators outside the British Embassy in 1981, in which several were injured; and of the start of the Dunnes Stores anti-apartheid strike in the Henry Street shop in 1984.

The online archive of Socialist Worker has been expanded again to bring it almost to the contemporary. It now ranges from the first issue of The Worker in 1972 up to Socialist Worker issue 400 in 2017.

It includes 375 issues of the paper, with fairly complete coverage from the early 1990s onwards. It’s a great resource (and well done to the patient person who did all that scanning…!)

You can find them on SWOnline on Issuu.

This is an excellent archive of Socialist Worker from the SWP.

A significant number of scanned newspapers from the 1993 to 1999 period have been uploaded, almost all the Socialist Workers published at that time. There’s also a smaller number of pre-1993 papers now online too.

What is notable is how direct and visually well constructed the publication has been across the years.

We’ve added a new collection on the Irish Left Archive site to bring together the documents from the British Left on Ireland. Over the years the archive has added documents from a wide range of British Left organisations and this collection groups them within broad Left trends: British Labour Party (and related groups), Trotskyist groups, Communist Party of Great Britain (and related groups), other communist organisations, Maoists and Socialist Party of Great Britain.

You can view the collection on the Irish Left Archive website: The British Left on Ireland. 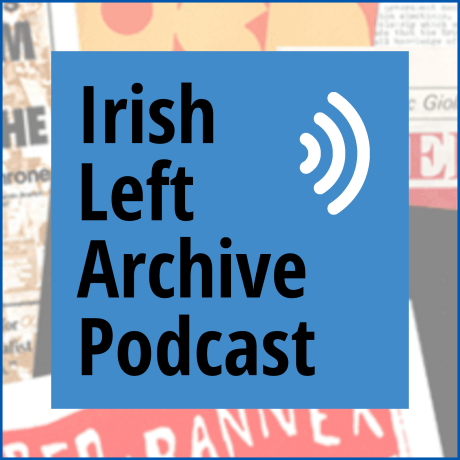 We’ve started a podcast as part of the Irish Left Archive project.

We’ll be talking to activists, writers, historians, politicians and others involved in the Left about the experience of being involved in building and participating in left groups and campaigns, producing political periodicals and documents, and the history and development of progressive politics in Ireland.

The first two episodes are live now. You can listen to them on the leftarchive.ie website, or find them on Spotify. (It should be on Apple/Itunes soon too – if it doesn’t come up in your podcast app yet, you can always add the podcast feed link directly).

In episode one we discuss the left archive project and how it has developed since it started in 2007.

In episode two, we talk to Laurence Cox about left activism and the publications in the archive that he has been involved in – An Caorthann, Ireland from Below, and Interface.

There will be more in the coming weeks with a range of guests, so please give them a listen, subscribe if you use a podcast app, and feel free to give us feedback!

We’ve recently added subject headings into the Irish Left Archive website to try and make it easier to find documents on a particular topic. They’re still a bit limited, but we plan to build them up over time.

You can view a list of subjects in the index, grouped by different types – elections, referendums, events or areas of policy.

On individual items in the archive, subjects are listed near the top, along with the organisation, year of publication, and so on. You’ll also see a ‘Suggest a Subject’ button, which you can use to suggest a subject heading – existing or new – that should be included on a particular document.

Hopefully this will make the archive materials easier to find. As ever, feedback, corrections and suggestions are always welcome.

This page shows the most recent news items, which we post on our sister site, the Cedar Lounge Revolution.
View older news items on the CLR