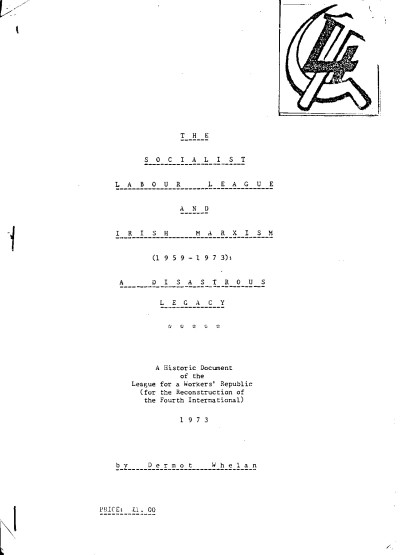 Here, for your reading pleasure, is a document issued in 1973 by the League for a Workers’ Republic entitled: The Socialist Labour League and Irish Marxism (1959 - 1973): A Disastrous Legacy.

Believe it or not there is a sort of BICO connection which I’ll get to in a moment… Still, in order to understand the history that led to this document and what it contained it is necessary to give a brief overview of one branch of Trotskyist thinking in Ireland.

wiki  gives a good history, but for those of you disinterested in following the link here is a potted outline. The LWR was a split from the UK based Irish Workers Group which had split from the Irish Communist Group. That was a straight Maoist/Trotskyist split between the redoubtable B. Clifford and others such as Sean Matgamna (who I have a most interestingly linked piece of material for the archive which I’ll put up in a couple of weeks). The LWR started up apparently due to unease at the way in which London was the base of the IWG. Matgamna was onside, but eventually left for the UK and fame and fortune (of sorts).

Various luminaries sallied back and forth and were part of or close to the LWR including a young Paddy Healy later of the TUI (and recent candidate for the Senate… Rumour has it that Seamus Healy, apparently his brother, was also involved. Anyone care to substantiate that?). Carol Coulter was also a name that cropped up.

Still, the Socialist Labour League? How did that enter the equation? Well, the SLL was, as a perusal of the document posted here will tell you, the precursor of Gerry Healy’s infamous Workers Revolutionary Party (by the by, in retrospect reading about the ferocious level of ‘activism’ demanded of your average WRP member it was of the sort to make even the most seasoned WP activist blanch!) that had some members in Belfast and sought to extend its franchise into the Republic. In doing so it encountered the LWR, attempted to combine with it, and the upshot is recorded in a somewhat less than fraternal analysis presented here.

So one will see allegations of ‘secret factions’ (p.6)… An individual on the SLL side who ‘led a life of petty-bourgeois bohemianism as student at Trinity College Dublin’ (p.8)… Charges of the ‘two-nations theory of the LWR’ and references to ‘groups won from OSF in Derry and Dublin’ (p.13) and a clear split on an approach to the North at the very point where it was spiraling out of control - note the way in which the approach to McStiofains arrest becomes a litmus test of revolutionary spirit. Indeed for all the claims and counter claims of Pablo-ite heresy (interestingly in relation to contacts between the Officials and the SLL (p.9) ) or otherwise it is this latter which I suspect is the real issue here, in that the SLL was seen as a carpetbagger.

The LWR is fascinating for having tenuous links at various times both with Gerry Healy and also the International Marxist Group although these links tended to lead to splits in what was presumably quite a small membership. That this dynamic was repeated appears to have somewhat escaped those at the coal face.

Later in the 1970s the LWR entered that most remarkable of Irish left parties, the Socialist Labour Party of Matt Merrigan and Noel Browne, before ultimately faded away. Others apparently associated with it include Alex White, now a Labour Senator

And as for Dermot Whelan whose name is on this document? Why - according to wiki - he went and joined Sinn Féin. Of course!

Incidentally, I don’t want to sound snide about the LWR. However super-heated the language they at least had the good sense to note some relevant issues on the ground.

More from League for a Workers Republic 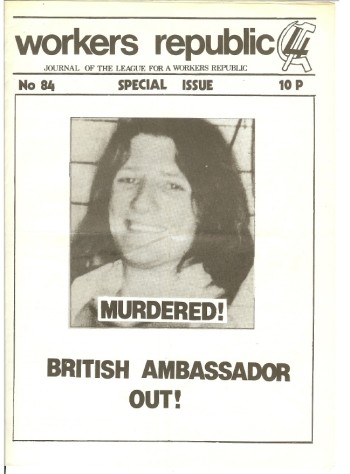 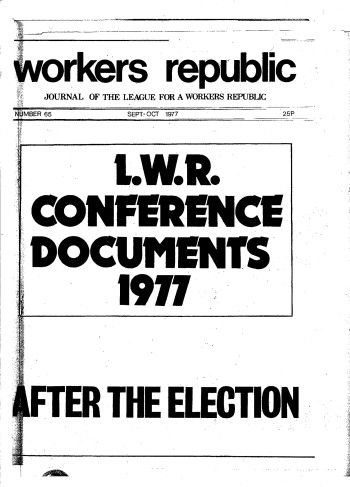 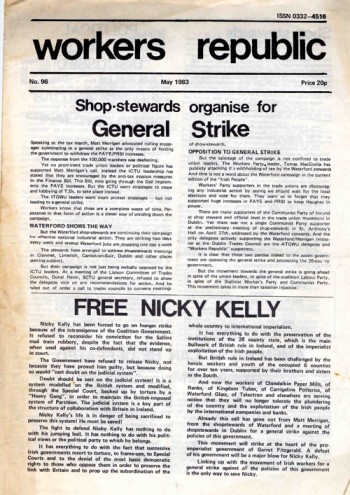 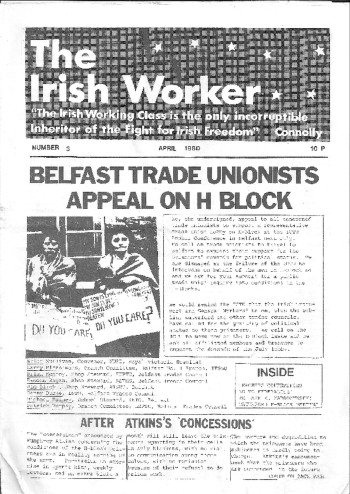 League for a Workers Republic in the archive

The League for a Workers’ Republic (LWR) was a Trotskyist organisation in Ireland. […] It was founded in 1968 by members of the Irish Workers’ Group, which was mainly centred on Irish emigrants to Britain and was itself the result of a previous split in the Irish Communist Group between those, such …

See League for a Workers Republic in the archive