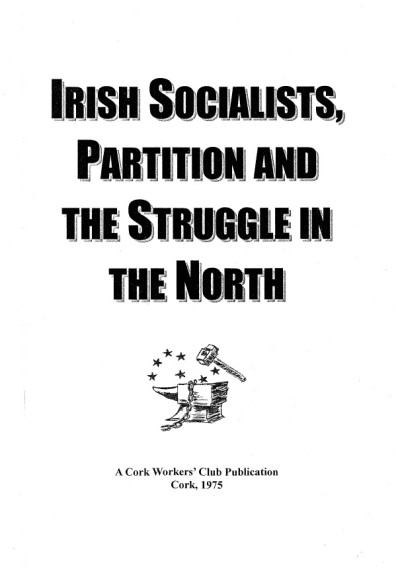 This was forwarded to the Archive by Jim Lane, for which many thanks.

This is a useful document, and a first from the Cork Workers’ Club [and just to note Jim Lane has been very generous in forwarding a range of materials more of which will be appearing in the Archive over the next few months].

The Cork Workers’ Club were assiduous in putting left materials into the public sphere, and particularly their reprints of historical texts. The text that accompanies their Historical Reprints Series is worth reiterating in full:

It is our intention to republish a series of pamphlets and booklets which, in our opinion, are of historical value to the study of the development of the Socialist Movement in Ireland. All publication will be unabridged, and we would like to stress that in publishing them we do not necessarily agree with all the sentiments expressed.

This document is slightly different. The Note accompanying the text reads:

This pamphlet forms the introduction to the Cork Workers Club historical reprint, IRELAND UPON THE DISSECTING TABLE, which is a collection of James Connolly’s writings on Ulster and Partition. Its publication follows wide demand for the Introduction to be published separately as a pamphlet.

The original Introduction was written in 1972, this reprint is from 1975. As always with the Archive the entirety of the text will not be discussed, but it is worth giving an overview of its contents.

The pamphlet takes a strongly oppositional line to partition noting that ‘the abolition of Partition becomes a pre-requisite to the realization of Socialist objects in Ireland’ and continues ‘The whole question is therefore of primary importance to Irish Socialists. One would expect a reasonable consensus of agreement amongst them on it, but instead one finds division’.

The text then engages with ‘three distinguishable, though not mutually exclusive categories’.

Firstly are those who suggest the desirability of removing the Border by peaceful means. That is, the non-revolutionary abolition of Partition on the basis of consent amongst the bourgeoisie. … Secondly are the more revolutionary oriented sector. As to Partition they are generally opposed to it, but are badly divided on what to do about it. They agree on the desirability of demolishing it by eradicating bourgeois rule on both sides of the Border, but cannot agree on how this is to be achieved. … Finally, are those who (as the Chinese would say) are best described as the “Running dogs of Imperialism” in the Irish Socialist camp. This particular species dealt with in the following paragraphs.

The pamphlet then engages directly with “Two Nations” theory and in particular with the Irish Communist Organisation and its Economics of Partition document. In sum a readable critique of other formations during the same period and a useful addition to the Archive. 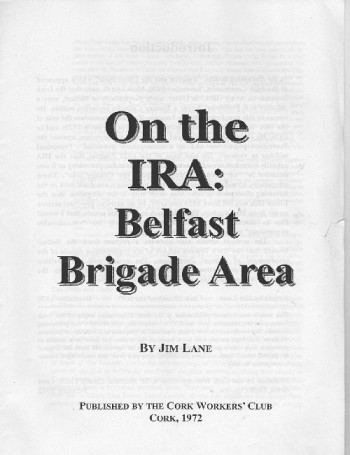 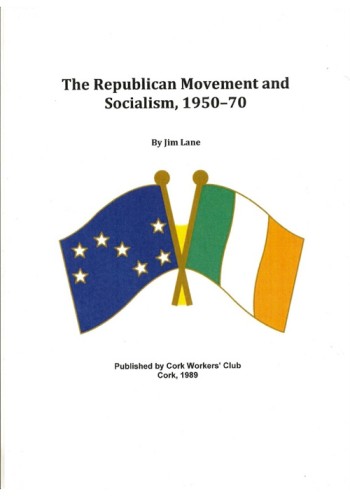 Cork Workers' Club in the archive