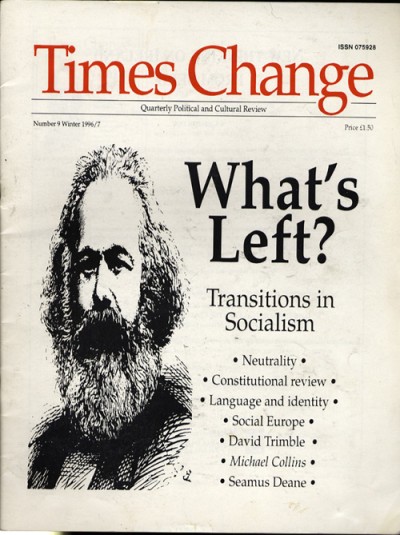 The headline on this edition of Times Change, the Quarterly Political and Cultural Review from Democratic Left, is “What’s Left?” set beside an image of Marx. The subhead is “Transitions in Socialism”. It is an edition from the period when DL were in government with Fine Gael and Labour and therefore permits an insight into some of the issues that exercised the party during that period.

The issue of neutrality looms large in this issue, due to the then recent White Paper on Foreign Policy which contained a proposal to consider participation in the NATO “Partnership for Peace”. The editorial is certainly clear in its adherence to a traditional line on neutrality arguing that proponents of abandoning it ‘fail to make a convincing case’. And inside there is an article from Roger Cole underlining that. However the editorial also argues for ‘disentangling European defensive arrangements, conflict prevention and peace-keeping from NATO by basing these squarely in the UN, the OSCE and the EU’. An interesting paradox is aired by Cole who notes that… ‘the Fianna Fáil party, Democratic Left, the Greens, the Workers’ Party and other groups have opposed the Fine Gael/Labour decision to move closer to the nuclear armed WEU and NATO’. That DL was in coalition with FG/Labour is implicit but left unstated.

Meanwhile there is a further editorial that links to an article by Johan Lonnroth [of the Swedish Left Party] that discusses the ‘challenge to the left’. It asserts that ‘some socialists, will strongly disagree with Lonnroth’s statement that ‘the left is against capitalism, not against the market’.

As an example of a perennial concern of the party the article by Deirdre O’Connell on the Constitution Review Group attests to the strongly social liberal strand within DL.

Another concern, that with Unionism is expressed by Gary Kent’s article on David Trimble. Entertaining, at this remove, to see the line ‘some dissident liberal members [of the UUP]..maintain that [Trimble and his followers] are pushing the UUP towards a hard-right ideology of the Thatcherite type although Trimble votes twice as often with Labour as the Tories’. Remind me again where Trimble sits in the House of Lords? And there’s surely a telling analysis of the state of Ulster Unionism where Trimble’s ‘hard-line reputation could help win the rest of the party… This is why he is sometimes compared to Richard Nixon - the only US President who could recognise Communist China. Other comparisons might include Fianna Fáil as the only party that could intern the IRA..’ and then juxtaposes this with the following…

‘Some of Trimble’s conference themes may have gone over the heads of the audience - decent and solid farming folk in the main. The rhetoric involves inclusiveness - reaching out to the 85 per cent of Northern Catholics who are not what Trimble’s spin-doctor, David Burnside [oh how times change, indeed] called ‘rebels’, making a deal with John Hume, doing business with the South (without infringing sovereignty)…’

As an assessment of the willingness of Ulster Unionism in its then largest form this surely provides evidence that selling a deal to share power with Nationalism was a big ask alone, let alone with Republicanism further down the road.

There’s more - if I can be allowed to editorialise just a little - not least in an analysis of Sinn Féin that verges on the bizarre (given the nature of the events that had occurred already in drawing Republicanism away from armed conflict during the preceding half of the decade) during a review of Brendan O’Brien’s The Long War and M.L.R. Smith’s Fighting for Ireland? The Military Strategy of the Irish Republican Movement.

‘The Provisionals are a long way from undertaking the sort of democratic transformation which would allow us to conclude with confidence that the restoration of a permanent cease-fire and the entrance of SF into non-violent , democratic politics are realistic prospects. It may be that a combination of fudge, wishful thinking and political miscalculation on the part of the current republican leadership has left them bereft of any coherent strategy at present - marooned in an unhappy limbo of non-identity. It will not help matters for democratic politicians in either Dublin or the SDLP to help perpetuate their self-delusions’.

That - contrary to this analysis - a permanent ceasefire would be restored within half a year and that the Good Friday Agreement would be signed a little over 18 months later, is indicative of the usual DL pessimism as to any potential progress, despite the fact that many within its ranks came from a movement that had charted a similar if not identical path away from the use of political violence (and many beyond the party could see that Republicanism had nowhere else to go but cessation and engagement).

And an almost atavistic fear of Sinn Féin is reflected in a review of the film Michael Collins which losing all proportion argues that it is ‘fascist art’ (according to Paul Bew) and ‘at best [it] is an action movie with Blarney; at worst - I hope I am wrong - it is a symptom of the growing cultural power of Sinn Féin’. 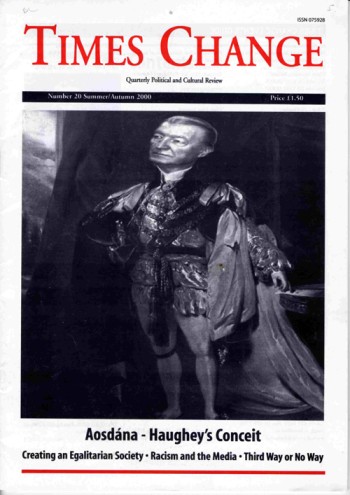