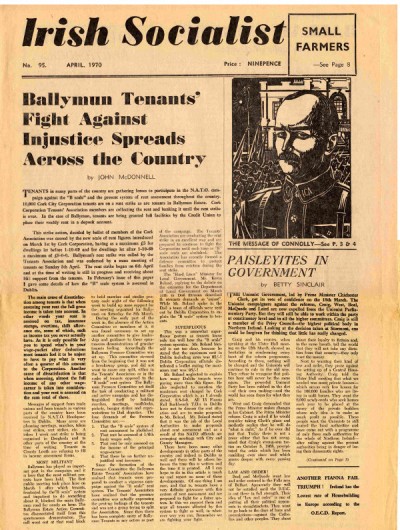 A fascinating document from the Archive here. The Irish Socialist, newspaper of the Communist Party of Ireland, from April 1970. The significance of this is underlined by an article on Page 6 by Michael O’Riordan entitled Communist Party of Ireland Reconstituted. Only a short week or so prior to the publication of this issue the Irish Workers’ Party and the Communist Party, N. Ireland had voted unanimously to merge to reconstitute the CPI. Well worth reading, and not merely for the details such as the attendance of fraternal delegations from the Soviet Union, Rumania, Hungary, Yugoslavia, France, Bulgaria and Britain.

Almost inevitably the cover has a woodcut of James Connolly accompanying the strapline… The Message of Connolly - See P. 3 & 4. And up there in the top right hand corner of the banner is “Small Farmers” advertising a piece on Page 8. Then look at the box in the lower right hand corner which states:

ANOTHER FIANNA FAIL TRIUMPH! Ireland has the Lowest Rate of Housebuilding in Europe according to the O.E.C.D. Report.

The contents is fascinating. Some good analysis from the indefatigable Betty Sinclair (better known perhaps for her NICRA involvement) on the make up of the Chichester Clark led Unionist government. Clear reference to the housing actions, including N.A.T.O. Activities in Ballymun and elsewhere. There’s a ballad on page 2 and Notebook by ‘Northsider’. I’m mighty intrigued by the article on “British Interests Move to Take Over Printing Industry”. There was some presence of the left inside printing during this period. Then we have “The Plight of The Unmarried Mother” “by one of them”. Interesting to reflect on how language has changed.

The Editorial is striking. It argues that ‘Paisley can be a blessing’, since ‘[his] election… Serves notice that Orange Fascism is one again on the march. This brand of Fascism is not the creation of Paisley. It is the creation of the Unionist Party and its imperialist masters. They created it to split the Irish people along religious lines so that they could continue to dominate us’. But… “It would be wrong to see Paisley’s victory as having no positive features. For the first time there is a wide open split in the Unionist ranks. Many who vote Unionist are opposed to Paisley fascism. The opportunity exists to build a movement which will cut across religious barriers for democracy and against fascism.

The real danger is that Paisley will become ‘respectable’ and unite with Fascist forces inside Unionism.”

“Against this alliance a united front must be built to bring democracy and an end to sectarianism in the 6 Cos”.

It’s a thought-provoking analysis, not least because it is almost an inverse of the current dispensation.

Returning to the reconstitution of the CPI I wonder was the pre-existing split on the island into two orthodox CP formations one of the reasons for the development of a larger but similar left wing party in the shape of Official Sinn Féin? Or did it operate in the opposite fashion and did the formulation of a single entity make it more difficult to expand the formations due to the problematic issue of partitionist thinking? 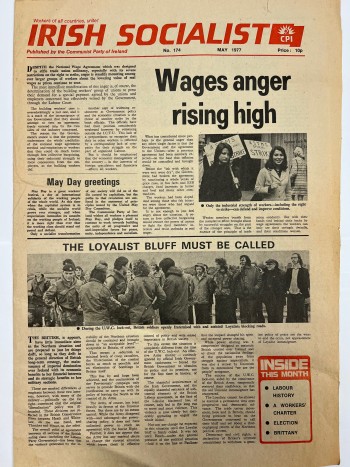 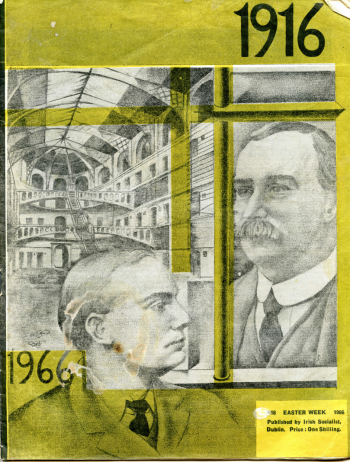 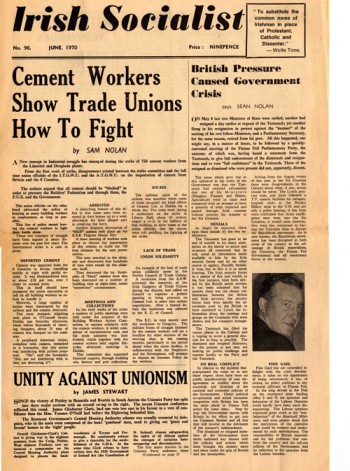