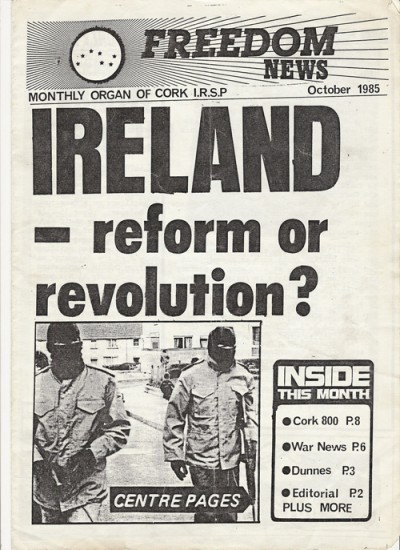 I’m indebted to a contributor forwarding this document - already scanned no less - from the Cork IRSP. Dating from 1985 it notes that:

This is the first issue of “Freedom News”, the voice of Republican Socialism in Cork City. We intend to publish monthly until such time as the Republican Socialist Partys national newspaper resumes production and thus eliminates the need for localised papers.

Worth noting how it states that:

We believe that Marxism-Leninism provides the necessary method, viewpoint and science needed to define the correct strategy and tactics to defeat Capitalism and build Socialism.

There’s certainly a Cork flavour to the publication, from the cartoon about ‘moving statues’ - Ballinspittle being just a short distance from the city - to the news report about how a trip of 35 Councillors to Budapest includes… ‘only 8… From Dublin Corporation… The rest believe it or not, include Cllr’s from Cork County Council, Mayo County Council, Clonmel County Council…’

Then there is the War News section which details how ‘in a direct attack on the infrastructure of the six county statelet the Northern Brigades of the Irish National Liberation Army carried out two attacks on trains in the month of August’ and a gloomy account of the ‘Killeady Bomb’ about a booby-trap bomb ‘meant for the crown forces’ that concludes ‘It was expected that, having seen the hoax bomb, crown forces would clear civilians, including the occuppant of the house, out of the area thus activating the bomb. Unfortunately a local man, having noticed the keg, arrived at the house and detonated the device injuring himself’.

In terms of political analysis there is remarkably little. A centre spread piece “Ireland - reform or revolution” criticises the ‘reformists’ of the Labour Party, Workers’ Party and Sinn Féin, but in no great depth. And this perhaps is explained by the localised nature of the newsletter.

In contrast to the vastly more polished material emanating from its rivals one could argue that it was remarkable that such a document was produced at all.

I usually don’t censor or abridge documents, but there is one page which names some living individuals which I thought on balance it might be better to remove names and identifiers from. My apologies but the CLR has very very shallow pockets should anyone decide to take any legal action against us. 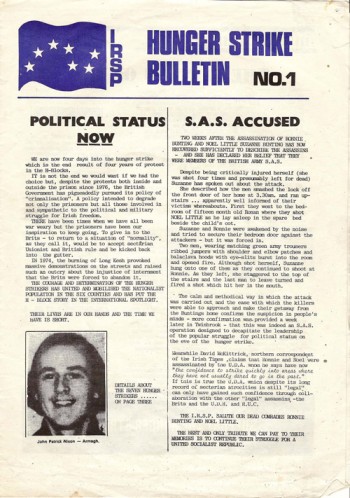 See Freedom News in the archive