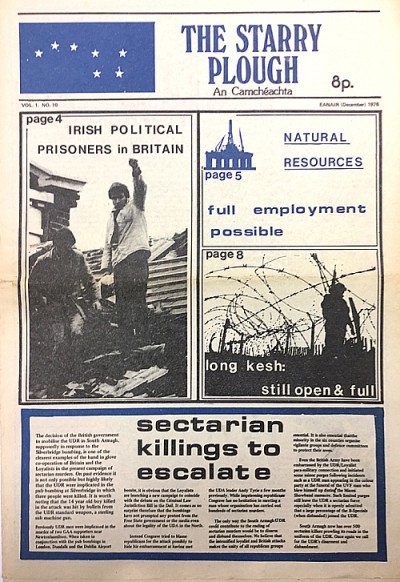 This edition of the Starry Plough is of particular interest. While the front page argues ‘Sectarian Killings to Escalate’, and there are a wide range of articles detailing the plight of prisoners in Long Kesh and prisons in England, perhaps the most important aspect from an historical point of view is the announcement of a “New Army”.

We wish to issue the following press statement on behalf of the Army Council of the National Liberation Army. The NLA was recently formed with the aim of ending British Imperialist rule in Ireland and creating a 32 county Democratic Socialist Republic. As revolutionaries we recognise the paramount necessity for the existence of an armed Anti-Imperialist organisation, which will play an effective role in the current struggle.

We totally reject the right of Britain to interfere in Irish affairs and we are determined to resist any British imposed solution, through the use of armed force against British Occupation Forces and their allies in Ireland.

Notably it also references the feud between PIRA and the OIRA of the previous month;

We continue to oppose British Imperialism in Ireland with all the resources at our command and we call upon all sincere Republicans and Socialists to join us in the struggle. In particular we call upon members of other Anti-Imperialist organisations who are currently involved in destructive and counter revolutionary feuding to recognise the serious damage being done to the morale of the people at the very time when the Imperialists are united in their determination to impose their solution and, when there is a very grave threat of a Loyalist take-over.

A list of actions involving the NLA is then detailed from May to November of 1975.

There is also an article calling for a ‘Broad Front’ to opposed and ‘defeat British imperialism’. This argues that it ‘must include all and any radical and anti-imperialist elements within the country, not only republicans and socialists. In such a front it would be the task of Republicans and Socialists to ensure the leadership of the Broad Front would remain in the hands of the Irish working class’. 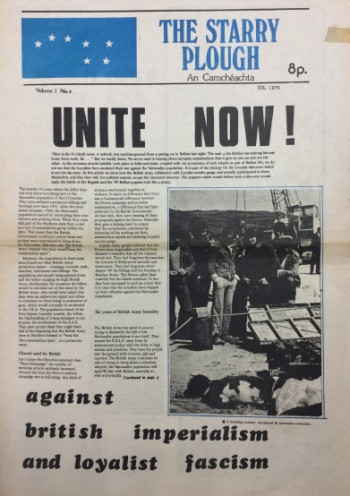