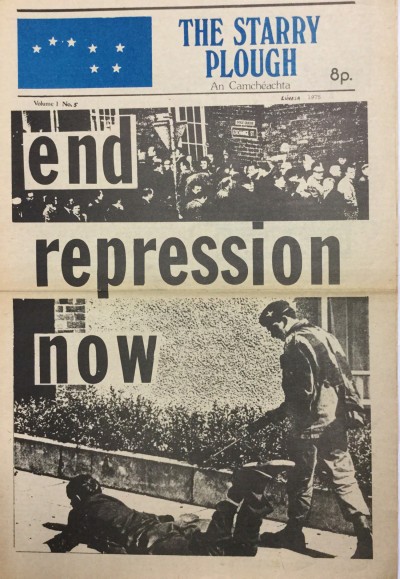 It argues that ‘on a social and economic level, the Irish people are suffering from unemployment, emigration, low wages, rising prices, housing which is not fit for animals etc…on a cultural level the Irish people are being deprived of their culture. the Irish language faces extinction as more and more repressive measures are aimed at it by the Blue Shirts of Fine Gael and the Conor Cruises of the Labour Party. In particular, the granting of open broadcasting rights to the BBC must be opposed’.

An interesting snippet in the Bits & Pieces column notes that:

Members of the IRSP in conjunction with member sod the RMG and PD leafleted all churches in Limerick last month calling for a boycott of an SDLP collection.

There is a piece on the British Orange Link and a report on the ‘hunger strike victory’ in Long Kesh where political status was accepted. Of particular interest is the mention of repression in the South where it reports that 11 members of the IRSP ‘were arrested over a period of a week’. It quotes Seamus Costello as saying that:

The government was trying to give the impression that the IRSP was involved in some way in the Sallins murder and booming. The IRSP reiterates that its as in no way involved and condemns the incident.

It was an obvious attempt by Cooney to give the impression to member of the Official Republican Movement that the IRSP was involved in the attempt to blow up a train carrying OSF supporters to Bodenstown and as such recreate friction between obit organisations at a time when delicate negotiations are taking place.

There’s also a report from Bodenstown which includes extracts from the speech by Seamus Costello. This includes:

Of course the support of the loyalist working-class is essential if we are to have a socialist republic, however their support in the struggle must be sought on the basis of a principled explanation of the correct relationship between the national and the class question.

The divisions which have existed in the anti-imperialist forces are a luxury which we can no longer afford… we can see no evidence that Britain is ready to withdraw.

Other articles include an overview of a ‘European Tour’ by IRSP members and a piece asserting that the CIA used Garret Fitzgerald.