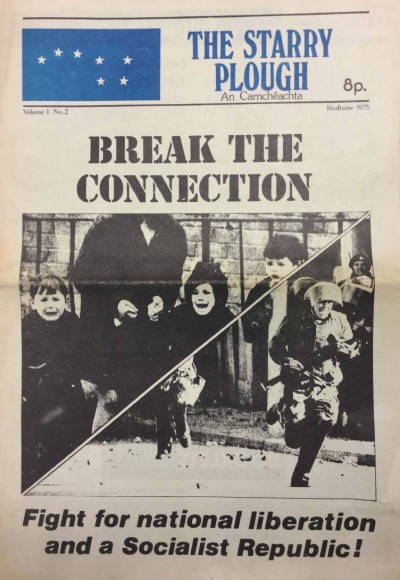 Many thanks to the long term contributor who forwarded this to the Archive. This is the second edition of the IRSP newspaper, the Starry Plough – the first one was posted last month, produced in the aftermath of the split from Official Sinn Féin which precipitated the foundation of that organisation.

The front cover has the headline ‘Break The Connection: Fight for a national liberation and a Socialist Republic!’.

Inside the Eagarfhocal asks ‘Feud or Fascism’ when it outlines a series of murders of IRSP members in Belfast. It argues that:

Previously IRSP members were, in the main, members of an organisation which often won the admiration of the Irish people by exposing and opposing such issues as the corruption of the northern state, the robbery of our mineral wealth, the shocking housing problem in our cities; and so forth. These members were acceptable then, to the Officials’ leadership, and indeed, many were to the forefront in the struggle of the working class.

If the leadership had decided to allow open and free discussion within the Republican Movement, to solve the policy differences that arose from 1970 onwards, probably there would be no IRSP today. But, instead, over period of two years, the leadership carried out a successful with hunt of the opposition to such an extent that only 15 votes were cast against the leadership at its last ardfheis. There was no option for the remaining dissenters but to form a new party.

Still the Officials came after IRSP members and associates to jackboot them into submission and final disbandment. While their typewriters clicked out angry words against British imperialism and its terror troops, their fists and boots tortured IRSP members while their guns gored, crippled and maimed them.

The Officials will not talk to the IRSP although the IRSP has accepted nine different intermediaries, have stood down members in Belfast, demanded a temporary ceasefire of its recent protectors and even offered one national executive member a s hostage to show their goodwill. They will not allow the IRSP the right to form a separate party and let the working class an history judge who is correct.

Even now we would be quite prepared to work with the Officials on any issue which would help to make national liberation and socialism a fact for the Irish working class, rather than hopeful but long term dream.

Articles inside include a piece on Internment which notes that ‘[PIRA] ceasefire or no ceasefire, Internment is here to stay and will continue despite the fact that batches of the internees are being released in dribs and drabs’. There is a report from the ‘First IRSP Ard Fheis which notes that 1000 delegates attended and that ‘visitors, some of them representing other revolutionary groups from at home and abroad, were also present’. It reports that on a discussion on Internal Democracy and Democratic Centralism ‘an amended resolution was overwhelmingly accepted by conference… which permits full freedom for discussion and debate within the party and for maximum unity in action outside the party’. It did however reject factions in the party. It also noted that delegates accepted that the struggle against foreign imperialism and native capitalism is one struggle. Also mentioned was the centrality of equal rights for women.

A long excerpt from Seamus Costello’s chairman’s speech is given. Interestingly it includes the following:

In doing this we recognise quite clearly that the struggle for National Liberation must reach a successful conclusion before we can establish a Socialist Republic.

There is also a piece entitled ‘Who Shot McMillan?’ which suggests that the murder of Liam [Billy] McMillan ‘a member of the Ard Comhairle of Sinn Féin was the work of an ‘agent provocateur’ said Seamus Costello, chairman of the I.R.S.P.’ and that ‘the shooting is particularly sinister in view of the fact that the dispute between the IRSP and the Officials is almost at an end.’

Mr. Jim McCorry, a member of the National Executive of the IRSP said his organisation was in no way involved in the kiling. He had checked with all branches in the city.

Other pieces include an overview of ‘A Victory that shook the World’ that being the offensive by the Khmer Rouge and an account of how the ‘party zooms ahead in south Derry’.