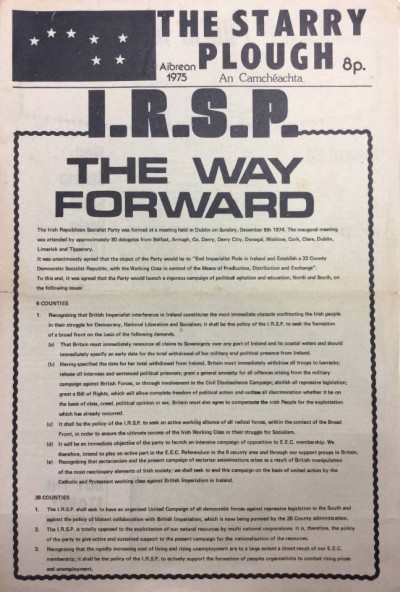 Many thanks to the long term contributor who forwarded this to the Archive. This is the first edition of the IRSP newspaper, the Starry Plough, produced in the aftermath of the split from Official Sinn Féin which precipitated the foundation of that organisation.

The Archive has acquired, and is promised, a range of publications from that year and will post them up across the next sixth monnts in order to offer as full a picture as possible of the events that took place then. Any further materials that are relevant to the Archive in relation to this would be very gratefully accepted – currently we are missing some United Irishman from earlier that year.

On the front page under the heading I.R.S.P. – the Way Forward is an outline of the formation of the IRSP ‘at a meeting held in Dublin on Sunday, December 8th 1974… attended by approximately 80 delegates from Belfast, Armagh, Co. Derry, Derry City, Donegal, Wicklow, Cork, Clare, Dublin, Limerick and Tipperary’.

It notes that ‘It was unanimously agreed that the object of the Party would be to ‘End Imperialist Rule in Ireland and Establish a 32 County Democratic Socialist Republic, with the Working Class in control of the Means of Production, Distribution and Exchange’.

It further outlines the policies of the IRSP in relation to North and South.

Inside it includes a piece with ‘members outlining their reasons for [resigning from Sinn Féin (Gardiner Place)’ and another that notes ‘West German Group Backs I.R.S.P.’

It reports from the first public meeting of the organisation in Dublin in February where ‘Seamus Costello told the meting that the development of class politics in Ireland – which would bring an end to the sectarian murder campaign in the North – could only be achieved by the ending of British interference in Ireland’. Bernadette McAliskey is quoted as saying that the ‘I.R.S.P. was an attempt to create a revolutionary socialist alternative to 800 years of failure’.

The editorial argues that the new organisation ‘is not an organisation intent on fragmenting further the anti-imperialist or socialist forces in Ireland’.

There is a long interview with Seamus Costello in the paper and listings of Easter Commemorations. There is also mention of International Woman’s Year and an Easter Statement from the National Executive I.R.S.P.