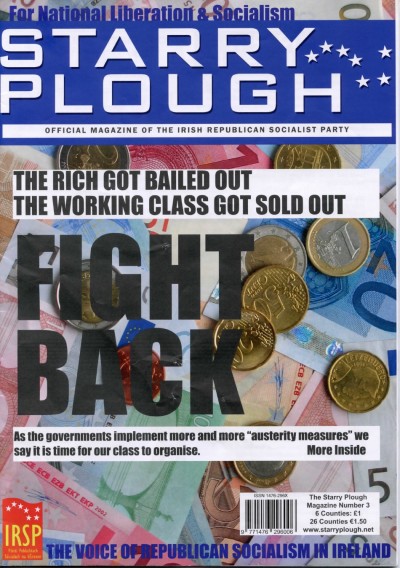 Many thanks to the person who forwarded this document to the archive. It is a further addition to the Archive from this source.

There are a wide range of articles in the magazine including a number of articles on the ‘Occupy’ movement. Another piece asks what happened to the concept of ‘Cradle to the Grave care by the state. There is a reprint of a short essay by James Connolly on Socialism and Irish Nationalism.

Under the heading ‘Looking back at our history’ is an article entitled ‘Learning from Seamus Costello’. This notes that ‘Costello states that the IRSP are ‘a revolutionary socialist party’ whose objectives are ‘a revolutionary socialist state in Ireland’ leaving no doubt whatsoever about the party’s Marxist orientation. He is by no means an isolationist and state state that he regards the Irish Republcian Socialist Movement’s struggle for a democratic Socialist Republic ‘as part of the worldwide struggle for the emancipation of working class people’.

It notes that ‘he clearly sees engagement in liberal democracy as a means to an end, with a view to destroying ‘the confidence of the people in these institutions’ not propping them up or conferring legitimacy on them.

Interestingly the article argues that ‘Costello’s ‘broad front’ has been left open to various interpretations, to a certain extent, though we are able to see unequivocally what it is definitely not, i.e. namely not a pan-Nationalist type front. When Costello was proposing broad front politics in the 1970s the Republican Movement had already split along generally left-right lines, yet both movements ostensibly shared the same goal of a Socialist Republic’.

Other pieces of interest include an article on Máirtín Ó Cadhain, another criticising selective education and organising the unemployed and an intriguing piece on ‘Republican Unity’.

One interesting aspect of the publication are the footers which highlight ‘A world of injustice’ with accounts of inequality and exploitation.