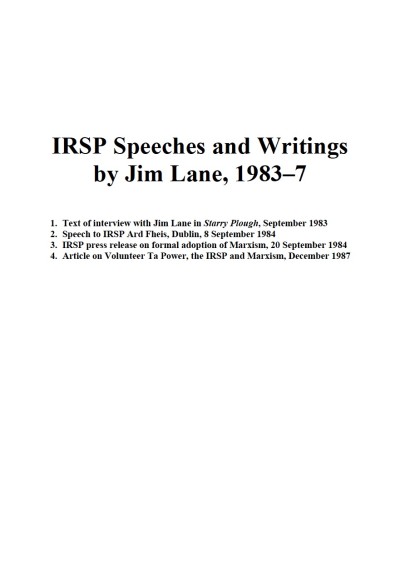 Many thank to Jim Lane for the following very interesting addition to the Archive. In the space of sixteen pages pivotal speeches and writings are compiled into a collection detailing the years 1983 to 1987. These include:

The texts require more forensic analysis, but some quotes from each will give a sense of their contents. For example the interview with Jim Lane asks:

Question: How would you like to see the IRSP developing over the coming year?

Answer: I would like to see greater emphasis on political education within the party. We must research, study and discuss, so as to further develop the necessary revolutionary theory which is required to bring to fruition national liberation and socialism in Ireland. Without revolutionary theory, all our efforts will be in vain. Most of our members have come to a commitment to revolutionary activity out of their experience, be it the naked oppression of British imperialist forces, or the violence of unemployment and bad conditions – North and South. We have never lacked for battlers against oppression. But we would do well to take heed of James Connolly’s observation, The Irish are not philosophers as a rule, they proceed too rapidly from thought to action. It is not sufficient to fight courageously for a cause, it is also necessary to have clarity about the objective for which we strive, otherwise the fruits of our struggle could slip to counterrevolutionaries.

If we fight for socialism today, we don’t want sell-out tomorrow. Yet it could easily happen. Personally, I believe that only a party based on Marxist-Leninist principles can achieve socialism in Ireland.

The Address to the 1984 Ard Fheis includes this passage:

This year we mark the 10th anniversary of the founding of our party. Looking back in objective political terms, there is little to be satisfied with. The most common perception of our party in the eyes of the people is of a party which exists as a shady political front for the INLA. In objective terms, it could be said that almost all the activities, of both the IRSP and the INLA, serve the interest of the Republican Movement. An unkind observer might be forgiven for referring to us as the ‘hind tit’ of that movement – an appendage. It doesn’t really matter how we see ourselves.

Wearing rose tinted glasses to see the situation as we would want to see it, rather than for what it actually is, doesn’t help. Our greatest weakness must surely lie in our failure to move away from left-republicanism to the solid rock of REVOLUTIONARY SOCIALISM. There can be no way forward, no future in a political sense, unless and until, we strike boldly as a party that is primarily a vanguard working-class party. Republicanism has its roots set in bourgeois democracy. It is illogical in this day and age to contend that Irish revolutionaries must struggle to realise a republic with the same political and economic content as that envisioned by our predecessors of 1798. At the end of the day, that is all left-republicanism means in essence, except of course for the empty rhetoric. Not to accept revolutionary socialism as a stage beyond republicanism is to suggest that the world has stood still for nearly 200 years; that economic and political conditions, along with people’s appreciation of them, have remained constant; and that the needs of the people have continued unchanged.

The press release on the adoption of Marxism makes explicit the connection between Republicanism and Socialism.

In embracing the teachings of Marx, Engels and Lenin, we are placing ourselves in line with the most advanced thought of our age and, as a consequence, are in line with the revolutionary tradition passed on by James Connolly. Likewise, we stand in the revolutionary tradition of the United Irishmen of ’98 because they in their time stood for the most advanced thought of the age – bourgeois democracy. At that time, bourgeois democracy represented a revolutionary phenomenon directly applicable to a progressive solution to Irish ills; and as a consequence, Irish Republicanism could be defined as Revolutionary Bourgeois Democracy, tailored to complement specific needs and conditions in Ireland. However, by Connolly’s time, conditions in Ireland and elsewhere had changed and the needs and demands of the people were different than they had been in ’98.

Bourgeois Democracy had ceased to be revolutionary; it had been superseded by Socialist Democracy which to this day dominates the stage of all human endeavour for freedom. Lenin said of this period, “It is evident that the peoples who, between 1789 and 1871, were usually the foremost fighters for freedom, have become, after 1876, under highly developed and ‘over ripe’ capitalism, the oppressors and subjugators of the majority of populations and nations of the globe”.

Irish republicanism has its roots set in bourgeois democracy. It is illogical in this day and age to contend that Irish revolutionaries must struggle to realise a republic with the same political and economic content as that envisioned by our predecessors of 1798. To propose such a thing is to suggest the world has stood still for nearly 200 years; that the economic and political conditions, along with peoples’ appreciations of them, have remained constant; and that the needs of the people have continued unchanged. Yet the failure of Irish separatist parties and movements to move to a stage beyond republicanism (bourgeois democracy) to REVOLUTIONARY SOCIALISM means, in objective terms, the acceptance of such an illogical proposition. Attempts to coat this position with a veneer of left-wing rhetoric, does little to improve the situation; rather, it has the effect of sowing confusion among potential revolutionaries. In essence, left-republicanism and the various forms of Hibernianised socialism, at the end of the day, equate with bourgeois democracy.

Ta’s ‘Analysis’, with its brief background of the Republican Movement in the ‘60s and early ‘70s, is extremely useful to those who seek to understand how and why the IRSM evolved. However, because of the nature of his essay, his background material is brief and therefore limits a proper analysis. It is necessary therefore to expand the readers insight into the historic roots of recent Irish republicanism in general, and its attitude towards communism in particular.*

Simply put, the movement that Séamus Costello and his comrades split from, by this time the Officials, was not a revolutionary socialist organisation. It was not a revolutionary socialist movement gone wrong. That is not to say that there are not some genuine Marxist-Leninists in it struggling for a way forward. The IRSP was, as Ta said, formed by republicans, socialists and trade unionists, not by revolutionary communists. The values of the movement that they emerged from were brought with them, to a large extent, including the prejudices, habits and traditions. Ta Power’s essay on ‘Contradictions’ highlights the problems we have encountered because of this legacy.

There is a clear sense from these documents of the IRSP as both positioned within the local continuum of Republicanism and the international continuum of Marxist thought with figures such as Connolly bridging the two.