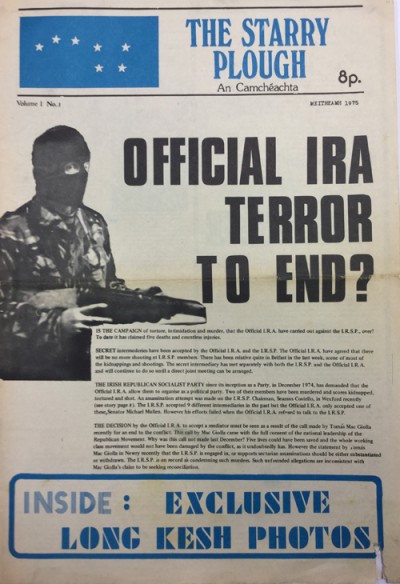 Many thanks to Spailpín who forwarded this to the Archive. This is the third edition of the IRSP newspaper, the Starry Plough from the 1970s – and part of a sequential release of them given that they were produced in the aftermath of the split from Official Sinn Féin and also deal with the dispute between the two organisations subsequent to that.

The front cover has the headline ‘Official IRA Terror to End?’.

Inside the Eagarfhocal asks ‘Feud or Fascism’ when it outlines a series of murders of IRSP members in Belfast.

Is the campaign of torture, intimidation and murder, that the Official IRA have carried out against the IRSP over? To date it has claimed five deaths and countless injuries.

Secret intermediaries have been accepted by the OIRA and IRSP. The OIRA have agreed that there will be no more shooting at IRSP members. There has been relative quite in Belfast in the last week, scene of most of the kidnappings and shootings. The secret intermediary has met separately with both he IRSP and the Official IRA and will continue to do so until direct joint meeting can be arranged.

The IRSP since its inception as a Party, in December 1974, has demanded that the OIRA allow them to organise as a political party. Two of their members have been murdered and scores kidnapped tortured and shot. An assassination attempt was made on the IRSP Chairman, Seamus Costello, in Wexford recently. The IRSP accepted 9 different intermediaries in the past but the OIRA only accepted one of these, Senator Michael Mullen. HOwever, his efforts failed when the OIRA refused to talk to the IRSP.

The decision by the OIRA to accept a mediator must be seen as a restyle of the call made by Tomás Mac Giolla recently for an end to the conflict. This call by Mac Giola came with the full consent of the national leadership of the Republican Movement. Why was this call not made last December? Five lives could have been saved and the whole working class movement would not have been damaged by the conflict, as it undoubtedly has. However the statement by Tomas Mac Giolla in Newry recently that the IRSP is engaged in, or supports sectarian assassinations would be either substantiated or withdrawn. the IRSP is on record as condemning such murders. SUch unfounded allegations are inconsistent with Mac Giolla’s claim to be seeking reconciliation.

Other pieces include an editorial arguing the ‘North must oppose the EEC’, another on a 10 year old shot at during ‘the present conflict’, an appeal to boycott the then forthcoming Convention Election in Northern Ireland and further reports from the extended IRSP Ard Fheis.

There’s an interesting overview of the truce between the Provisional IRA and the British government of that year as well as some analysis of the genesis of PIRA which argues that ‘the Republican Movement… could not have split.. without the widespread support of substantial sections of the Northern minority’. There’s also photographs from IRSP members in Long Kesh on May 1st. A photograph of IRSP members in Dun Laoghaire suggests that there is a ‘growth of IRSP’ in that town. There’s part of a continuing series on Capital in Crisis and an article on ‘Portugal – Another Chile’.

One small piece on the last page notes;

The IRSP is now a registered political party. This should convince all that we are a genuine political party and will refute allegations made in the past that were were a mere ‘splinter’ group from the Official Republican movement.