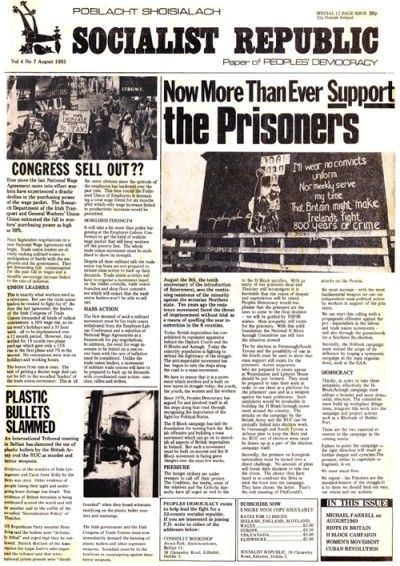 Many thanks to the persons who scanned and forwarded these documents.

This edition is posted up on the 35th anniversary of publication. A twelve page document it encompasses a significant range of materials – but perhaps inevitably it is the hunger strikes protest which is focused on most. August 1981 was the month the last of the ten hunger strikers died – Michael Devine of the INLA.

The main article on the front page argues that:

The H-Block campaign has laid the foundation for turning back the British offensive and building a mass movement which can go on to demolish all aspects of British imperialism in Ireland. But such a movement is facing grave dangers over the next few weeks.

The hunger strikers are under pressure to call off their protest. The Coalition, the media, some of the relatives and the Catholic hierarchy have all urged an end to the H Block sacrifice. With so many of our prisoners dead and Thatcher still intransigent it is inevitable that the voices of despair and capitulation will be raised. PD would emphasise that the prisoners are the ones to come to the final decision – we will be guided by THEIR wishes. Mass sympathy still exists for the prisoners. With this solid foundation the National H Block Armagh Committee can still turn the situation around.

It notes the political situation.

The by election in Fermanagh/South Tyrone and the possibility of one in the South must be used to show that mass support still exists for the prisoners. Active supporters who are prepared to create uproar in Westminster and Leinster House should be put forward. They must be prepared to take their seats in order to use them as a platform for the prisoners’ case and as a weapon against the hack politicians.

But it is also fair to note that the scope of the articles is wide. One on the front page asks “Congress Sell Out??” criticising the Irish Congress of Trade Unions for apparently settling for the National Wage Agreement. Another is entitled ‘Plastic Bullets Slammed’.

A long article inside notes how ‘Bottom Dog unites Limerick anti-imperialists’ – discussing the impact of the Bottom Dog workers paper, edited by Joe Harrington, a member of PD. Another couple of pieces critique Jim Kemmy and Socialists Against Nationalism. Another looks at the riots in Britain during this period and asks ‘what lies behind this new combativity among British youth?’.

In relation to H-Block in addition to further articles on the issue it calls for a ‘United H-Block Candidate’ in Fermanagh. But there’s a further line in a piece on the ‘Republican Movement’ that notes;

The leadership of the campaign [H-Block] is, of course, the Republican Movement; it is one of the ironies of history that the Republicans, who have for so many years been arguing against PD in a debate about ‘Mass Action versus Militarism’ should know find themselves at the head of a mass campaign based loosely on the PD model.

The fact that an organisation based on belief in the supremacy of military struggle should lead a mass campaign is, of course, a source of problems.

PD does not believe that these problems are insurmountable inside a united campaign.

But it does criticise ‘political sectarianism in the Republican Movement’ and calls for ‘a campaign which gives democratic representation to the political parties, the action committees, the trade union and factory committees as well as cultural and sporting bodies, women and youth will be able to draw on a wealth of experience in formulating a strategy for victory.

There is much else including Socialism and Nationalism: the Legacy of Connolly, criticism of SFWP for Joe Sherlock TD not voting against the then Coalition budget, which argues that this flows from ‘the very logic of the SFWP programme. The essence of this programme is a denial of the relevance of the national question’. Michael Farrell offers a recollection of August 1969, Sue Jackson writes on the Programme to Unify the Womens Movement and there is an article on ‘How Coalition Deceives Women’ and another on Feminist Anti-Imperialism – A Double Sided Task. A report on the ‘banning of a Gay Society in UCC’makes common cause with Gay people.

On international matters there are reports on Cuba, Iran and Poland. 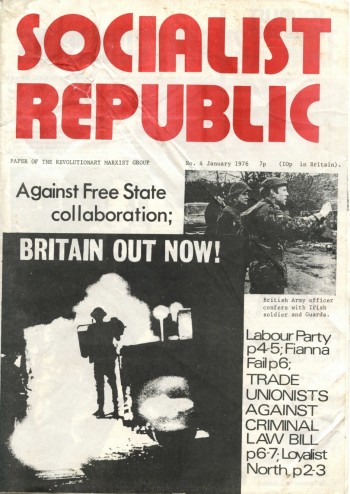 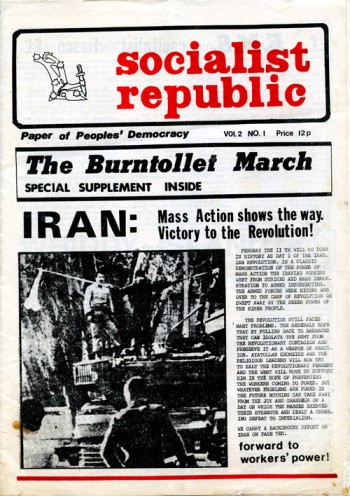 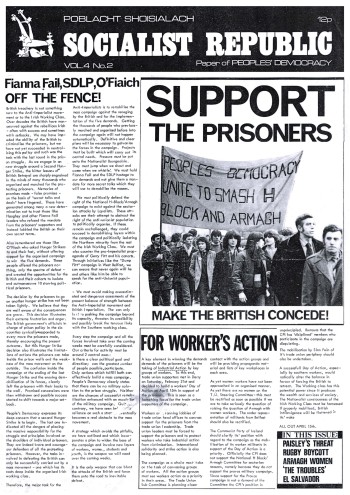