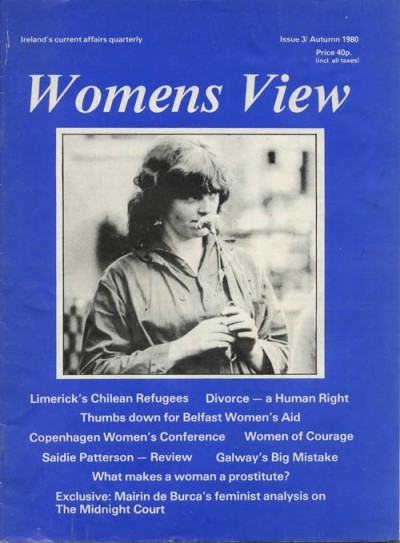 It’s appropriate with International Women’s Day on Sunday that we post this very welcome addition to the Archive which was donated by Áine Mannion, one of a number of documents that will be posted up over the next year, and for which many thanks.

Women’s View was a magazine produced by Sinn Féin – The Workers’ Party in the early 1980s. Designed in a news magazine format, effectively A4 in size while not full colour it did use large photographs throughout and therefore is of a piece with other publications from SFWP/WP during this period.

There’s a very broad range of articles in the magazine and it is notable for a lack of focus on the party – although as it notes on the inside page it is:

Published quarterly by the National Women’s Committee of Sinn Féin The Worker’s Party.

It also contains an article on the SFWP campaign for Divorce.

The contents includes pieces on Chilean Refugees in Ireland, Family Planning Services – A World Survey, Women and Sexuality: A feminist analysis of the Midnight Court, Women in Trade Unions and Positive Action, a report from the UN International Women’s Conference, a ‘Thumbs down for Belfast Women’s Aid’ and ‘Galway’s Big Mistake’. Contributors include Maura McInerney, Mairin de Burca, Patricia Redlich and Hilary Rock. There are book and television reviews, regular columns and news from abroad and Ireland.

Congratulations are given to Inez McCormack, who it notes ‘is the first woman to be elected to the Executive of the ICTU’ and as it notes ‘roll on the day when the election of women to such positions will cease to be a two-day wonder’. It also notes that men were now allowed to join the previously ‘all-female Irish Women Workers’ Union’.

It notes that ‘there are no equal rights for Northern Ireland’ in relation to abortion; that in a survey of Family Planning clinics only in Ireland and Bolivia were they illegal and it notes that ‘awareness is growing that among the hazards of work for women is the persistent problem of sexual harassment’. The column ‘A Woman’s Work’ by Maire Leydon offers an insight into working conditions in West Germany for women in ‘traditional female employmetns such as small, light goods factor(ies)’ and notes:

Work began at 6 am and continued until 2 pm with a 20 minute break in the eight hours! Frequently threw as compulsory overtime and this ended at 5 pm; Because of the exploitative nature of the owners, there was no extra pay for such work. The security of immigrant workers’ employment is always precarious and the owners often intimidated the workers through this means.

Other pieces reference how Ireland had ‘declined to ratify the Convention on the Elimination of Discrimination against Women’ adopted by the UN General Assembly in 1979.