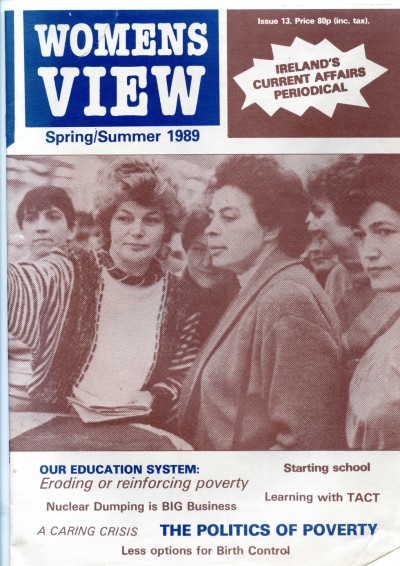 This is a later edition of Womens View, the womens publication of the Workers’ Party. In 28 pages it covers a broad range of issues and there is an overt linkage to Workers’ Party political activity with the inside front page that includes photographs of WP European Election candidate (and later Independent left TD Catherine Murphy).

Under the heading Equality News there are short pieces on a range of topics including Labour Court rulings on Telecom Eireann women workers on the issue of equal pay, European Community guides to ‘positive action programmes’ and mention of what appeared to a discriminatory attitude to women gardai by that organisation.

Notable is a focus on women in Tallaght, including a full page piece on Tallaght Adult and Community Training. which notes that ‘for women their participation in adult education is a springboard for becoming involved in their community’. This also notes the opening of a Tallaght Women’s Contact Centre due to the efforts of combined women’s groups since 1984.

Another piece examines links between education and inequality and the impact on women in particular – part of this notes that ‘working class girls have even less chance than working class boys of participating in third level education’. Included in this are the personal testimonies of parents one of whom sent her children to a Gaelscoil and another who sent her son to a non-denominational and co-educational school.

Mary MacMahon gives a view from Northern Ireland on the Milan Conference of Women of the European Left, which positions the struggles of women in the very particular context of the North. This makes an interesting point:

The Ireland Fund, established as part of the Anglo-Irish Agreement is seen as little more than an SDLP slush fund, pushing Yankee dollars into the hands of private entrepreneurs in the areas they regard as politically important.

She concludes by stating that:

Discrimination can be declared illegal; ridding the member states of sexist attitudes is altogether another thing.

Rosheen Callender writes on how ‘Poverty is a political issue’ and other articles address Sellafield as well as issues addressing carers.