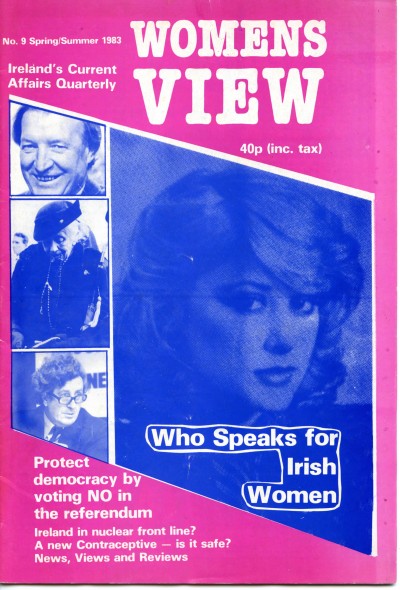 Many thanks to Aine Mannion for forwarding this.

This publication of the Workers’ Party is 32 pages long and joins other copies in the Archive.

The main concern is the anti-amendment campaign with regard to the referendum on abortion. A page outlines why ‘we oppose the amendment’. It argues that…

The Workers’ Party is totally opposed to the proposal to amend the Constitution so as to include in it the prohibition on abortion that already exists under law in this country.

It notes that The WP has opposed the holding of this referendum since it was first suggested.

All of our candidates in the recent General Elections refused to give commitment to support this referendum. We were the only major party to take this stand. Unfortunately other politicians surrendered to the lobbying of the intolerant group which wants this amendment and gave a commitment to hold the referendum.

A speech on the issue by Tomas Mac Giolla in the Dáil is quoted:

There is no doubt that while most Irish people are opposed to abortion they also feel very strongly that the life in the womb, in all justice, cannot possibly have a stronger claim on life than the woman concerned…

Other pieces examine how ‘Nicaraguan Women lead the way’, another on the unionisation of home helps in Belfast, another on ‘Ireland in the Front Line’ in relation to CND. Another piece looks at the life of Ruth First, anti-apartheid activist in South Africa, there’s another on ‘a study of battered women in Northern Ireland’. There’s also reports on the teachers unions.

There’s also a report from the Dunnes Stores picket lines where WP women were in support.

A timely addition to the Archive.