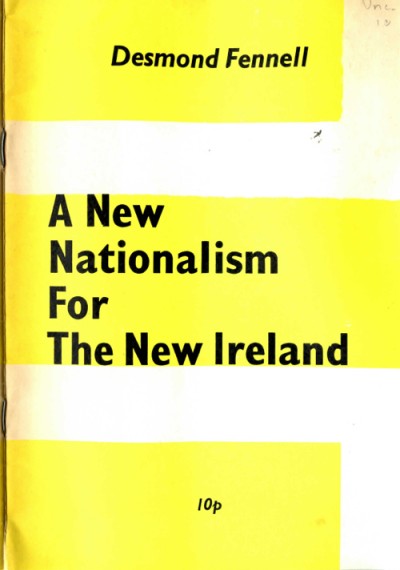 This document, issued under the imprint of Comhairle Uladh (Council for Ulster), which was in effect linked to Provisional Sinn Féin, is of some interest to the Archive offering an insight into those who were associated with various political and national campaigns during the 1970s. According to Robert William White’s biography of Ruairí Ó Bradaigh, Comhairle Uladh was based on ideas which Ruairí Ó Bradaigh and Dáithí O’Connell had proposed for a regional parliament for Ulster (incorporating nine counties) as part of a federal Ireland. To this end they had in 1970-71 invited various strands of political opinion including nationalists and unionists to a conference in Monaghan. While the SDLP declined the invitation a number of others including NICRA representatives did turn up. At the conference there were two proposals, one put forward by the PIRA Army Council for a Dáil Uladh and the second for elections to Comhairle Uladh as a means of promoting the first proposal. Both were passed unanimously. Fennell, according to White, came from a position somewhat different to the Comhairle Uladh concept, suggesting that a self-governed Ulster under Irish and British joint control might be a way forward, but as an observer to the meetings he later became more involved in the idea. Indeed White notes that he organised a similar conference in Connacht attempting to establish a Comhairle Connacht (interestingly White says that one of those who spoke at a Comhairle Connacht meeting in UCG was Michael D. Higgins).

As the document itself notes on the first page, “Comhairle Uladh seeks the establishment of Dáil Uladh – A Parliament of Ulster – within a New Irish Republic restricted with strong regional governments.”

In addition Comhairle Uladh – Council for Ulster – promotes cooperation with the Civil Disobedience Campaign in the North, endeavours to co-ordinate the relief of distress and suffering in that area and works for the release of all political prisoners.

Some 28 or so pages long the pamphlet covers a broad area. It is worth pointing out that it is not a left-wing document as such though implicit and explicit at times is a position that is in opposition to ‘liberal capitalist individualism’. It engages glancingly with Marxist socialism.

It argues that there is a ‘need for a humanist nationalism’ which it argues is reflected in Comhairle Uladh in ‘two strains’. These it is contended are:

The members of the Comhairle have been brought together by their concern for the Irish nation, whether as a reality to be asserted and realised or as a ruin to be reconstructed. Their nationalist concern is reflected in the literature issued by the Comhairle. But at the same time, reflected in the same literature, there is a humanism which regards the centralised, bureaucratic state, and the lack of real self-government which goes with it, as anti-human and anti-people. On these grounds, it advocates their replacement throughout Ireland by real self-government at three levels of society under an all-Ireland parliament and government.

In the conclusion it asserts:

The value of having an Irish community of communities as the overriding goal of Irish nationalism is that it challenges every kind of Irishman to be a nationalist in some sense. It makes the nation the highest value, within Ireland, that an Irishman can work for whatever his special talent.

It gives us, moreover a measure by which to discern which are the pro-national, which the anti-national, forces and institutions in Irish life. The measure is the simple question: are they contributing to or impeding the development of an Irish community of communities.

Straight away we notice , for instance, that the structure of the Catholic Church, with its team of self-appointed officials administering a powerless mass of laity, is as anti-national as the Dublin state. We see that the Presbyterian church structure is more conducive to community-building, but that Presbyterians, like other Protestants, are anti-national in their conformity to liberal capitalist individualism, and liberal capitalism generally.

As for the economic structures, there is little for us to notice that has not been observed already. The fact that they are anti-human, anti-community and anti-national has been pointed out many times.

Comhairle Uladh (Council for Ulster) was formed in the early 1970s, and sought the establishment of a Dáil Uladh.…

See Comhairle Uladh in the archive