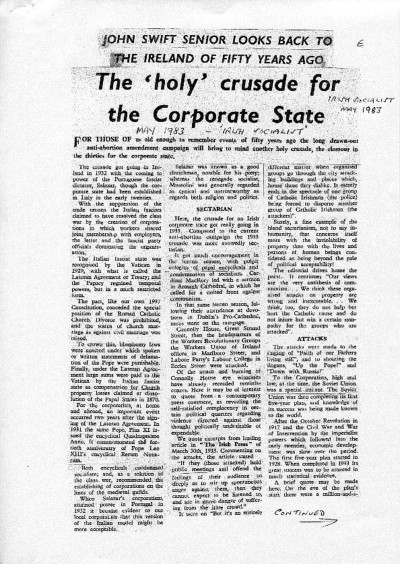 Please note: This document was added along with other articles by John Swift from Irish Socialist. The text below refers to them all.

Many thanks to the person who forwarded these to the Archive. They are articles from Irish Socialist, printed by the Communist Party of Ireland in the 1980s, penned by left wing trade unionist and long time Labour Party member, John Swift.

Swift, born in 1896 had a fascinating life, active in the Irish National Federal Union of Bakers, briefly a member of the Irish Volunteers and essentially forced into the British Army late in the First World War. Returning to Ireland he continued his participation in union activity, one key component being the establishment of a bakery school (later taken over by the VEC in Dublin). By 1936, and with the INFUB renamed the Irish Bakers, Confectioners and Allied Workers Amalgamated Union, he was active as national organiser. In the early 1940s he was elected as General Secretary. However his involvement in union matters extended much further, and in 1945 he became President of Dublin Trades Council. The next year he was President of the Irish Trades Union Congress and was instrumental in the establishment of The People’s College. Later he was president of the International Union of Food and Allied Workers’ Association.

A left-wing member of the Labour Party from 1927, he wrote the policy document on Workers Democracy which can be found here in the Archive. In the 1970s he was active in support of membership of the EEC by the Republic of Ireland. He was also a founder of the Ireland-USSR Society. Later he was President of the Irish Labour History Society. He died in 1990.

Further information on him can be found in John P. Swift’s biography, ‘John Swift, an Irish dissident’.

The documents collected here date from 1983 to 1986 and all were published in Irish Socialist. They range in subject matter from a retrospective look at the Ireland of fifty years previously, to ‘The De-politicisation of Big Jim Larkin’, ‘The fight for the Sixty-hour Week’ and ‘How the Bakers’ library came to be blessed’. Some were printed as part of a series entitled ‘Reflections on Labour History’. They provide a compelling overview of the Irish Left from one who was centrally involved in it. 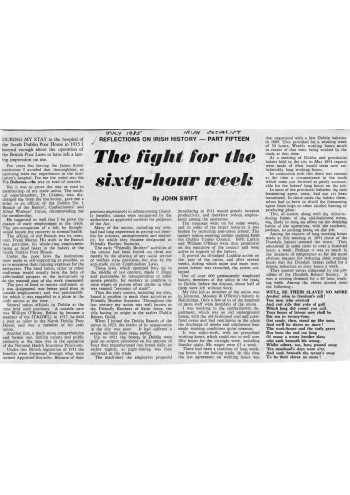 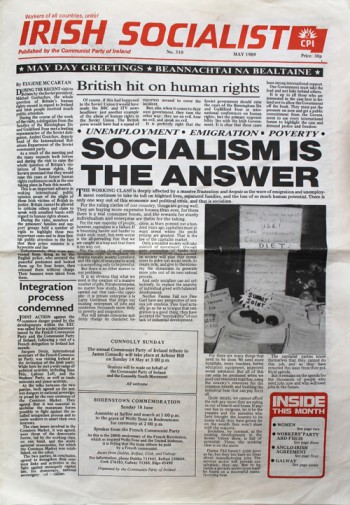