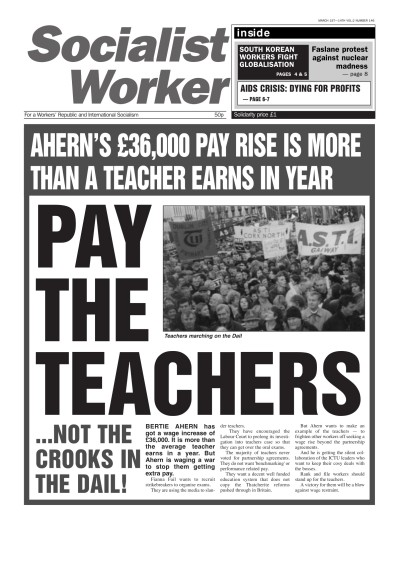 This edition of Socialist Worker from the SWP has a broad range of pieces, from a front page story entitled ‘Pay the Teachers’ to articles on workers standing up to globalisation and health workers ‘united against Loyalist threats’. It is strikingly a publication from a pre-9/11 world, though there is mention of the then no-fly zones over Iraq.

A piece argues that refuse charges are a Green tax. And there are quotes from various people including Finian McGrath, then an independent councillor, against Bin charges. The paper on the last page looks to ‘Globalise the Resistance’ and ‘Drop the Debt’.

There is a column on ‘Where We Stand’. This notes:

Workers create all the wealth in capitalist society. A new society can only be constructed when they collectively seize control of that wealth and plan its production and distribution.

FOR REVOLUTION, NOT REFORM

The present system cannot be reformed out of existence. Parliament cannot be used to end the system. The courts army and police are there to defend the interests of the capitalist class not to run society in a neutral fashion. To destroy capitalism, workers need to smash the state and create a workers’ state based on workers’ councils.

FOR REAL SOCIALISM, EAST AND WEST

The SWP welcomed the break-up of the USSR and the end of the East European dictatorships. These states were not socialist but were run by a state capitalist class. We are against the domination of the globe by imperialist powers and we oppose their wars.We are for the right of all nations, East and West, to self-determination.