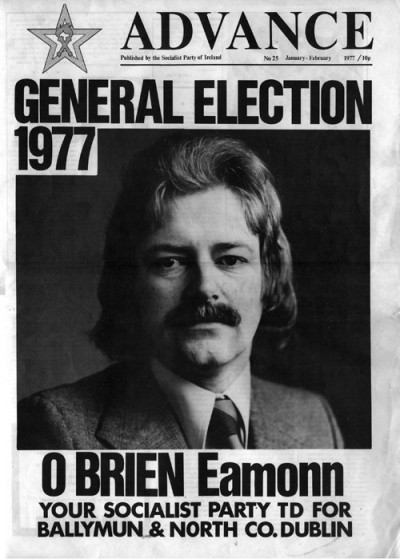 As 2007 wanes, let’s cast our minds back some 30 odd years to the heady days of 1977. The year of punk, of monarchist celebrations in the UK, a failed UWC strike. And here in Ballymun and North County Dublin we have - by way of an anonymous donation - the newspaper of the Socialist Party of Ireland from 1977. Now, it’s important to make a distinction between the SPI in 1977 and the CWI orientated SP of today. The SPI was - as a most informative, and seemingly broadly accurate wiki  entry says - a sort of proto-split from Official Sinn Féin established in 1971. The SPI regarded OSF as insufficiently Marxist (one wonders at who was the ultra-leftist jibe directed - step forward Mr. Costello). However, it also considered the CPI unworthy as a Marxist party.

What is interesting is that this line led it in a curious trajectory towards engagement with a number of other groups such as the indefatigable British and Irish Communist Organisation who found like minds as regards Provisional Sinn Féin and the national question. What is of particular interest is the strong emphasis on social rights issues. The SPI campaigned for divorce, contraception and abortion.

The end point of the trajectory was the Democratic Socialist Party with Jim Kemmy, where much of BICO also ended up. Still, I knew people in the WP in the early 1980s who had joined between 1977 and 1982 in some numbers.

The wiki entry says that Eamonn O’Brien, who in this edition of Advance is lauded as the SP TD for Ballymun, managed to get 6% of the vote in Dublin County North at the election and that ‘this encouraged OSF on the parliamentary road’. Well, yeah. Perhaps. Although I seem to recall a spot of bother in 1969 over abstention which might have had a bearing on OSF’s position long before 1977.

Advance is in fact quite a professional production. The design is good. Kudos to them for the star and torches logo. I’m wondering where they swiped that particular formulation from. There is a strong, and remarkably positive, emphasis on local issues. Internationally there is an identification with Moscow line parties and a run-down of some of the glories of the centrally planned Eastern European economies. There is little mention of PSF or PIRA, but the editorial speaks of:

…the Party [making] the most determined effort yet to eliminate bourgeois nationalism from the labour movement. Its realistic policy self-determination and democratic renewal for the people of Northern Ireland is proven more correct every day as the various paramilitary groups produce ever more futile mutual slaughter and destruction. However, it is still the case that many people with progressive and socialist ideas remain blinded by bourgeois nationalism and have departed completely from Marxism-Leninism in order to favour one or other of the competing paramilitary groups.

The cynic in me suggests that this was a deliberate downplaying of their more scarifying policy on the North for electoral purposes. But perhaps there is another reason. In fairness it seems like a better read that the Irish People posted up in the Archive earlier in the year. But then, the cynic in me also suggests that that wouldn’t be difficult. 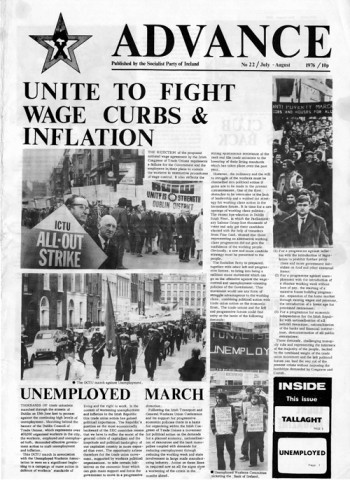 Advance in the archive

See Advance in the archive