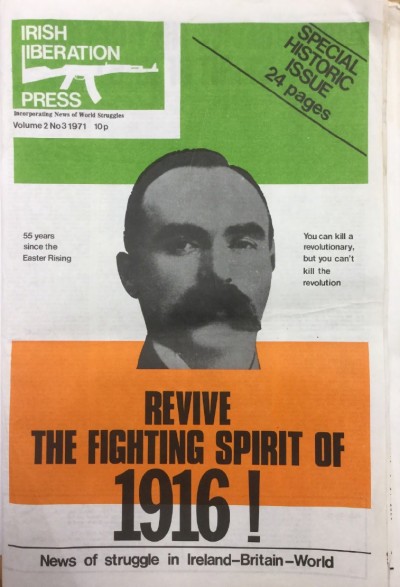 Many thanks to Bobcat for forwarding this and other documents to the Archive. This is a fascinating document from the Irish National Liberation Solidarity Front, an essentially Maoist group operating in the UK. Quite some information regarding the INLSF and its publications can be found online, including here at marxists.org  and here about the Communist Workers League of Britain (Marxist Leninist) . As Wiki notes:

The CWLB arose from a split in the Revolutionary Marxist–Leninist League (RMLL). Ed Davoren, founded the CWLB in 1969. Like the RMLL, the CWLB saw solidarity work as the key to party-building. It set up and initially worked only within the Irish National Liberation Solidarity Front (INLSF). It presumably decided this was a dead end, for, without any acknowledgement of its activities within the INLSF, the CWLB commenced in 1972 to work under its own name, publishing a journal Voice of the People.

The roots of the organisation lay in the Revolutionary Marxist-Leninist League led by A. Manchanda. A split in the RMML in August 1969 saw about half the RMLL membership leave; some led by Harpal Brar formed the Association of Communist Workers. Others, led by former RSSF student leader Edward Davoren, founded the Irish National Liberation Solidarity Front in September 1969.

The Irish National Liberation Solidarity Front was a broad campaigning organization which produced the Irish Liberation Press, a paper for Irish workers in Britain, starting in March 1970. In 1972, the INLSF decided to shift its focus to organizing the working class at the point of production and the Communist Workers’ League of Britain (ML), which had previously been operating as the driving force within it, went public. In turn, the Irish Liberation Press was renamed the Voice of the People in March 1972; Davoren retired from active political involvement that autumn.

Irish Liberation Press, which was the output of the INLSF, was a surprisingly lavish document, A3 in size and running to multiple pages. This edition is 24 pages long. Produced commemorating the 55th anniversary of the Easter Rising the editorial demands that readers ‘Revive the Fighting Spirt of 1916!’. In the editorial it discusses Connolly in the context of 1916. It suggests that:

A Peoples war is alone the invincible instrument of Irish national liberation. The urgent need for the taking of these steps is coming home to more and more Irish workers. In this way will the anti-imperialist banner of the heroic Irish people prevail over the reactionary tattered banner of the imperialist domination.

There is an overview of the INLSF, noting that it was formed on Saturday 27th September, 1969. It also notes that ‘the organisation holds regular education and discussion meetings and classes. revolutionary theory and practice must o hand in hand. The organisation has held many mess rallies an demonstrations during the past year, and also street meetings in the ghetto working class areas. Mass meetings are also held in the summer at Speakers’ Corner, Hyde Park, a place frequented by many Irish immigrants. INLSF workers learned photography and built a photographic exhibition covering the struggle in Ireland from the peasant revolt of 1798 up to the present time. INLSF workers write, design and part-produce this newspaper which is sold throughout London, Coventry, Birmingham and other major industrial areas in Britain as well as in Ireland.

Here from marxists.org  is a slightly later statement by the INLSF ‘concerning the Irish Republican Army and Sinn Féin’ which notes:

The Irish National Liberation Solidarity Front (INLSF) was set up in 1969 as a campaign group by the Communist Workers League of Britain (Marxist–Leninist) (CWLB (ML)), which arose that year from a split in the Revolutionary Marxist–Leninist League. It published a journal called the Irish Liberation…

Irish Liberation Press was published by the Irish National Liberation Solidarity Front (INLSF) between 1970 and 1972. It ceased publication when the Communist Workers League of Britain (Marxist-Leninist), who had set up and worked within the INLSF, switched their focus to working under their own nam…