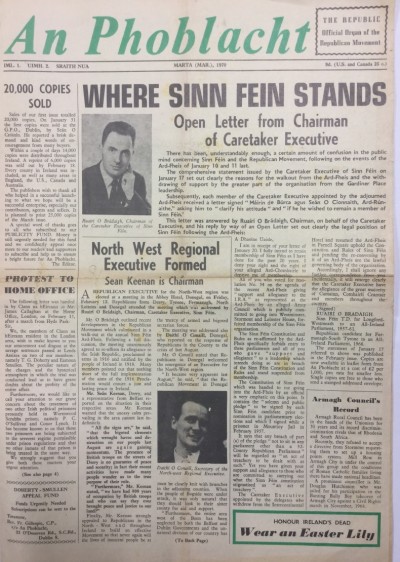 Many thanks to Spaílpín for donating this issue of An Phoblacht to the Archive. It offers a very useful insight into the period during the split in the Republican Movement in 1969/1970. Furthermore with an article on the meaning of 1916 it provides a good starting point for the materials being posted to the Archive over the next five weeks which will be comprised of publications referencing or being focused entirely on the events of 100 years ago.

This edition of An Phoblacht from Provisional Sinn Féin is notable for how it engages directly with the split in the Republican Movement earlier that year. An Open Letter from Ruairí O Brádaigh, in his role as Chairman of the Caretaker Executive of Sinn Féin outlines as much:

I fully intend to retain membership of Sinn Féin as I have done for the past 20 years. I deny your right and the right of your alleged Ard-Chomhairle to deprive me of membership. All of you who voted for resolution no.54 on the agenda of the recent Ard-Fheis giving ‘support and allegiance to the IRA’ as represented at the Ard-Fheis by an alleged Army council which is publicly committed to going into Westminster, Stormont and Leinster House, forfeited membership of the Sinn Féin organisation.

He notes the rules of the Constitution and then:

The Caretaker Executive appointed by the delegates who withdrew from the Intercontinental Hotel and resumed the Ard-Fheis in Parnell Square uphold the Constitution and Rules of Sinn Féin and pending the re-convening by it of an Ard-Fheis are the lawful governing body of the organisation.

Other news highlighted is the formation of a North West Regional Executive with the Secretary of that body being Daithí O Conaill. There is a reprint of an editorial from the Leinster Express, Port Laoise which speaks of a Sinn Féin Revival. This speaks of the walk out at the Ard-Fheis and how evidence of ‘infiltration by Communist elements was well documented in the statement [issued by the group which walked out]’.

Cumann na hUaimhe, Sinn Féin is reported as recognising the Provisional Army Council as the lawful leadership of the Republican Movement and stating:

We do not serve Queen, Kremlin or Free State, but will strive for a 32-County Republic based on the Proclamation of Easter Week and Christian principles.

Elsewhere it is reported that the South Galway Comhairle Ceantair held an AGM at which Ruairí O Brádaigh read a comprehensive statement from the Caretake Executive of SF giving five major reasons for the walk-out from the Ard-Fheis.

1) Recognition fo Westminster, Stormont and Leinster House. 2) Extreme Socialism leading to dictatorship. 3) Internal methods being used in the Movement. 4) Failure to give maximum possible defence in Belfast and other Northern centres last August. 5) Campaigning to retain Stormont instead of seeking its abolition.

An outline on the last page offers ‘Our Aims and Methods’ and includes the ambition of:

…[an] end to foreign rule in Ireland, to establish a 32-County Democratic Socialist Republic based on the Proclamation of 1916, to restore the Irishh language and culture to a position of strength, and to promote a social order badged on justice and Christian principles which will give everyone a just share of the nation’s wealth. These are objectives which have always had the support of the majority of our people, thought at times they may not have been expressed in precisely the same terms.

The piece continues by offering a history since partition, and includes a somewhat sympathetic overview of the Civil Rights struggle. 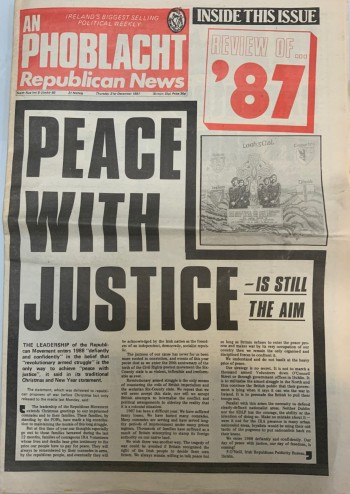