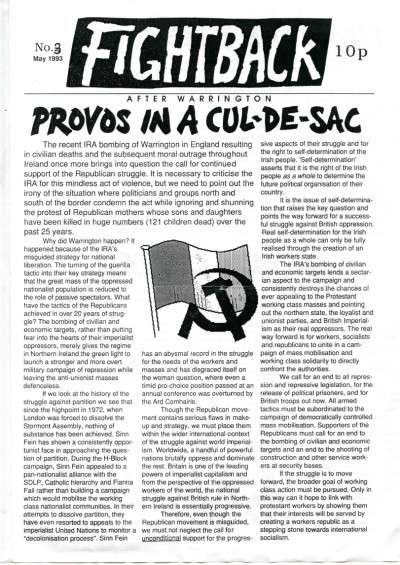 Many thanks to IEL for forwarding this document from the Irish Workers Group to the Archive. A brief four pages it engages with a broad range of issues. The cover suggests that ‘After Warrington: Provos in a cul-de-sac’.

The recent IRA bombing of Warrington in England resulting in civilian deaths and the subsequent moral outrage throughout Ireland once more brings into question the call for continued support for the Republican struggle. It is necessary to criticise the IRA for this mindless act of violence, but we need to point out the irony of the situation where politicians and and groups north and south of the border condemn the act while ignoring and shunning the protest of Republican mothers whose sons and daughters have been killed in huge numbers (121 children dead) over the past 25 years.

Thought the Republican movement contains serious flaws in make-up and strategy, we must place them within the wider international context of the struggle against world imperialism. Worldwide a handful of powerful nations brutally oppress and dominate the rest. Britain is one of the leading powers of imperialist capitalism and from the perspective of the oppressed workers of the world, the national struggle against British rule in Northern Ireland is essentially progressive.

Therefore even though the Republican movement is misguided, we must not neglect the call for unconditional support for the progressive aspects of their struggle and for the right to self-determination of the Irish people.

It concludes by arguing that:

If the struggle is to move forward, the broader goal of working class action must be pursued. Only in this way can it hope to link with protestant workers by showing them that their interests will be served by creating a workers republic as a stepping stone towards international socialism.

There are other articles exhorting readers to ‘Fight the Dole Cuts!’ and one on ‘Canteen Chaos!’ in the canteen at UCG which notes a church on campus grounds but insufficient facilities for students.

Another piece examines the ‘origins of Gay and Lesbian oppression’ and suggests that ‘in this climate of growing moral reaction, the task for socialists in relation to the lesbian and gay question is to provide a communist perspective for liberation’. This is accompanied by an advert for a Workers Power pamphlet entitled ‘Lesbian & Gay Liberation: A Trotskyist Strategy’.

The last page has an article on Socialism and Black Liberation and Malcolm X which argues that:

Black separatism and nationalism, as we have seen, will not provide the answer [to Black liberation]. The only way to combat racism is for the masses of black workers and oppressed to forge links with their fellow-oppressed white workers for the defeat of capitalism.

Also noted on the last page is that the IWG ‘is a member of the League for a Revolutionary Communist International (LRCI)’. 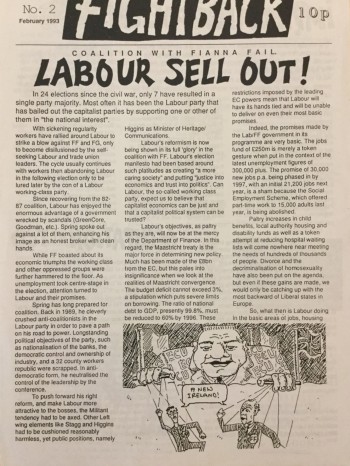 Fightback in the archive

Fightback was a students’ bulletin produced by Irish Workers’ Group students in Galway.…

See Fightback in the archive