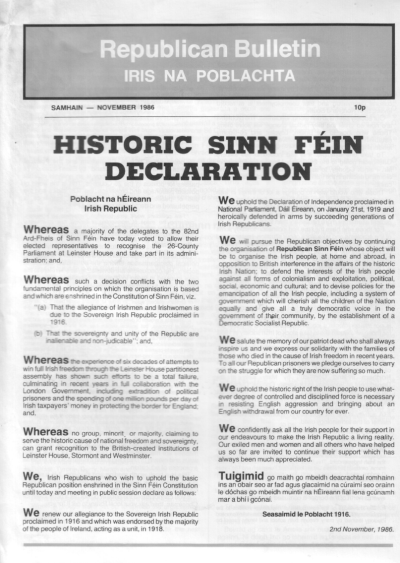 In some respects this is a foundational document of Republican Sinn Féin outlining their declaration that while the:

‘majority of delegates to the 82nd Ard-Fheis of Sinn Féin have today voted to allow their elected representatives to recognise the 26-County Parliament at Leinster House and take part in its administration: and,

Whereas such a decision conflicts with the two fundamental principles on which the organisation is based and which are enshrined in the Constitution of Sinn Féin, vis.

“(a) That the allegiance of Irishmen and Irishwomen is due to the Sovereign Irish Republic proclaimed in 1916. (b) That the sovereignty and unity of the Republic are inalienable and non-judicible’

We, Irish Republicans who wish to uphold the basic Republican position enshrined in the SInn Féin Constitution until today and meeting in public session declare as follows:

We renew our allegiance to the Sovereign Irish Republic proclaimed in 1916 and which was endorsed by the morality of the people of Ireland, acting as a unit, in 1918.

The document continues by offering ‘A Portrait of Ireland’, and notes that:

The Ireland of 1986 is best by many social problems. Most of us are aware of this. We know there is material and cultural deprivation and that unemployment is at record levels, both North and South.

Those who would wish to change a lot of things in Irish society cannot plan a way ahead without first taking a hard look and making a realistic assessment of how and where we are now and how we got here. Never was the need for a radical alternative more necessary than today.

It recommends and quotes from a number of documents including Ireland: A Sociological Profile from the IPA, and perhaps more surprisingly, a paper ‘Class, Clientelism and the Political Process in The Republican of Ireland; by Ellen Hazelkorn of DIT (who was associated with the WP during this period).

There is a short piece from an editorial in the Longford Leader on ‘A Man of Honour’ noting the recent SF split, and the foundation of RSF which includes:

Martin McGuinness and his friends who wanted to end the boycott of the Dáil tried to convince their colleagues that the new proposal was not a sell out on the principles of SF up to that point. It was of course a total sellout… but in their lust for power another sellout here or there means little to Gerry Adams and his cronies’.

And it contrasts that with what it regards as ‘the one man to emerge from the SF debacle with his honour intact was Ruairí Ó Brádaigh.

There are reports on Cumann na mBan’s unwillingness to support the removal of abstentionism, a progress report on the Organising Committee and a further account of the manner in which ‘those who wished to defend the Republican position moved with speed’ at the 82nd Ard-Fheis. It also notes expressions of support from various figures in the US, including Michael Flannery.

An important addition to the Archive. 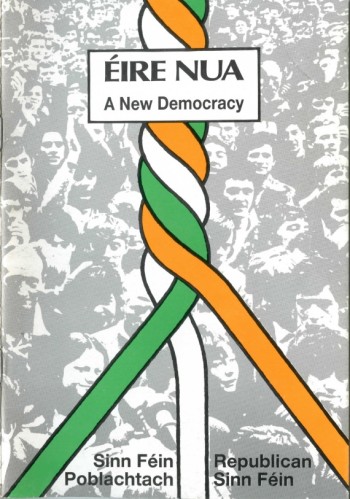 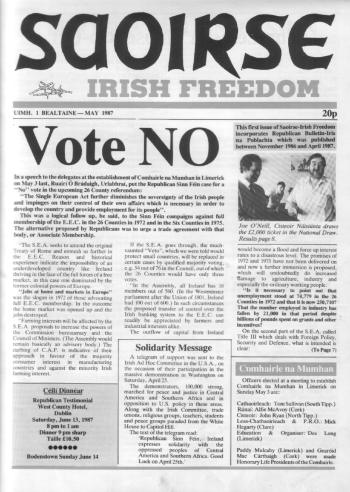 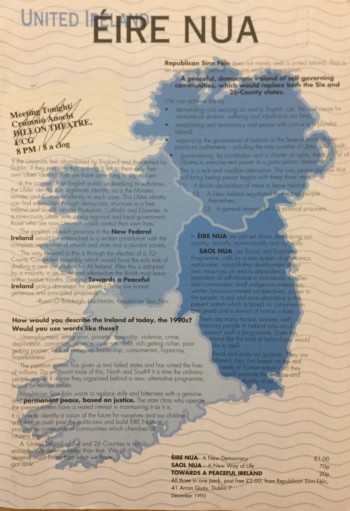 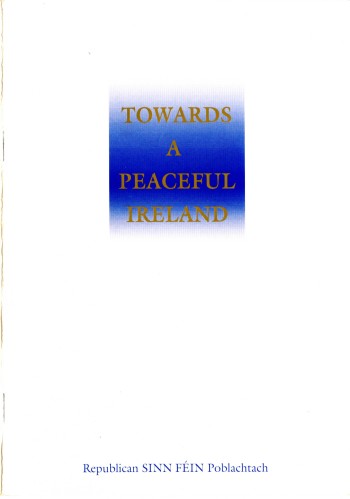 Republican Sinn Féin was founded following the 1986 split in Sinn Féin and in opposition to the decision by the latter party to end abstention from the Dáil. It was led initially by Ruairí Ó Brádaigh, who was party president until 2009.…

Republican Bulletin/Iris na Poblachta was published by Republican Sinn Féin between November 1986 and April 1987. It was then incorporated into Saoirse/Irish Freedom.…

See Republican Bulletin in the archive