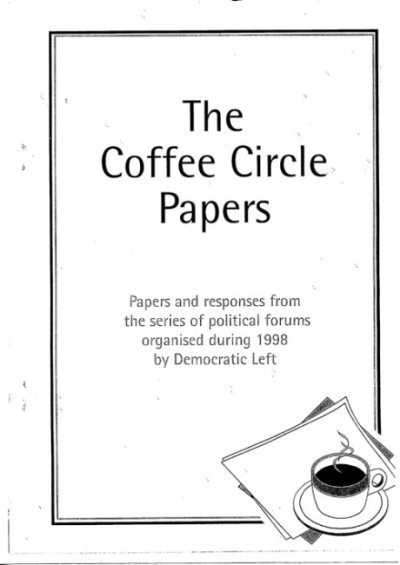 Many thanks to Catherine Murphy TD for donating this document to the Left Archive. As noted previously:

This document [published on foot of a series of meetings] is unusual in respect of the Irish left in that it sought to challenge fairly directly the assumptions held by a political formation. That formation, Democratic Left, less than a decade old had recently left government after Fianna Fáil had won the 1997 General Election. It had also shed two seats from its complement of six TDs.

Due to the length of this document it has been broken up into sections, and is being posted non-sequentially over the next year or so.

This chapter engages with the issue of Equality and Difference and is based on discussions held in Mao’s Café on International Women’s Day, 1988. There are two contributors, Kathleen Lynch of the Equality Studies Centre and a response by Orlagh O’Farrell, Lawyer and expert in equality law.

The summation is made by Deirdre O’Connell, a member of Democratic Left Women’s Committee.

The section includes two poems, one by Rita Ann Higgins and the other by Robin Morgan which were read by Ann Clune on the day of the discussions.

The papers are of considerable interest, the submission by Lynch particularly so as she offers an overview of the very term ‘Equality’. In it she argues strongly that distributive models of justice and equality are not sufficient, that it necessitates the inclusion of difference models. She also outlines concepts of ‘basic equality’, ‘liberal views of equality’, ‘focus on Juristic Forms of Equality’, ‘Women and Liberalism’ and the question as to whether ‘Radical Egalitarians have Answers?’. In this latter section she engages with various mechanisms for ‘realising equality of conditions’, many positioned in Marxism.

She concludes by suggesting that:

Equal rights of access and participation are crucial, but they may be meaningless when one finds one is allowed to participate or succeed only in lower paid ends of the labour market, or in the political work that more powerful people will not do. Hierarchies and patriarchies of wealth and power must be addressed to give substantive meaning to respect for difference’.

The response by Orlagh O’Farrell takes a different approach and focuses on two main areas. ‘The first one is that the response of men to women’s fight for equality needs to be looked at, as you really can’t get past a certain point in terms of arguing for equality without looking for a response from men. That point has now come’. Secondly she argues ‘we need to work on how to take account of the needs and situation of different groups of women. How can they be recognised and accommodated in the same political movement’. On the first she argues for a ‘kind of transition to power sharing between women and men’. For the second she argues that ‘I don’t see why specific policies cannot be designed within the broad umbrella – for unemployed women, for women in rural areas, for disabled women, for women travellers, lesbian women, for migrant women and for older women’. And she continues that ‘as a passport to economic independence for women, work is the key and work, I mean work in the formal economy, as been improving over the last number of years. It is no secret that many of these new jobs are precarious low-paid jobs.’

The summary of the discussion by Deirdre O’Connell briefly attempts to synthesise the thoughts of both contributors and notes that:

Other issues discussed were the mainstreaming of rights issues. Media major institution of ideology. Political resonance of language and other general issues of the question of democracy and equality. Relative advantage was also mentioned, to date liberal policies have advantaged the advantaged e.g. in relation to public transport. 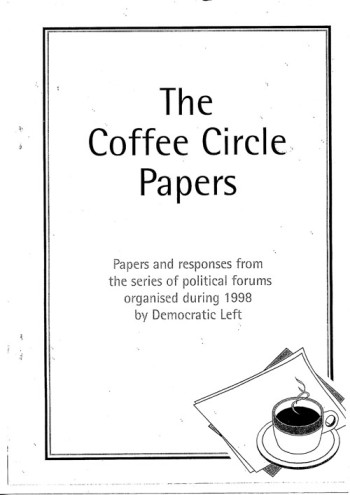