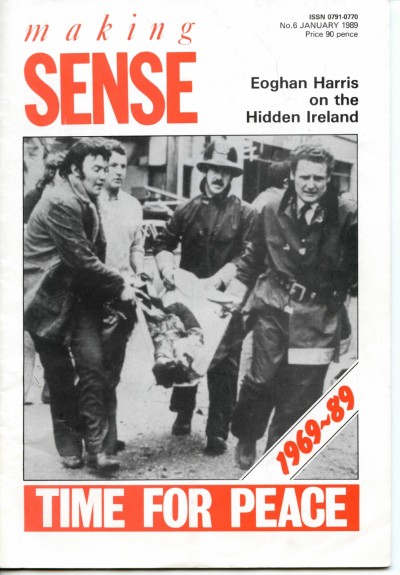 An interesting issue of the Workers’ Party magazine, Making Sense, from 1989. It has a broad range of articles, from Eamon Gilmore ‘arguing that socialists need to wake up to the realities of Ireland today’, Rosheen Callender examining labour markets, an interview with Alexander Cockburn, Lorraine Kennedy looking at the ‘myth of Mother Ireland’ and Eoghan Harris looking at the influence of Daniel Corkery ‘on the formation of modern bourgeois nationalist intellectuals’.

The cover article ‘Making Peace in Ireland: The responsibility of the Republic’ is by Seamus Murphy of the Jesuit Centre for Faith and Justice, and offers this potted outline of the history of the conflict on the island.

It is almost twenty years since the British government sent troops to Northern Ireland in the midst of serious civil disturbances. Two years later, the Provisional IRA came into being and launched a vicious campaign of violence against the Protestant population. Loyalists elements responded in kind, and politics gave way to terrorism. Efforts to find a political solution have the far failed, and the killings continue.

Murphy argues that ‘much southern confusion arises form subconscious guilt about the north’. And he continues that ‘the typical southerner… while… abhorring the appalling violence of the IRA and generally supporting the Dublin governments attempts to suppress it… cannot quite bring himself to consciously stand wight he unionist population against IRA violence or express support for the security forces in NI’.

He suggests that ‘the Republic must not lend a sympathetic ear to everyone claiming to be a spokesperson for the oppressed minority in NI. it is perfectly obvious that the democratic parties representing northern Catholics (SDLP, Alliance, WP) are engaged in a serious struggle with a fascist, authoritarian, violent and anti-democratic party (SF/IRA).

It must be made clear that every vote for SF, far from bringing the day of Irish unity closer, actually makes it more distant; it needs to be spelled out that supporting the IRA creates, not just a gulf between the two communities in NI, but a second gulf between the northern minority and the south where SF has no electoral future.

precisely because the south has not suffered either at the hands of loyalist paramilitary violence or by security force excesses, it has less excuse for failing to reach out to the unionist community. If the southern community is to fulfil its moral responsibility of building peace, it must resist the temptation to give in to its own emotions and take sides, and instead work at the difficult task of being an honest broker for peace.

He then suggests that were the IRA to ‘achieve a united Ireland’ it is his suspicion that most in the south would abhor the means but accept the end, even if ‘it were built on the slaughter and expulsion of thousands of the Protestant community’. From this he argues that ‘What might in the long run make a difference would be a repudiation of its goal as well as its method; if the southern community is not to be complicit in the IRA campaign, it must build a wide consensus around the position that a united Ireland attained the IRA way could never be acceptable.

Meanwhile the editorial looks at the issue of ‘fighting poverty’ and argues that:

The voice of the poor was heard to great effect in 1798, and helped give birth to democracy. It would be a fitting celebration of the French Revolution if that voice was raised in Ireland to insist that the principles of Liberty, Equality, and Fraternity were accorded more than lip service. 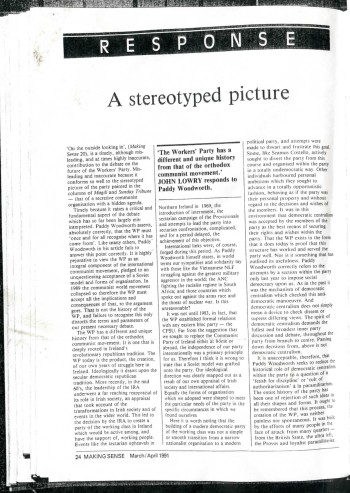