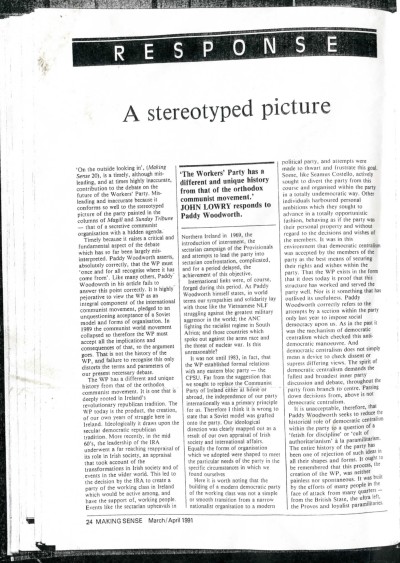 This is an excerpt from the March/April 1991 edition of Making Sense from the Workers Party. It constitutes part of an exchange between Paddy Woodworth and John Lowry of the WP – following on from an article Woodworth wrote in the previous edition, Making Sense No.20.

In this one Lowry argues that Woodworth’s piece was ‘timely, although misleading, and at times highly inaccurate contribution to the debate on the future of the WP’. And he suggests that this was misleading because it conformed to ‘the stereotyped picture of the party painted in the columns of Magill and the Sunday Tribune – that of a secretive communist organisation with a hidden agenda’.

Lowry continues that ‘it is highly pejorative to view the WP as an integral component fo the international communist movement, pledged to an unquestioning acceptance of a Soviet model and forms of organisation. In 1989 the communist world movement collapsed so therefore the WP must accept all the implications and consequences of that, so the argument goes. That is not the history of the WP, and failure to recognise this only distorts the terms and parameters of our present necessary debate.

The WP has a different and unique history from that of the orthodox communist movement. It is one that is deeply rooted in Ireland’s revolutionary republican tradition.

And he argues that after reappraisal in the 1960s there was a decision ‘by the IRA to create a party of the working class in Ireland’. He notes that international links were forged but that ‘it was not until 1983, in fact, that the WP established formal relations with any eastern bloc party – the CPSU’. He defends democratic centralism (in part arguing that Seamus Costello sought to ‘divert the party away from its course’ and that democratic centralism ‘was accepted by the members of the party as the best means of securing their rights and wishes’).

He further takes Woodworth to task for finding fault in WP condemnations about the Provisional IRA and Provisional Sinn Féin, suggesting this is ‘exactly the return with which we have become so familiar from sections fo the so-called Irish left and FF, who can barely hide their ambivalence boards the Provo’.

He suggests that ‘the WP never had nor has any intention of hiding or denying its past’ and ‘it has only been the consistent and unflinching WP condemnations of the Provos which have exposed the true nature of the beast when all around us others were attempting to make excuses for them’.

He argues that the WP is ‘a modern democratic socialist party’ and ‘the idea that we are a communist party in the Soviet mould is a mistaken one’.

If anyone has the full edition and would be prepared to forward it for scanning we would be very grateful.