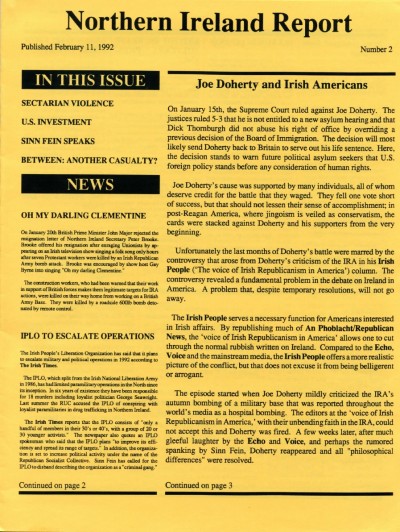 Many thanks to those who donated issues of Northern Ireland Report to the Archive. These will be appearing in the months ahead.

This is a particularly unusual addition to the Archive. Northern Ireland Report was published by an ad hoc group of individuals in the United States who while close to Sinn Féin were critical of it, and particularly so during the developing Peace Process. Their position would have been strongly left of centre. One aspect of their goal was to produce a publication which was different from the more conservative leaning publications issued in the US which were sympathetic to Irish republicanism.

The magazine ran for 25 issues, finally ending publication in May 1996.

“NIR is an independent publication and is not affiliated with any political party, group or organisation in Northern Ireland or the United States. “

This second issue has a wide range of articles in eight short pages. These include news about the then extradition of Joe Doherty in the United States and it is worth quoting extensively from that piece in order to give a sense as to the political orientation of the newsletter. This makes mention of the fact that Doherty had an Irish People [“The voice of Irish Republicanism in America”, as the article notes] column.

And it notes that his ‘battle was marred by the controversy that arose from his criticism of the IRA in the Irish People’.

“This controversy revealed a fundamental problem in the debate on Ireland in America. A problem that, despite temporary resolutions, will not go away.

The Irish People serves a necessary function for Americans interested in Irish affairs. By republishing much of An Phoblacht/Republican News, the [IP] allows one to cut throughout he normal rubbish written on Ireland. Compared to the Echo, Voice and mainstream mead, the IP offers a more realistic picture of the conflict, but that does not excuse it from being belligerent or arrogant.

The episode started when Joe Doherty mildly criticised the IRA’s autumn bombing of a military base that was reported throughout the world’s media as a hospital bombing. The editors at the ‘voice of Irish Republicanism in America,’ with their unbending faith in the IRA, could not accept this and Dohertty was fired.

A few weeks later, after much gleeful laughter by the Echo and Voice, and perhaps the rumoured spanking by Sinn Féin, Doherty reappeared and all ‘philosophical differences’ were resolved. “

“What were these ‘philosophical differences’? Why can’t the Irish People admit what everyone else knows? Joe Doherty, a former member of the IRA, serving time in jail because of that membership, was fired because he criticized IRA tactics to the displeasure of a bunch of Americans playing revolution three thousand miles aaay from the war. “

“This is the fundamental problem that inhibits other American groups and organisations from sympathising and promoting Irish Republicanism. Irish Americans, or any Americans who organise around Irish issues, have yet to develop any real movements that can sustain dialogue, debate and analysis. Irish-American activists have suffered from intellectual paranoia, associating any criticism of the IRA as a form of treachery. “

It notes that in Ireland ‘where censorship and oppression are very real, within the Republican movement there is much debate’. And it suggests:

“This is not to condemn the Irish People, but to suggest that if the Irish conflict is going to be taken seriously by the left, a group that can honesty rally around it in a common cause, then publications like the Irish People must drop this zealous, and sometimes embarrassing, commitment to every IRA action. “

“It is time for Irish-Americans to transcend their simple support for the IRA, and being to support the ideals of Irish Republicanism, such as socialism and anti-imperialism, in their own country as well as in Ireland. As Joe Doherty is deported, we all must remember his most important contribution, highlighting the extent of U.S. injustice.”

Other pieces consider topics such as ‘IRA bombs in London’, ‘British Increase Military Presence’, one entitled ‘Britain is to Blame’ on sectarian violence in the north of Ireland and a long article by Bill Rolsten and Mike Tomlinson on U.S. Investment in the North of Ireland. It also has an interview tin Richard McCauley, ‘Sinn Féin’s Director of Publicity for the Six Counties’. This last is of particular interest for some of his comments about socialism, anti-imperialism and so on. 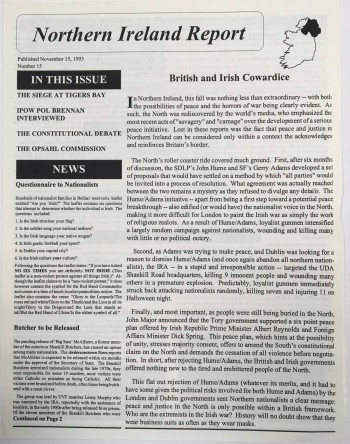 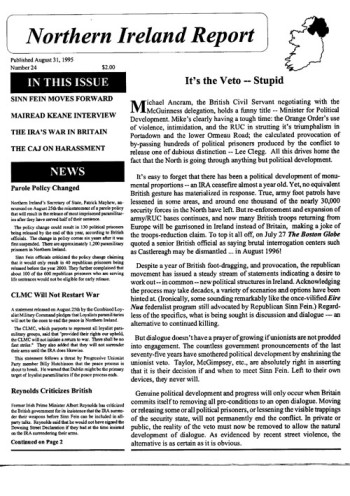 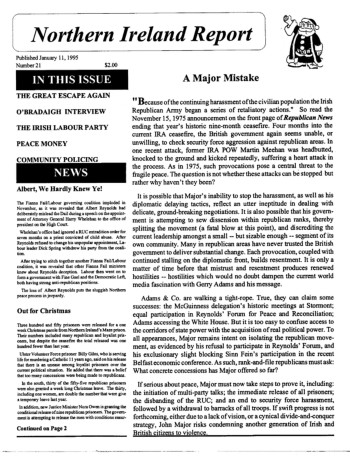 Northern Ireland Report in the archive

Northern Ireland Report was published by an ad hoc group of individuals in the United States who, while close to Sinn Féin, were critical of it, and particularly so during the developing Peace Process. Their position would have been strongly left of centre. One aspect of their goal was to produce a …