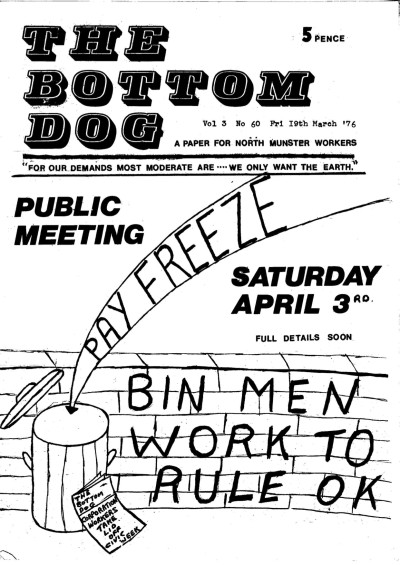 This edition of the Bottom Dog from March 1976 continues the sequence of that publication that we have been posting over the past few years, building into a good snapshot of left activity in Munster during that period.

This edition leads with news of a Public Meeting on ‘Bin Men Work to Rule’. It notes that the Limerick Civic Week has been derailed by…

…the Corporation go-slow. The workers involved (the dustmen, street cleaners, etc) by their actions are giving the impression to outsiders that Limerick is an untidy city. This is bad for the trade and profits of those sections who hope that Civic Week will attract free spending tourists here. Listening to some politicians in the town you would get the idea that the present go-slow is a deep laid fiendish plot to mess up Civic Week. Is there any truth in the rumour? Is the dignity of ancient Luimneach being held to ransom by the bin men?

And the Bottom Dog answers that by noting that it went to the secretary of the Corporation Section of the ITGWU. It notes that a productivity deal was being discussed in the previous year, that £4 was put on the table. Workers representatives left to bring this to their membership. But before they could return the Minister of Local Government, Jim Tully put an embargo on special wage increases. The workers felt that since the offer predated the embargo it should still stand.

Subsequently there was no communication from the Minister despite repeated efforts on the part of workers. And as the TBD notes:

The patience of the Limerick Corporation employees is bound to wear a bit thin after all this carry-on. No one appears to take a blind bit of notice of them so they have correctly decided to take their industrial action to add muscle to their arguments. Instead of an all out strike for the moment the lads hope to persuade the Minister to change his mind with the aid of a go-slow.

Government policy is to push for a pay freeze for all the working class regardless of whether they are in the public or private sectors. If the men in the Corporation defeat Mr. Tully’s embargo, it will make that much more difficult to impose a freeze. Their struggle is not purely a sectional struggle but is part of the fight by workers against pay freezes and against government interference.

There are other articles of considerable interest including one on contraceptive availability which with reasonable prescience notes that ‘it is only a matter of time now until Contraception is a fact of life in Ireland’. This piece is reprinted from Banshee, ‘journal of Irishwomen United’. There is along article against the then Pay Pause, another on a union recognition dispute in Shannon and one on a picket by a Right to Work Committee on a Construction of Industry Federation dinner at the Parkway Motel due to the attendance of ITGWU and builders union officials. There’s also a piece on the Spanish Civil War and another on an urban district councillor and his ‘public attacks on itinerants’.

More from The Bottom Dog 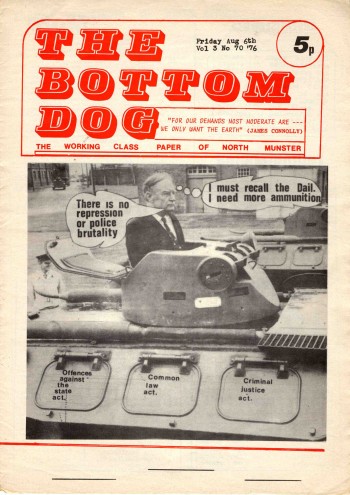 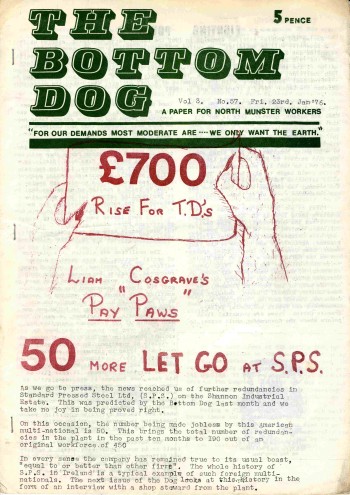 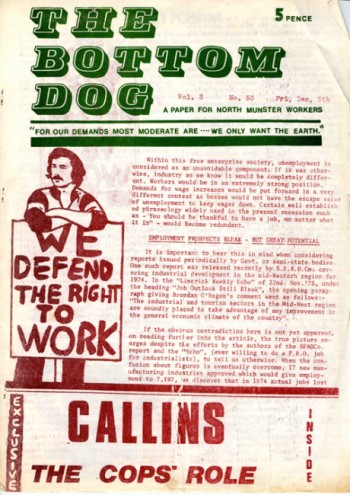 The Bottom Dog in the archive

The Bottom Dog was a Limerick-based newspaper, published from 1975 and subtitled “the working class paper of North Munster”.…

See The Bottom Dog in the archive