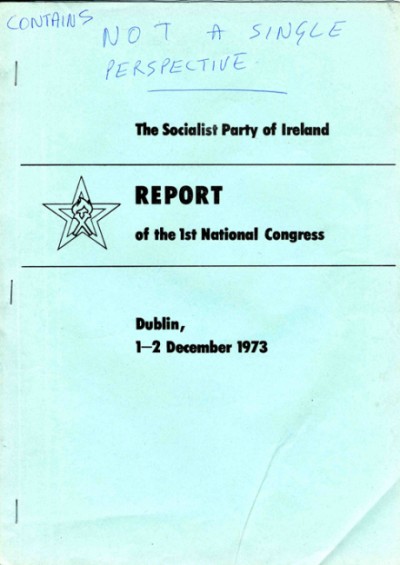 As a means of opening the discussion on the SPI the accompanying document was donated by Mark P (for which many thanks and many thanks also to the SP for allowing us access to some documents from their archive) and seems entirely suitable for the Open History Project. It provides a report by the Socialist Party of Ireland (not related to the contemporary Socialist Party) on their 1973 National Congress.

The SPI was a split from Official Sinn Féin which took place in 1971 with a small cadre believing that the larger group was overly exercised by the national question and insufficiently Marxist-Leninist. The SPI never achieved national prominence, but in adopting some positions not dissimilar to BICO (and working with BICO) it foreshadowed developments in the WP later in the day (and some of its members returned to OSF and later the WP). But the party ultimately merged in 1982 with some from BICO and Jim Kemmy’s Limerick group as the Democratic Socialist Party.

The Lost Revolution gives an overview of the genesis of the party as follows:

Internal unease at the perceived primacy of nationalist politics over social agitation resulted in several Dublin activists resigning from Sinn Féin in the aftermath of the 1971 Ard Fheis. Among those who left to set up the Socialist Party of Ireland (SPI) were former leading figures in the Dublin Housing Action Committee. most were also OIRA members who had already left following disputes over the movement’s political direction that surrounded the 1970 IRA General Army Convention. In order to help fund the new party, SPI supporters robbed £1,000 from a post office in Ballymun. Despite some allegations of intimidation, relations between SPI members and their former comrades remained relatively good, with several rejoining Sinn Féin within a few months. The new group would eventually adopt a view on the ‘national question’ strongly influenced by the British and Irish Communist Organisation’s ‘two-nations’ theory. It was openly pro-Soviet and unashamedly adopted Communist iconography. But outside of Ballymun, where it campaigned consistently on local issues, the SPI failed to make a discernable impact and never numbered much more than a few dozen activists.

The Lost Revolution doesn’t expand on the dispute at the Army Convention and that is a matter which would be worth exploring further.

The Socialist Party of Ireland (SPI) (Cumann Sóisialachais na Éireann in Irish) was a minor left-wing political party which existed in Ireland from 1971 to 1980. The SPI was set up by ex-members of “official” Sinn Féin. It was formed on 13 December 1971 in Dublin and published its political manifesto on 19 January 1972. The SPI saw itself as a hard-line Marxist-Leninist alternative to the Communist Party of Ireland, which it criticised for its “blurred philosophy, loose structure, of discipline and unity”. The SPI opposed the friendly stance taken by the CPI towards official Sinn Féin, which it saw as a “mixture of petit-bourgeois radicals, nationalists and ultra leftists”. The SPI supported the Communist Party of the Soviet Union and the Moscow Declaration of 1969. It staged its first national congress in Dublin on 1–2 December 1973. The congress elected a seven member central committee comprising of Fergus Brogan, Desmond Hughes, Deirdre Uí Bhrógáin, Éamonn Ó Fearghail, Seamus Ó Reachtagáin, Fergus Quinlan, and Séamas Ó Brógáin. In the late 1970s, the party started discussions with several other groups with a similar policy on the National Question, including the British and Irish Communist Organisation (B&ICO) and the Limerick Socialists headed by Jim Kemmy. Eventually the three groups merged forming the Democratic Socialist Party (DSP) with one elected representative in the Dáil (Parliament). The DSP eventually merged with the Irish Labour Party which became a junior partner in a coalition government. During its life, the SPI was very active in campaigning for divorce (Divorce Action Group), contraception (Contraception Action Campaign), abortion (Right to Choose) and, in particular, opposition to nationalism and the campaign of the Provisional IRA (Socialists Against Nationalism). It supported the Two States Theory which accepted the right of the Unionist population of Northern Ireland to remain part of the United Kingdom until such time as a majority of the population choose otherwise by democratic means. The party’s head office was at 23 Parliament Street, Dublin 2. In 1976, it renamed itself the “Socialist Party”. Several SPI members ran as independents in Irish elections, the most successful being Eamonn O’Brien[1] from Ballymun, whose performance in achieving over six percent of the vote in the Dublin County North constituency in the 1977 General Election[2], encouraged Official Sinn Féin on the parliamentary road. He also joined the Workers Party and later the Labour Party and represented ballymun as a city councilor. The party’s publications, Vanguard and Advance, set a new standard for left-wing publications, using modern layout and photographs in a high quality reproduction format. On 1 December 1982, the Socialist Party dissolved itself into the Democratic Socialist Party.

That concentration on an activist approach to issues such as divorce and contraception is also of great interest for it foreshadowed a shift towards such issues by the left more generally during the 1980s. Clearly whoever wrote that had access to the Report of the 1st National Congress.

The Report itself neatly lays out the SPI line on a matter of topics, particularly in the opening speech from the Congress. Of considerable concern was the EEC, joined that year, the FG/Labour coalition, ‘preparations’ for a move away from neutrality, national wage agreements. This is couched in a language of direct confrontation with the state and the ‘treachery’ of the trade union movement.

On the North the party was clear that only by ‘bringing to the fore […] class issues’ could the situation be resolved and that it was certain ‘that campaigns of bombing and counter-bombing, murder and assassinations, produce only negative results which serve the interests of imperialism’.

On international relations the party welcomed ‘the constructive foreign policy of the Soviet Union [which] has made the greatest contribution to the establishment of an enduring peace based on mutual respect for sovereignty of states and non-interference by states in each other’s internal affairs. The Soviet/Federal Republic of Germany treaty has ended the cold war. The Soviet-American agreements make peaceful co-existence between the two great powers into a principle of state law’. It also lamented the overthrow of Allende in Chile.

One notable feature is the emphasis on party discipline. While this concept of ‘discipline’ isn’t enunciated entirely in full but is reiterated as a defining aspect of the party it is clear that it is bound up with an internal party structure which utilises democratic centralism and is posited as a distinction between them and Sinn Féin and indeed their perceived greatest rival on the left, for the Central Committee Report makes note of the following:

We must refer to the existence of the organisation called the ‘Communist Party of Ireland’, because it is as a direct consequence of its failure that two parties exist claiming revolutionary leadership of the Irish working class.

The most obvious fault of the CPI – and the one which ensures that it will never gain mass support – is its capitulation, ideologically and organisationally, to Sinn Féin. The ‘official’ Sinn Féin organisation, with which the CPI is in permanent alliance is an unstable mixture of petty-bourgeois radicals, nationalists, and ultraleftists…

We must make it clear that our difference with the CPI is not just on their attitude to the national question. The truth is that the CPI lacks not just one but many – one might almost say all – of the characteristics of a communist party: and the logical and inevitable result of its vague philosophy, its loose structure and its lack of discipline and unity is its imminent collapse into opposing factions, which points to the absolute necessity for a new organisation.

This sense of distinctiveness permeates the document. But it’s also fair to point to the admission that:

And yet, a most intriguing one at that whose influence on certain aspects of Irish political life may have been greater than their numbers. It’s hard at this remove to understand the trajectory of their development from more orthodox than the CPI to the DSP. More information gratefully accepted.

Addendum by WBS: I knew quite a few people in the WP who had been through the SPI, indeed the first time I heard about the SPI was probably in 84 in the party club having a pint at a table up against the street side surrounded by old-timers who looking back were probably barely out of their twenties but at the time seemed like wisdom incarnate. There was no question that even though they’d left and the party had disbanded at that stage they still had good memories of it, almost as if it were a rite of passage. Worth drawing attention to the annotations in the text of the document above by a later, rather more critical reader. 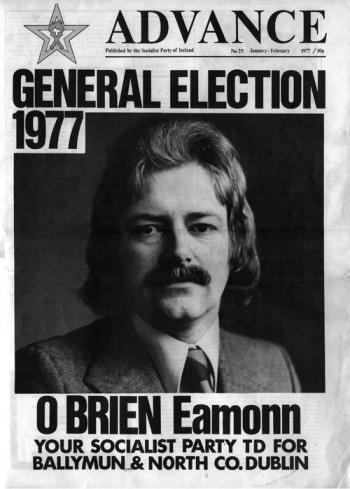 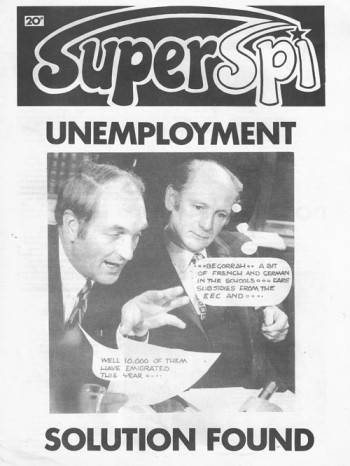 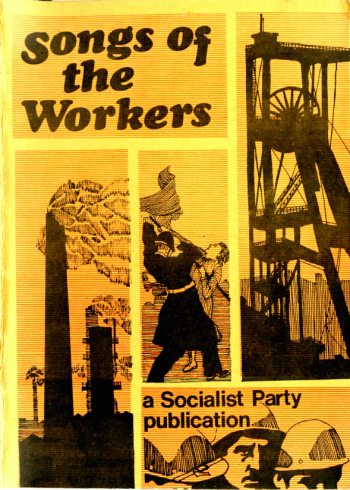 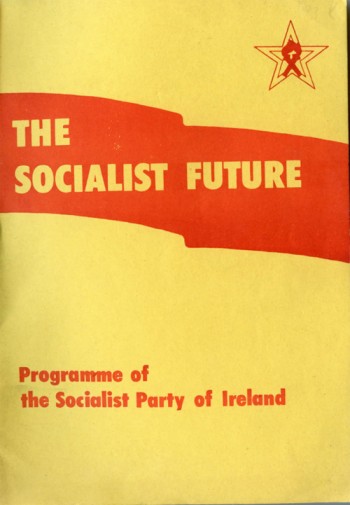