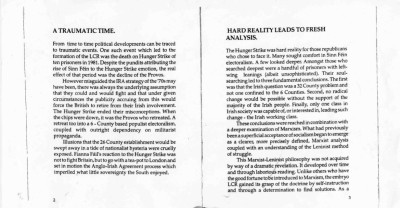 Here’s a document - which may well be “From Long Kesh to a Socialist Ireland” (unfortunately it isn’t complete - lacking both a cover and back page(s) ) issued by the League of Communist Republicans in or around 1988. The LCR was an interesting group, a split from the Provisional IRA in the 1980s. For a detailed history of the LCR Fourthwrite has a piece by Liam O’Ruairc on it.

The basic overview, largely drawn from the Fourthwrite article (available here  as a pdf), is as follows.

With the end of abstention by Sinn Féin at the 1986 Ard Fhéis there was a mass resignation of about 100 IRA prisoners in Long Kesh. Of this number a smaller group combined in November 1986 as the League of Communist Republicans. Their position was interesting since they argued that the armed campaign was of limited use at that point in time (and who better to know?) and that Sinn Féin was retreating from the left.

One of those pivotal to the LCR was Tommy McKearney who developed their programme (reproduced, not quite in full due to missing pages, in the last pages of the PDF above):

WE STAND FOR: 1. An independent Sovereign Republic of All Ireland. 2. A Revolutionary Democratic Government, under the control of the Workers and the Small Farmers. 3. Administration of the State to be under the supervision of a National Assembly which practices Direct Participatory Democracy, ie deputies are subject to recall. THE STATE MUST GUARANTEE ITS CITIZENS: • Work at an acceptable wage. • A home suitable to the citizen’s needs. • An education to the highest level compatible with the citizen’s ability. • Full and comprehensive healthcare. • Social Rights including: Divorce Contraception and abortion Separation of Church and State Meaningful equality between the sexes. To allow the Workers’ and Small Farmers’ State exercise control, it is imperative that the commanding heights of the economy, Finance, Trade, Industry, Production and Communication, be brought under the Democratic control of the Revolutionary Democratic Workers’ and Small Farmers’ Republic.

As can be seen this had deliberate resonances with the 1934 Republican Congress. Their slogan ‘A Workers’ and Small Farmers’ State’ was an attempt to remedy what they saw as the original error by Ryan and others at that Congress. And as a further echo of this their journal was named Congress ‘86.

Unlike the later split with the 32-County Sovereignty Movement, the LCR split was not well publicised. Apart from some obscure journals of tiny Marxist organisations, the media didn’t pay any attention to the formation of the League of Communist Republicans. That might have been justified if one thought that the LCR was just a tiny group without influence outside the prisons. However, looking back fifteen years later, the formation of the LCR is a fact of far greater significance. What is significant is that a group of Republican prisoners thought that it was impossible to reform the Republican movement from within, and that it was necessary to break away from it and form a new organisation. In 1986, many of the prisoners (and we are not even talking here of people outside the jails) who were for one reason or another critical of the direction Adams was taking the organisation in, believed that it was still possible to change the Provisional Republican movement from within. “The course of time has fallen on the side of those who argued that there was no internal means of changing the Republican Movement.

And there is much in that analysis. However, it also points to the paradoxical marginalisation of the armed struggle and those at the hard end by political processes outside the prisons which were encompassing much greater numbers. Without a party organisation to organise around, and the LCR was not a party, it was difficult if not near impossible to mobilise. Where the LCR did attempt to do so it was constrained by it’s larger rival.

A couple of oddities about the LCR can be pointed to. Their critique of the then campaign was quite pointed, and although not coming from a pacifist direction, it implicitly suggested that armed struggle was futile in the then existing conditions.

…for the LCR, “the limitations of legality have never really been tested. ” More significantly, the current campaign “does not enjoy broad, popular active support”. Although there is evidence for some mass participation and support (safe houses, duration of struggle, people on marches, etc.) the fact that seventy per cent of the nation is apathetic to the IRA campaign, there is effectively no mass participation. And thirdly, the IRA campaign (in the late 1980s) was stuck in a stalemate. For the LCR, the IRA campaign was not a people’s war like in Vietnam or Nicaragua, but was essentially a matter of “propaganda by the deed” more reminiscent of the individual acts of terrorism of anarchists.

Note the rhetoric about ‘people’s’ war. The LCR was moving in an odd direction as regards their motivations for splitting from the IRA. Because while they eschewed a parliamentary road to socialism they ‘agreed with tactical interventions’.

But in the Irish context, this could only be done in the South. “This means that the responsibility for making a tactical intervention in parliaments must be kept open. Reality dictates that this can only be done successfully in Leinster House. It is there that a pragmatic intervention stands the best chance of destabilising the establishment. No such option exists in Westminster. Under present circumstances, and for the foreseeable future, attendance at the British House of Commons would serve no purpose other than to validate the British imperial claim to sovereignty over Ireland.”

And added to this was an identification with the Soviet Union and the concept of a ‘vanguard’ party which would take a leading role in a reformulated Republican Congress/broad front strategy.

And yet, a further problem for the LCR was that they sought to mark out political territory that was already well covered. They had discussions with the CPI which in its Marxist orthodoxy was in some respects obviously complementary to their approach. The Workers’ Party, while jettisoning the nationalist element of Republicanism, were forging ahead politically in the South on a programme with not entirely dissimilar roots (indeed to me it is striking just how pronounced and similar the social liberalism of the LCR was as expressed in their programme). And yet they could not join one - in part due to the need to justify their previous positions, and clearly would not join the other for historical and ideological reasons (indeed a reference in the text to Sinn Féin in 1986 suggests that they (the Marxists of the LCR) should they remain within it ‘…at best could hope for a pale version of the Workers’ Party…’.

Any further material from the LCR would be very much appreciated.

11/09/2014: Note the Fourthwrite website is no longer active, but the article mentioned is available via the Internet Archive .

More from League of Communist Republicans 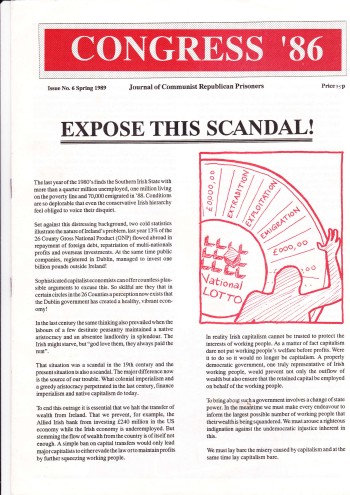 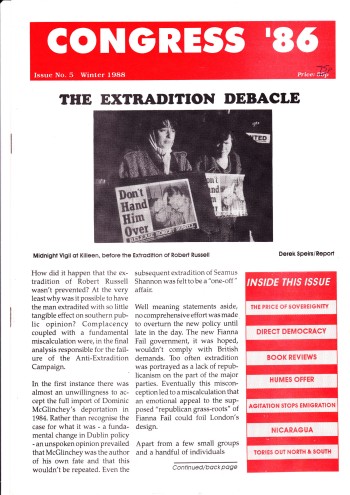 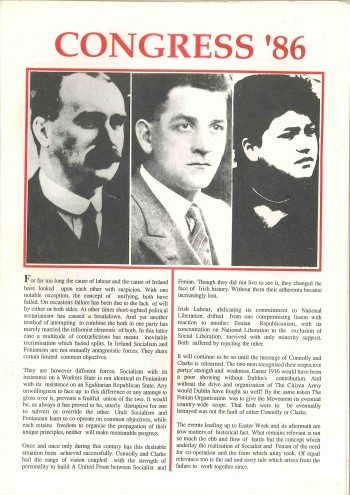 League of Communist Republicans in the archive