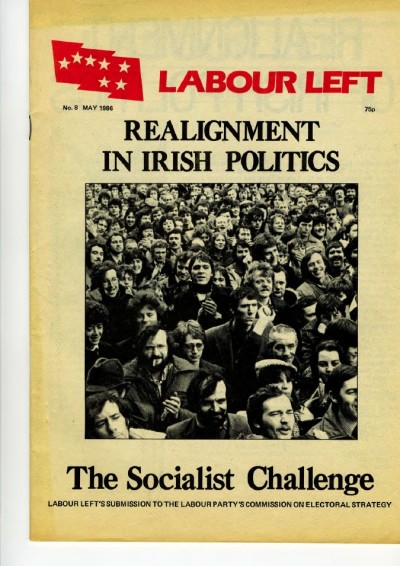 Many thanks to Michael Taft for this pamphlet.

This is the first document from the Labour Left, a key group within the Irish Labour Party in the 1980s and one which had considerable support within the party. It is important to note that Labour Left was distinct from Militant.

The Introduction, written by Frank Buckley, then Chairperson of Labour Left, notes that the Submission ‘is the culmination of nine months of work and widespread discussion among the broad Left of the Labour Party and constitutes a detailed, concrete strategy for all socialists and progressives to rally behind in order to create an independent, socialist Labour Party.

We have attempted to… elaborate general principles and provide illustrations, not so much as hard proposals, as examples of how the principle can be applied. This is especially the case in the areas of trade union and corporate links, political education, financing and public relations. In other areas we have put forward specific propositions around which the principle would be unfulfilled. This is the case in the areas of electoral strategy, party democracy, organisation and policy making. Taken together the submission aims to clearly put forward a Left critique and programme, one which can unite all sections of the LP and activists outside the Party.

The main contention of the submission is quite simple: by per suing an independent, socialist strategy that unequivocally champions a politics of working men and women Labour can, in a period of 15-20 years, be on the verge of precipitating a left/right divide in irish politics. This has long been the goal of progressives (and even conservatives). To realign political competition in Ireland must become the overriding objective of Labour and socialists. Unless this occurs, socialism will remain off the agenda.

It also states that:

[the Lps’ work in building a mass following] must be predicated on a political programme that actively seeks to unite all sections of the working class and progressive in a broad alternative alliance to he present conservative front of the two (now three) right wing parties. In this context, it becomes even more imperative that the Party constitute an Independent, democratic and campaigning organisation to bring about that unity and cohesion.

The contents of the magazine include pieces on the ‘Conservative Electoral Consensus’, ‘Realigning Irish Politics’, ‘Activating a Campaigning Party’ and ‘Democratising Socialism’. Interestingly there is little or no mention of rivals on the left. Also absent from discussion is the impact of Republicanism and the conflict on the island on left politics.

There’s a somewhat negative tone to the pieces. For example, ‘Conservative Electoral Consensus’ ends on the notes that ‘Many have rationalised Labour’s minority status: small industrial base, strong church influence, an irredentist conservative population. All these attempts to explain Labour’s failure have failed for that failure is, ultimately, Labour’s own.’

There’s also considerable emphasis on the ‘New Republic’ approach of the late 1960s, which is characterised as ‘a strategy of polarisation - no coalition, no minority support for either conservative party’. More contemporary events have a certain resonance in regard to this, ‘This strategy was directed specifically at FG which was considered redundant, a party of ‘ranchers and bankers’, a political dinosaur. Labour would overtake FG as the main political opposition. The conservative elements of FG would merge with FF transforming it into an amalgamated ‘Tory Party’. Irish politics would then polarise into Labour/FF divide.’

But as the article notes ‘Far from being redundant FG was beginning to renew its historical project by incorporating the liberal middle classes under the Just Society grouping. While this remained a fringe, it allowed FG to broaden out from its farmer base and set the foundations for its own ‘modernisation’ in the late 1970s.’

A second flaw in this strategy was the assumption that FF would easily be transformed form its populist broad class ‘national’ project with deep roots in the working class to a class based conservative party. This was a fundamental misreading of FF’s essence. Indeed the red smear campaign showed FF was more conscious of the vulnerability of its working class support than Labour.

More material from Labour Left has been donated to the Archive and will be posted over the coming months. 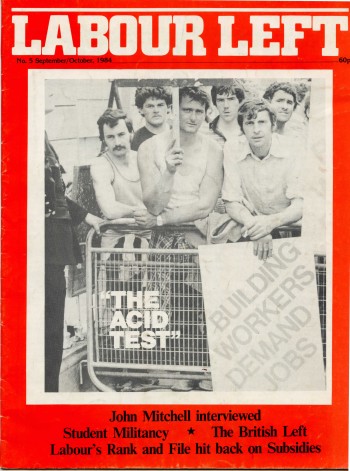 Labour Left in the archive