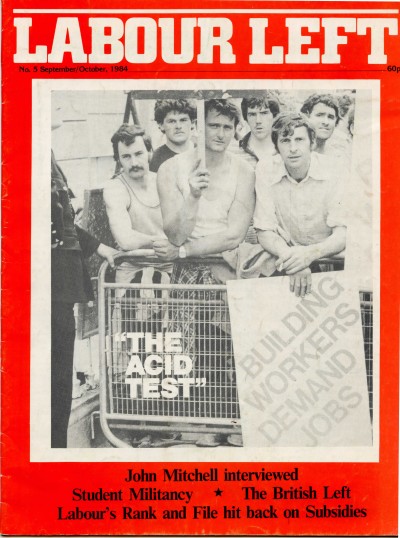 Many thanks to John Hedges for forwarding this document to the Archive.

Published in 1984 Labour Left had an editorial board composed of Tony Dermondy, Ciona Kernan, Peter McDermott and Michael Taft. The magazine notes that it is ‘produced by a cooperative of Labour Party members. Opinions expressed are not necessarily those of Labour Left’. Others involved on the Management Committee include Frank Buckley, Brendan Halligan and Sam Nolan.

It has pieces on the White Paper on Industrial Policy, Sean Redmond argues the paper represents ‘Ideological Capitulation’. There’s a piece by Joe Duffy which has the streamline ‘the rightward trend has been halted. Students remain an important progressive force in society’. John Mitchell, leader then of IDATU provides a scathing critique of the Labour Party. There’s consideration of the balance of forces inside the British Labour Party at the time and Bob Purdie has a piece on Labour and Ireland which ‘looks at the Atlee Government’s handling of Unionism’. There’s also a guest column from Mick O’Riordain of the CPI.

A quote from the introduction on a motion calling for a Special Conference of the party ‘in response to Labour’s disastrous showing in the European elections in which it lost all its four seats’ and argues that an ideological rift exists in the party, and the leadership refuses to admit there is a crisis. This also on foot of Labour’s entry to an FG-led coalition.

It argues that ‘Dick Spring and others are content to fill themselves that ours is a problem of marketing and organisation. In some areas the left constitutes the backbone of many successful organisational endeavours yet we still must pose the questions: market what? Organise to what end?’

It explicitly argues for a ‘non-coalitionist independent socialist position’ and a ‘socialist response to the present economic crisis’ as well as ‘strengthen of links with the Trade Unions’ and ‘we encourage all socialists to join the LP. We believe we can build a mass campaigning party from the grassroots up’.

Noting that the leadership ‘fends off criticism from the TU movement, the rank and file activists and its own elected membership’ and that ‘in government it justifies the cutting of essential services while real wealth remains intact’ it notes that ’its stated reasons for being in government are explicitly negative. First it seems they must restrain their friends in FG from unleashing the full force of their cruelty upon the ‘weaker sections’ of society. FG must be saved from themselves and a potentially vengeful electorate’. Secondly it must in the ‘national interest’ save the country from FF (thee effect here is relatively positive for the two major parties’.

The LP as never before lacks direction and meaningful purpose. The extent of demoralisation within the party cannot be exaggerated and with worse to come the undertaking of any serious organisational tasks will take place under impossible conditions. The calling of a Special Conference would at least signal a willingness to come to terms with the party’s crisis. 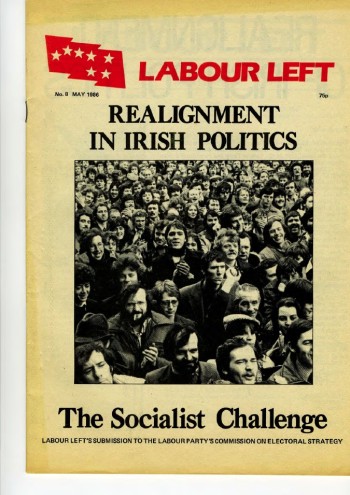 Labour Left in the archive

Labour Left was the eponymous magazine of the Labour Left group within the Irish Labour party.…

See Labour Left in the archive