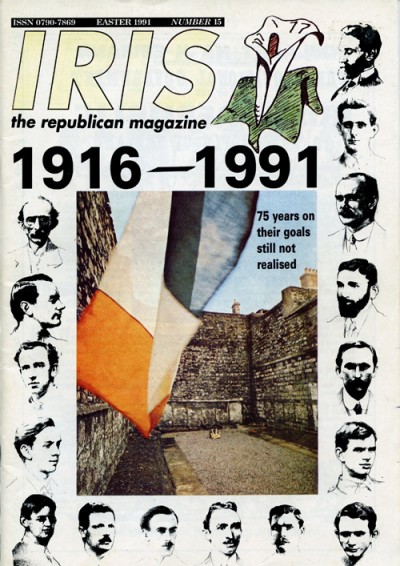 Many thanks to Jim Monaghan for donating this to the Archive. This is an addition to the other copy of Iris published by Sinn Féin that is in the Archive. And being the Easter 1991 edition it commemorates the 75 years from 1916 to 1991. As such it contains a broad range of articles on 1916, and - as interestingly - the years subsequent to that date.

The introductory Viewpoint contextualises the issue.

Our celebrations are inevitably tinged with regret, however, that the programme of those revolutionaries, enshrined in the Proclamation, has yet to be implemented. We also regret the reality that nationalist Ireland as a whole will not be commemorating this anniversary and that the revolutionary successors of 1916 are themselves a despised and slandered minority.

And it stresses the radical nature of the conflict.

The Proclamation was a radical document in the Ireland of 75 years ago and it remains so to this day. It was considered subversive then and is considered equally subversive today. Yet the demands it makes are for basic national and human rights. Failure to active these demands has resulted in tragedy for all the people of this island.

Which it then seeks to place within a then contemporary context.

Small wonder that its establishment [in the RoI] prefers to ignore the message of freedom and equality of the Easter Rebellion, given their continued subservience to Britain and we see a society where more and more people are forced to exist on meagre welfare payments while others accumulate massive wealth. Lip service is paid to the notion of equality but nothing is done to bridge the widening gap between rich and poor.

The approach to Unionism is interesting.

For the unionist population of the Six Counties, partition and the denial of Irish self-determination mean that they have been locked into the carnival of reaction that James Connolly warned of. They continue to allow Britain to divide them from their fellow countrymen and women, and remain trapped in a paranoid and reactionary statelet, suspicious of both their British masters and hostile to their nationalist neighbours.

And there are notes of pessimism and optimism.

At times this task seems hopeless, but a week is a long time in politics. The Berlin Wall has gone and Britain’s border in Ireland will go also. But there is much groundwork to be done first, particularly in the 26 Counties, if the present climate of opinion is to change.

Other articles include ‘A Pictorial View of 1916’, ‘1916 - What did it mean for Irish women?’ and ‘The radical years - The Labour Movement and 1916’. Also it has ‘The Betrayal of 1916 - Revisionism exposed’. Indeed the emphasis is markedly on the left aspects of the 1916, including an article by Mitchel McLaughlin on ‘The 1916 Proclamation - A revolutionary document’.

Also in the magazine is the Armed Struggle section with a piece on ‘sustained guerrilla campaign’ and ‘War News’.

Iris in the archive

See Iris in the archive