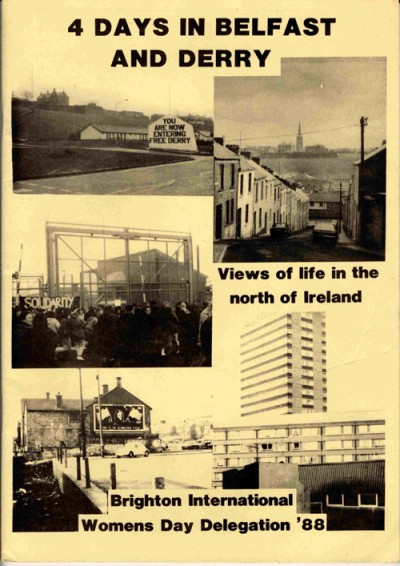 This is a document produced by the Brighton Women and Ireland Group and donated by Joe Mooney, for which many thanks. It details a visit by the Brighton International Womens Day Delegation in 1988 to Northern Ireland. The BWIG although not a political party had an avowedly political stance, as noted in the explanatory page at the end of this document where it states:

The BWIG has been going since 1983. Our aim is to get people interested in what is happening in the North of Ireland to to win support for the struggle of the Irish people against British domination. We believe that there should be an end to the British military presence in the six counties of Northern Ireland and we support the Republican struggle for a united socialist Ireland free from British control.

It also notes the work that the BWIG undertook to further these aims including participation in International Women’s Day delegations to Northern Ireland each year, running educational courses, speaking to local groups and political action. As regards the latter they given the example of how following the killings of three IRA members in Gibralter by the SAS they staged pickets and vigils outside an army recruiting office.

The women from Brighton came form a variety of backgrounds, including a woman who has been active in the peace movement for 30 years, Labour Party members, a NALGO member, a writer, and activists in the Palestine Solidarity Campaign, Brighton Lesbian Action, 2 women from Deal also joined the Brighton group - a member of Women against pit closures who was very involved in the miners’ strike, and a member of the National Union of Seafarers which is presently on strike.

An overview of ‘Derry: The Last 20 Years’ on page 14 is accompanied by the frank admission that:

1988 is the 20th anniversary of the first ‘Civil Rights’ march in Derry, and a good time to flick through a few dates; of which until a few moths ago, I was totally and embarrassingly ignorant. (I don’t claim to know much now).

But the document explicitly does not set itself up to be an historical or political analysis, suggesting that these are ‘the impression and experiences of these 17 women during the three days we spent in Belfast or Derry’. The power of this document is perhaps most apparent in the personal nature of the accounts which detail the visit from a variety of different perspectives such as ‘Meeting the Peace People’, ‘A Peace Activists View’, visits to both Long Kesh and Maghaberry Prison and essays on ‘Housing Conditions’ and ‘Plastic Bullets’. The ‘Meeting the Peace People’ essay is particularly interesting.

The range of experience of those visiting is striking albeit the ‘delegation was organised by Sinn Fein and billeted in nationalist areas of Belfast and Derry - the Brighton group stayed in Ardoyne and New Lodge, and in the Bogside in Derry. We also supported a picket, held to protest at the strip-searching of Republican women prisoners in Maghaberry jail’.

And one contributor laments: 'the lack of any hard political analysis or discussion over the whole weekend [which] was a weakness of the visit and the main cause of my despair and frustration on returning home. Ways out of the impasse of spiralling violence with the lengthening list of IRA 'martyrs' were never tackled. 'Troops Out' - O.K. But after that? There was no opportunity to discuss solutions. True, a meeting with Sinn Féin councillors had to be cancelled and this might have filled the gap.'

Even given the inevitably more narrowly constrained perspective that that entailed there is a real sense of aspects of life in parts of the North during the latter part of the 1980s.

See Brighton Women and Ireland Group in the archive