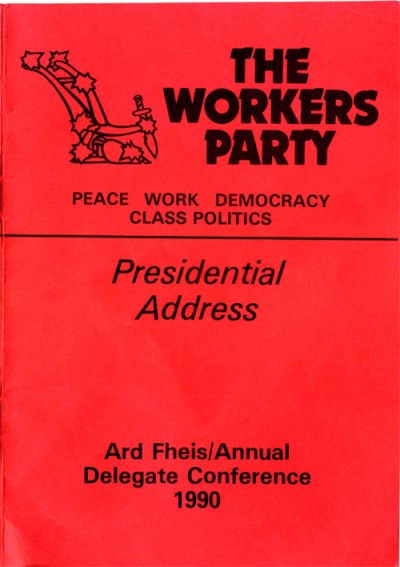 This is a particularly useful document that gives some indication of the mood of the Workers’ Party in the year following the effective end of the Warsaw Pact and the withdrawal of Soviet forces from Eastern Europe.

The previous year de Rossa had given a Presidential Address [see here ] which represented a shift towards a more market friendly Workers Party. This speech was to see something of a retrenchment.

The good news is that socialism lives; it lives in the hearts of millions of people. The bad news is for those who are rushing to bury socialism. There is no corpse for their coffin. … I, no more than anyone else, predicted this time last year that the year ahead of us then would turn out to be so remarkable. The Berlin wall fell and suddenly the iron curtain of tanks and missiles is redundant. In my speech at last years’ Ard Fheis I urged you to look searchingly at some sacred cows. I know I shocked you with some of the things I said about socialism. I asked you to debate these questions and you took me at my word. The debate so far has been a brilliant display of people grappling intelligently with immense and complex issues and arriving at conclusions which give new meaning and depth to socialism, creating a new political agenda to take us into the 21st century. That speech has itself been subject to a degree of sensationalist reinterpretation in the afterglow of developments in the East. There are those who argue that unless the Workers’ Party ditches key elements of our socialist views we will be condemned to a marginal role in Irish politics. We are told that it was only my speech that brought about the conditions of our electoral victories last year. To believe that would be self-delusion. It is a denial of your work and dedication and reduces people generally to the role of passive uncritical consumers of the latest sensation, incapable of making intelligent choices.

What is also notable is the strongly anti-Stalinist line taken.

What has died is pseudo-socialism, pseudo because it lacked the essential component of democracy; Stalinism is dead. Systems imposed on unwilling people who have never been consulted are dead too and anyone who feels that type of pseudo-socialism can be revived by its pretending to be something else for a while and re-emerging from the ashes like a phoenix, is dead from the neck up.

The response was hardly surprising. Those close to Eoghan Harris [who had himself already left the Party] walked out.

Other features of the speech are worth noting. There is some concentration on environmental issues, perhaps with an eye on the 1989 victory of Green Party MEPs UK. The treatment of Northern Ireland is interesting with de Rossa saying the following:

What I am arguing for is the need to look at the policies and political culture of the Republic from which Articles 2 and 3 are derived. What do they imply about the way we think? What we are saying in Articles 2 and 3 is that there is unfinished business. That what started in 1916 has not been completed and that we want to extend the sovereignty of this State - to cover Northern Ireland. We must seriously ask ourselves as a people what is the basis for such an approach to the politics of this island.

What is interesting here is how he doesn’t couch this in terms of a Republic which would supersede the political entities on the island, but rather appears to find the very concept of a united Ireland as problematic.

The [New Ireland] Forum did not address the fundamental question of why we are demanding in our constitution a united Ireland which in turn gives sustenance to people like the Provos to murder, maim and destroy.

This is followed by a strong support for extradition.

On the economy the party continued to favour an interventionist stance, with de Rossa suggesting that: [the WP] would launch a new industrial policy… Based on the existence of a mixed economy, with a massive reallocation of the nations resources, financial, organisational and institutional. This is allied with a strong defense of the commercial state sector and public ownership. 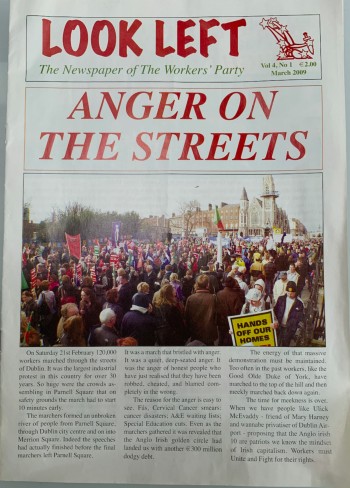 The Necessity of Social Democracy (1990)