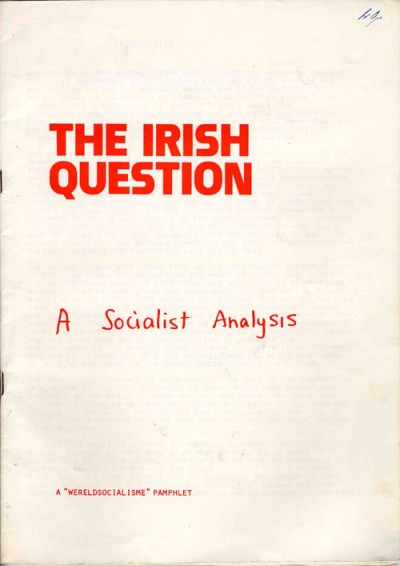 An avowedly Marxist party, it eschews Leninism, nationalism and war. Its basic objective is:

The establishment of a system of society based upon the common ownership and democratic control of the means and instruments for producing and distributing wealth by and in the interest of the whole community.

This is to be achieved through democratic elections and presently prevailing institutions, an outcome which the SPGB admits is beyond its capabilities at this point but which it seeks to hasten through political activity and consciousness raising. This piece cannot do justice to the history of the SPGB, but both the wiki page and the late and great John Sullivan  deal with it in some detail.

The document is in part a reprint from the SPGB Socialist Standard = though it also seems to address an international and/or European audience. It’s overall thesis is one which is positioned within discourse which is heavily critical of Republicanism and Irish independence. This is perhaps best exemplified in the text by the chapter entitled ‘The Irish Capitalist Republic’ on p.19 and in particular the discussion of James Connolly:

Just before he was tied to a chair and shot by a firing squad in May 1916 the injured James Connolly is said to have remarked ‘the socialists will never understand why I am here’. Well might he have felt guilty, from a socialists and working class point of view, about what he had done. For he was being executed for his leading part in the Easter Rising, an armed insurrection aimed at establishing, with aid from Imperial Germany, an independent, and unavoidably capitalist, Republic of Ireland.

Before the war Connolly, who was well acquainted with Marxist and socialist ideas, had been a prominent and successful trade union organiser. At the time of his execution he was the secretary of the Irish Transport and General Workers Union and ‘commandant’ of its armed defensive force, the Irish Citizens Army. This had been formed in the course of the great Dublin Lock-Out of 1913 to protect union members from police violence and intimidation, but Connollly turned it into a Republican body. He himself was almost certainly admitted to the secret Irish Republican Brotherhood before being appointed commander of its forces in Dublin during the rising.

And from this concludes:

The IRB had no social programme and was simply dedicated to using physical force to establish an Irish Republic. The Declaration of the Republic which was proclaimed from the steps of the General Post Office in Dublin does, it is true, express a few democratic and reformist sentiments, but only in the vaguest terms. Its main concern was obviously ‘The Republic’.

It is scathing about the southern state but also about the processes that led to even partial independence.

In 1965 an Anglo-Irish Free Trade Agreement, providing for full free trade between the two countries after ten years, was signed, and since 1973 Ireland, along with Britain, has been a member of the Common Market (EEC). When this process of full economic re-integration with Britain is completed Ireland will be back where it was before 1922 - and the thousands of young men who sacrificed their (and other people’s) lives ‘for Ireland’ will be clearly seen to have died and killed merely to have got about thirty years protection for Irish capitalist industry to catch up with the rest of Britain plus a few superficial political changes, which when they weren’t for the worse, amounted to little more than ‘painting the pillar boxes green’ as the popular saying accurately puts it.

And its position on the conflict in Northern Ireland is therefore unsurprising:

During the 1930’s the IRA rapidly degenerated from a popular movement into the small gang of terrorists it is today.

The document critiques all left wing formations, the Leninist concept of ‘Imperialism’ and both the Trade Unions and the Civil Rights movement who it argues ‘must take responsibility for the current violence in NI. For their reformist campaign helped unleash the passions that have put the clock back fifty years. The very nature of their campaign - a fairer deal for Catholics under capitalism - meant that they were seen to be and in fact largely were a Catholic sectarian movement’.

Socialism alone can end this, by making the means of production the common property of all mankind so that they can be used to provide abundance for all. The struggle for Socialism will united rather than divide the working class because it does not set worker against worker over the few crumbs capitalism has to offer but is so clearly in the interests of them all.

An interesting addition to the Archive from the British left. 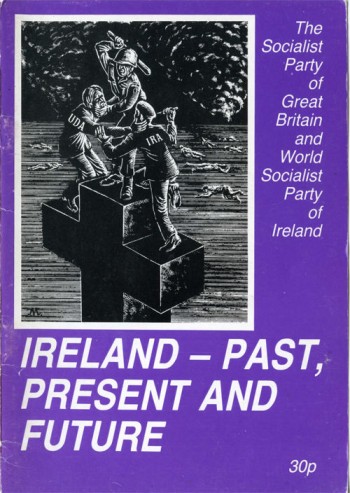 Socialist Party of Great Britain in the archive

The Socialist Party of Great Britain (SPGB) is the second-oldest extant political party in the UK and is regarded as within the impossibilist tradition. It is best known for its advocacy of using the ballot box for revolutionary purposes; opposition to reformism; and its early adoption of the theory…

See Socialist Party of Great Britain in the archive