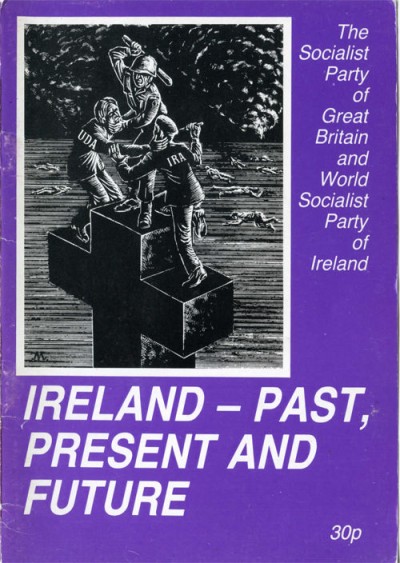 Many thanks to the SPGB for forwarding this very interesting document to the Archive.

This document, issued by the SPGB was published in 1983. It joins other documents from the SPGB, the Socialist Party of Ireland (1940s onwards) and the World Socialist Party of Ireland already in the Archive. The contents is broad-ranging offering an overview of ‘The Origins of Sectarianism’, ‘The Roots of Nationalism’, ‘Partition and the Consequences’, ‘Civil Rights and Political Violence’ and ‘Socialism’.

In the introduction, signed by the Socialist Party of Great Britain, it notes that:

It is commonplace to read news reports of killings on the streets of Ulster. The media present the bombs and the barricades, the internment camps and the rubber bullets as unfortunate hiccups which can be overcome by sensible politicians applying their thoughtful solutions.

But there can be no solution to ‘The Irish Problem’ as long as it is regarded as such. There is nothing particularly Irish about it. The poverty which forms the material basis of discrimination and fratricidal strife is inevitable in the framework of the present social system – capitalism.

But while the basic problems are the same throughout the world (even in the so-called ‘communist’ countries where capitalism functions through the medium of the State), the contradictions of the system manifest themselves differently and in varying degrees of viciousness according to historical, political and economic conditions obtaining in different areas.

It is to capitalism then, as it developed in the historical circumstances peculiar to Ireland, that we must look for an explanation of the problems of today.

In a later paragraph it argues that:

The demands of civil rights movement amounted to no more than an insistence that the miseries of capitalism – its inadequacies in housing, job and education – be distributed among the working class without regard to their religion – as if other factors bearing on selection and rejection for these things were not also discriminatory.

The politics of Unionism and Republicanism have become meaningless in terms of the interests of the now largely unified capitalist class; and certainly, neither Unionism nor Republicanism – despite the latter’s flirting with the vocabulary of Socialism – have anything to offer the working class. It is because Unionism, the Border and Ulster are no more than a source of irritation to capitalism – the issues involved having no logic in class terms – that more effective moves for a solution of the Northern Ireland problem have not emerged. 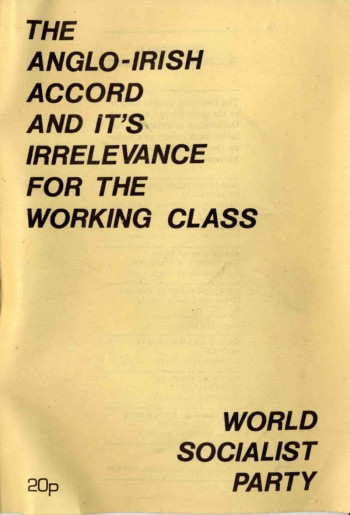 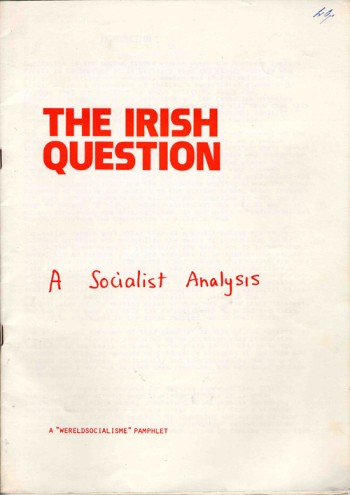 The Irish Question: A Socialist Analysis (1976)

Socialist Party of Great Britain in the archive

The Socialist Party of Great Britain (SPGB) is the second-oldest extant political party in the UK and is regarded as within the impossibilist tradition. It is best known for its advocacy of using the ballot box for revolutionary purposes; opposition to reformism; and its early adoption of the theory…

See Socialist Party of Great Britain in the archive