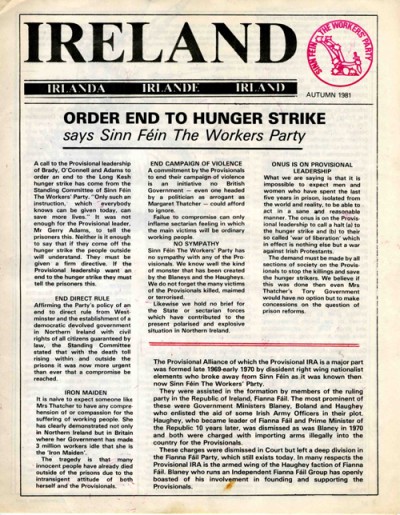 This is a notable document, published as it was at the height of the Hunger Strikes in the North and it clearly exemplifies the attitude of SFWP towards them and towards Provisional Sinn Féin. It’s important to note that this was intended for circulation outside Ireland, particularly amongst left and progressive forces which explains the explanatory note on the front detailing an SFWP perspective on the nature and genesis of the ‘Provisional Alliance’ and a certain stolid explicatory tone to its contents.

The leading article is headed ‘Order End to Hunger Strike says Sinn Féin The Workers’ Party’. It details a call from the ‘standing Committee of SFWP.

Perhaps reflecting the difficulties of articulating this message in the broader context the article also ‘affirm[s] the policy of an end to direct rule from Westminister and the establishment of a democratic devolved government in Northern Ireland with civil rights of all citizens guaranteed by law…’ and continues with an attack on Margaret Thatcher headlined ‘Iron Maiden’ although there is an effort to generate a linkage between her and PIRA… ‘The tragedy is that many innocent people have already died outside of the prisons due to the intransigent attitude of both herself and the Provisionals’.

It bluntly states that ‘SFWP has no sympathy with any of the Provisionals. We know well the kind of monster that has been created by the Blaney’s and the Haugheys. We do not forget the many victims of the Provisionals killed, maimed or terrorised. Likewise we hold no brief for the State or sectarian forces which have contributed to the present polarised and explosive situation in Northern Ireland.’

There’s considerably more, from H-Block - The Socialist Perspective to a piece on ‘Ireland’s political parties - who condemns the Provos?’ which lists each Irish political party and their stance on that issue (there’s an interesting admission in the entry for SFWP itself: ‘in some rural areas there would possibly be an emotional response in support of the Hunger Strikers’. This follows a certain thread of counterposing the rural and the urban throughout.

On Page 3 there is a photograph entitled ‘Members of the Provisionals give the fascist salute at the funeral of hunger striker Raymond McGreesh, May 21, 1981’, which is clearly meant to dovetail with an article explaining ‘Why the Provisionals Are Fascists’. It’s hard to credit that any such salute was given, it certainly wouldn’t be characteristic of the iconography of Republican funerals.

There’s also a grim photograph on page 7 accompanying that article. The article argues that PIRA should ‘be seen in the same context as the Red Brigades in Italy, the Baader Meinhof gang in Federal Germany, ETA in Spain, the neo-Nazi’s of France and Italy… It is known that some links have been established between the Provisionals and British Fascist Organisations. A Conference of European Fascists held in Belgium some time ago was attended by representatives of the Provisionals’. This is an interesting assertion given that there has been and remains a profound antagonism on the part of British fascist and neo-Nazi groupings towards the very concept of Irish Republicanism.

More interesting again is that the article name checks specific journalists as ‘[giving] more coverage than necessary to the H-Block campaign’. It also considers ‘Backward elements’, these being those ‘dominating’ the Gaelic League and the Gaelic Athletic Association, ‘Maoists’ and makes some unusual political linkages. For example murders of Gardai are attributed to ‘Provisional/ultra-left Maoist gangster elements’. Then there is the assertion that due to the presence of Fr. Denis Faul as RCC prison chaplain, ‘it is hardly surprising then that most of the prisoners see themselves as being engaged in a religious or Holy War’.

The language and interpretation that infuses the document may well be in part explicable both by the political goal of demonstrating difference between two organisations both sharing the name Sinn Féín, casting the Provisional IRA and Sinn Féin in a profoundly negative light internationally and by the text inset on page 2 which references the October 1975 conflict between PIRA and the Official IRA and members of OSF and PSF. The legacy of that and other conflicts is evident in the bitterness of the analysis - the young daughter of an OIRA member was murdered in the feud and that and other actions where people on both sides died were such as to generate very real political and psychological effects that would reinforce and exacerbate already existing approaches.

But added to that is perhaps a recognition that the political terrain in Northern Ireland was altering fundamentally, from their perspective, for the worse in the wake of the Hunger Strikes and with the rise of much more politically oriented and, in truth, left-leaning Sinn Féin. 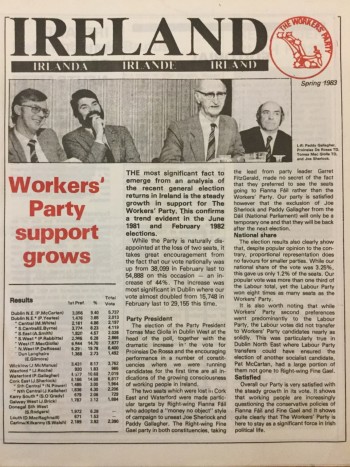 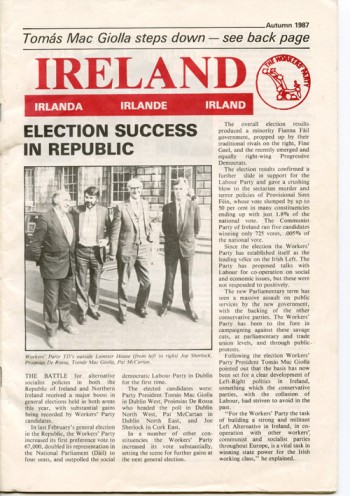 Ireland in the archive

Ireland was the International magazine of The Workers’ Party, published quarterly.…

See Ireland in the archive