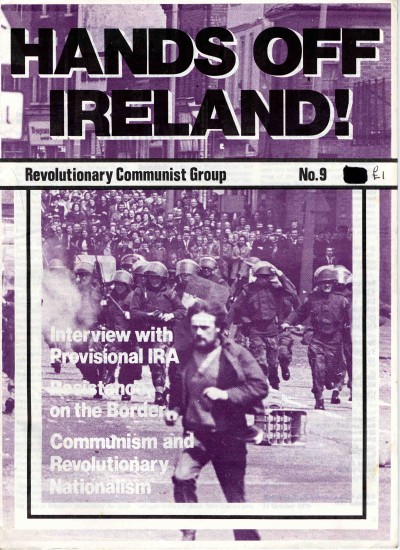 Here is a quarterly bulletin of the Revolutionary Communist Group, which emerged from the International Socialists as part of an internal, albeit undeclared platform. Leading figures associated with the RCG include David Yaffe. As noted on wikipedia  their line of eschewing support for the Labour Party was a substantive break with many other further left formations. The RCG itself suffered further splits, including perhaps most famously those who departed to form what ultimately would be the Revolutionary Communist Party  (a document from whose precursor, the Revolutionary Communist Tendency, is available here in the Archive).

As with this document the RCG was strongly supportive of the Irish republicanism and so there are articles on a H-Block Press Visit, ‘Resistance on the Border’, and interview with the Provisional IRA and a piece by Terry Marlowe which reflects on Communism and Revolutionary Nationalism. Perhaps the editorial best gives a flavor of the contents and opinions within.

It lauds what it sees as ‘confirmation of the growing strength of the Irish people - the events of August 27 when Mountbatten and 18 soldiers were killed by the Provisional IRA. In this context it is more vital than ever for the British ruling class to isolate the Republican movement from the working class in this country.’

It speaks of attacks on Hands Off Ireland supporters, and argues that ‘Our reply to these attacks can be seen in the appearance in this issue of a full length interview with a spokesman of the military wing of the Republican movement - the Provisional IRA’. That interview is interesting, not least due to some insights into attitudes within PIRA to the INLA and to some fulsome quotation of Marx and Lenin, perhaps deliberately tailored to the audience. There’s an echo of the argument put forward in the document posted last week from Peoples’ Democracy about elitism in armed struggle, though in this instance it’s quite the reverse.

All told a useful reflection on the attitudes of some on the further left in the UK during this period.

The Revolutionary Communist Group (RCG) is a Marxist-Leninist political organisation based in the United Kingdom which is avowedly socialist and communist in nature. Developing in the early 1970s, the RCG grew out of the “Revolutionary Opposition” faction of the International Socialists (IS), (forer…

See Hands Off Ireland! in the archive