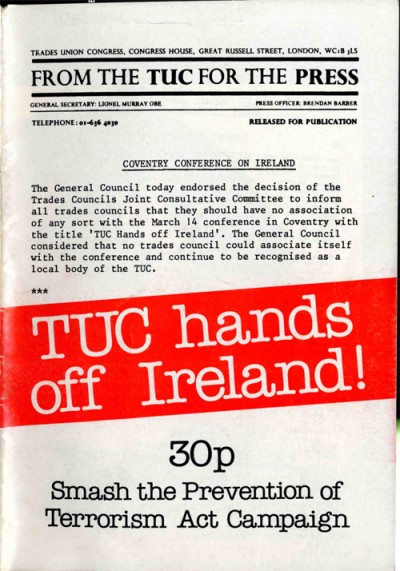 This document from the Revolutionary Communist Tendency (UK) is perhaps worthy of particular consideration as an example of Irish related material from the UK, and not merely for its content but also for the fact that the RCT eventually underwent a transformation into the Revolutionary Communist Party which later birthed the contrarians of Spiked. Although the RCP was infamous for its policy positions, and Living Marxism later still for its, one often unnoticed aspect of their platform - at least subsequently - was a very strong identification with Irish independence. This document here can be viewed within that context and while its overall purpose is one that is linked to UK internal politics, and particularly that of the left and the TUC, it is in its analysis of Ireland that it is of most relevance to the Archive.

Very briefly this takes a line that 'the official labour movement has failed to support eh demands for political status of republican prisoners of war in the Six Counties of Northern Ireland... Yet the British TUC interferes in the affairs of the Irish people through the Better Life for All Campaign and the call for a Bill of Rights. TUC Irish policy is simply a cover for its complicity in British repression throughout the Irish War'

Worse again, from the RCT perspective, the TUC refused to endorse the Smash the Prevention of Terrorism Act Campaign "TUC Hands off Ireland!" conference, and had actively barring trades councils from participating in it.

Inside the document takes a strongly pro-Republican movement viewpoint couched in the language of class struggle (and note a message from IRSP prisoners to the Conference)...

Anybody who has read and thought about the conflict in ireland, or visited Belfast or Derry, knows that the two main adversaries in this war are the republican movement and the British State, and yet the media always present 'the troubles' as a sectarian feud between Catholics and Protestants. The first peculiarity of the Irish War, therefore is that its real character as a national liberation struggle is always obscured and denied in Britain.

And the pamphlet argues that 'what is so special about the Irish War that its existence has to be denied... The answer is simple. The War in Ireland is an immediate and mortal threat to the British ruling class'.

Intriguingly, bar a reference to the RUC and the UDR - referenced as the 'local paramilitary forces' - there is no mention of political Unionism.

Also included with the leaflet was a reproduction of Legal Rights for Those Detained issued by Fr. Denis Faul which you can find in jpg form at the foot of this post.

Those of us who have followed the RCP and its metamorphosis into that exotic entity known as Spiked , will recognise that a faint echo of this line has survived their refashioning as contrarians and libertarians, indeed look no further than here for evidence of same ... The Left Archive is interested in material that relates to Ireland from any left source and whether that material is printed in Ireland or outside of Ireland. 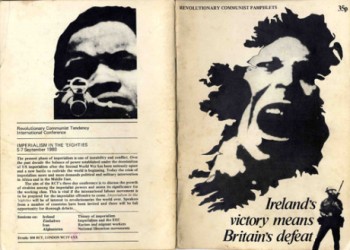 Revolutionary Communist Tendency in the archive