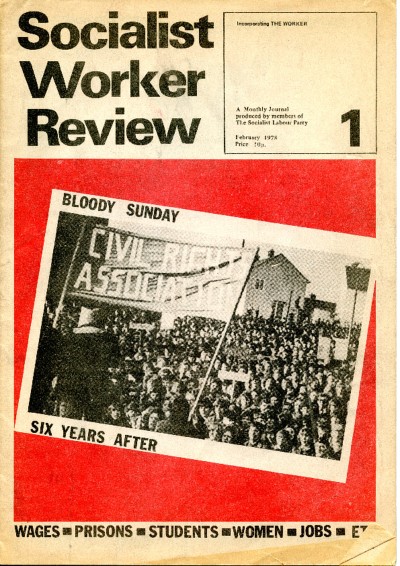 Under the heading Socialist Worker Review there is the following outline of goals:

Socialist Worker Review is produced by a group of members of the SLP. The magazine is published monthly and will argue for the following points. Opposition to National Wage Agreements or wage restraint in any form and argue for the building of a rank and file movement in the unions to fight for union democracy and militant policies. Support for the struggles of the unemployed and oppose redundancies and productivity deals. Opposition to state repression and argue for trade union action to oppose repression. Support for the women’s struggle in all areas, economic and social. A socialist answer to the national question based on the unity of the working class.

Interestingly it also notes that ‘The supporters of this magazine will constitute the Socialist Workers Tendency’.

And in the editorial, entitled ‘A Rising Tide?’ it notes that:

Up to now the Irish left has failed to provide such a [socialist] party which had real roots in the working class movement. The formation of the SLP, though, has changed the picture somewhat. Though essentially a development from the 26 county Irish labour Party it has acted as a pole of attraction for all sorts of different strands on the left. It has, in fact, taken on a much more left-wing and radical character, than many of its original founders conceived.

Yet the SLP is not as yet a revolutionary party. it needs to match the many fine aspirations that are contained in its constitution with deeds. It needs to sort out many of the theoretical issues on how socialism is to be achieved in Ireland. Many comrades in the party still place considerable emphasis on the role of parliament. Others do not see the validity or legitimacy of working in the trade unions to oppose the sell-outs of the bureaucracy.

The SLP is a party which is developing. It can still go in two different directions. It can return to the electoral traditions of the LLP or it can seek to build itself as a revolutionary party which fights for direct working class action in the here and now.

And it concludes. This magazine will aim to put forward the ideas and the experience of Marxism in a readable and understandable format. It will aim to apply those ideas to the everyday problems we face.

The remainder of the contents is wide ranging with a long piece on Bloody Sunday: Six years after, another on the S.L.P. and the Left – which attempts to ‘define the SLP in relation to the other left groups’ and seeks ‘a definite break with the old LP type reformism’. There’s another piece critiquing and criticising National Wage Agreements, and another one on conditions in prisons. There’s also a piece by John Goodwillie which considers the development of the Socialist Workers Movement. Finally there is a review section.

In the piece on the SLP and the Left, John Goodwillie writes:

The field of action on which the SLP arrives is, however, already partly occupied by others, notably Sinn Féin the Workers’ Party and the Communist Party of Ireland, but also the Socialist Party of Ireland and smaller groups. one of the principal problems in front of the SLP will be to distinguish itself from the Stickies and the Communist Party. To say that it is necessary to be different does not preclude the joint platform, such as the Liaison Committee of the Left were previously involved in the ‘Left Alternative’. Clearly there is some common ground… But socialism does not just consider of spreading state enterprise and state planing to other areas of the economy. it also means workers’ control of those firms, of the mechanisms of state planning, of the state itself.

It is here the SLP must present an alternative to the authoritarian nature of those parties, to their defence of the authoritarian systems of Eastern Europe, to their confusion between the state and the workers… Sinn Féin and the Communist Party think in terms of capturing the top of the state. The S.L.P. must think in terms of convincing the bottom, the working class. on that base the rest will follow.

It has been said that the SWT publication was more professional than that of the SLP as a whole. Certainly it is a very professional production, magazine-like, well designed and well printed. In the absence of any SLP specific material this is an important addition to the Archive. 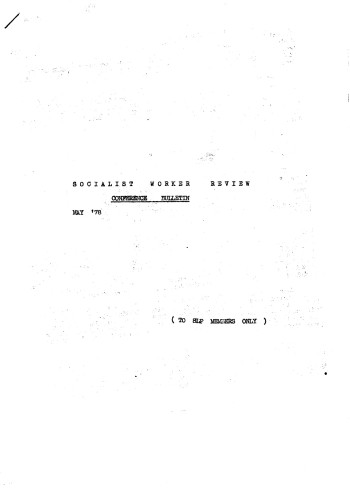 Socialist Workers' Tendency in the archive