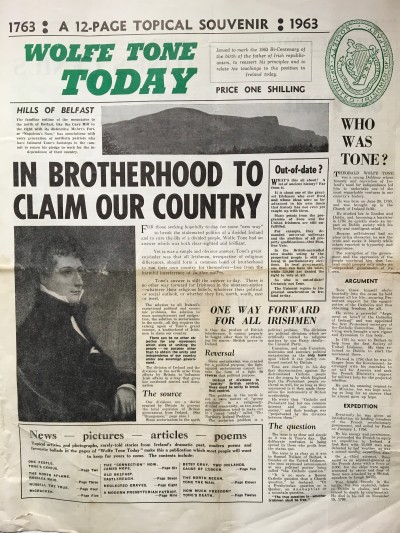 Appropriate given this weekend is the anniversary of Wolfe Tone’s birth to post this document which was issued by the Northern Directory of the Wolfe Tone Bi-Centenary and edited by Jack Bennett. The text notes that it was:

Issued to mark the 1963 Bi-Centenary of the birth of the father of Irish republic­anism, to reassert his principles and to relate his teachings to the position in Ireland today.

It has a wide range of articles concerning Tone. The editorial notes under the heading One People:

You will not find one word of dead history in the pages of this publication. Rather will you find presented here the living story of an uncompleted and undying cause-the cause of uniting all Irishmen, irrespective of creed, in a common bond of brother­hood to assert-and to achieve- the unity and independence of their country.

The paper examines the uprising in 1798 and contains songs and verse relating to those events. And it makes explicit linkages between 1798 and the 1960s. Under the heading ‘The Connection Now – How it harms us’ there is this:

If ever a prophecy concerning a country’s future came un­happily to be fulfilled, it was the prophecy uttered by Wolfe Tone at his court-martial in Dublin in November, 1798. No spirit of rancour or pre­judice caused Tone to declare that the connection with Britain was “the curse of the Irish nation” and that so long as It lasted “this country could never be free or happy.”

Tone was merely stating a matter of fact, As be put it elsewhere, the connection was “the bane of our happiness and prosperity.”

One hundred and sixty-five years have passed since bis prophecy was made. And if ever proof was required of the wisdom of Tone’s foresight, the history of those years and the position of Ireland today pro­vides it in plenty.

Another piece points to the links between the Rising and 1963 – under the heading ‘The Cause of labour. And an article asserts:

For the vast majority of the Irish people, north and south, foreign control has had disastrous economic effects – poverty, unemployment and emigration.