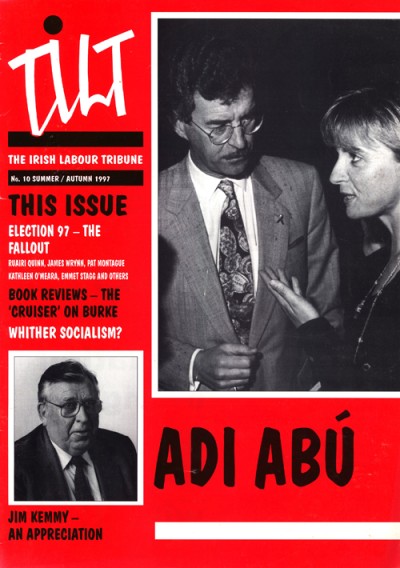 Many thanks to Damian O’Broin  for this guest post.

TILT, an acronym apreciation for the The Irish Labour Tribune, had a relatively brief existence over a few years in the late 1990s, either side of the 1997 election.

This issue was produced in the immediate aftermath of the 1997 election and is dominated by post-mortems of the 92-97 governments and the subsequent election defeat.

At a time when it seems likely that Labour will end 12+ years in opposition by entering a coalition after the next general election, it is instructive to look back at how the party viewed their last such experience.

But first a bit of background on TILT. It was very much driven by the party young guns at the time. The editors were Aidan Culhane, now a councillor and a defeated candidate at the last general election, and Ronan O’Brien, soon to be appointed Ruarí Quinn’s chef de cabinet.

But that’s not to say that the heavyweights of the party weren’t involved. This issue contains pieces by Quinn, Stagg and Kathleen O’Meara, as well as a lenghty piece by James Wrynn.

Some of the snippets are interesting. There’s a short piece on Sinn Féin:

“One of the least talked about performances in the General Election was that of Sinn Féin. The election of Caoimhín Ó Caoláin could have been accompanied by the election of Martin Ferris in Kerry North and Sean Crowe in Dublin South West. Ferris’s performance – he garnered 5,691 votes – in Kerry North was particularly impressive. Had Dick Spring not been the Labour candidate, it is not inconceivable that Ferris could have been elected. And all this before the second cease-fire was called. Sinn Féin now pose a considerable threat to the Left and Labour, not unlike that of the Workers’ Party in the 80s. And, they are ruthlessly organised, usually on a full time basis subvented by the state as Ó Caoláin’s own career testifies.”

Note the attitude that Sinn Féin (and the Workers’ Party) pose a threat not just to Labour, but to the ‘Left’. Elsewhere, the editorial talks about ‘our cohesiveness almost cosiness with Fine Gael and our other Government partner’ (my emphasis). An indicator, perhaps, of future tensions within the new, merged party, and continuing reluctance today among many in the party to engage with Sinn Féin.

Of course, what this also shows is just how different the political world was is 1997. And that’s a sense you get throughout the magazine. This was the time just after Bertie’s first election, before the drip, drip of tribunals had kicked in, with Ray Burke still in the cabinet. Several columnists anticipate an early election - a reminder that the decade of Fianna Fáil hegemony that was just starting had shaky foundations and required considerable skill and strategy to build and maintain.

It’s also worth rememebering that in 1997 Eamonn Gilmore wasn’t even a member of the Labour Party - the merger with Democratic Left was still a year away – and the Good Friday Agreement had yet to be signed.

So what do they say about their time in government and their failure in the 1997 election?

Emmet Stagg blames the media for a relentless campaign against Labour over the preceding 5 years, the decision to campaign as a government, rather than as the Labour Party, and the difficulty the former campaigning politicians who were swept into Leinster House in 1992 had adjusting to backbench or ministerial life.

Quinn points to being out-maneouvred on taxation by Fianna Fail, with the public being swayed by their focus on nominal tax rates rather than the tax band and allowance approach of Labour.

Interestingly, Quinn, talks aboiut the Celtic Tiger economy already delivering increased prosperity and 200,000 extra jobs. A useful reminder that the good years had already started before Fianna Fáil returned, despite what they’d have you believe.

Quinn’s most interesting point is that Fianna Fáil’s message really hit home with those already in work – so while 200,000 more people had found jobs, those who already were in work were frustrated that their incomes weren’t rising fast enough – hence the success of the ‘It’s payback time’ message.

Like Stagg, Quinn expects that the minority government won’t last and forsees an early election. How wrong they were!

Pat Montague contributes a realistic assessment of the state of the party, and calls for Labour to become a campaigning party – good advice, sadly not heeded.

But the most interesting and insightful piece is the one by James Wrynn.

Wrynn is adamant that entering coalition with Fianna Fáil was not the problem, and was not the reason for defeat in 1997. Amid references to Fine Gael’s ‘superior demeanour’ in 1992, their insistence on including the Pds and refusal to countenance coalition with Democratic Left, Wrynn argues that the 1992 Programme for Government was a remarkable document in the extent of its inclusion of Labour Party policy. Faced with a choice between an arrogant Fine Gael and a supine Fianna Fáil who rolled over and agreed to everything, it was an obvious decision to make.

He doesn’t deny that there were problems with the FF coalition, and biggest amongst these was the tax amnesty which he recognises as Labour’s biggest mistake from this period. His account of it is interesting:

“It is important to understand the context of the tax amnesty, although this is only a slightly ameliorating argument. The budgetary position was extremely tight unlike the situation in recent years. The prospect of a windfall income for the exchequer couple with a greater flow of taxes in subsequent years from newly captured miscreant taxpayers who would not escape their tax liabilities any longer seemed a worthwhile trade-off against some tax evasion by the about to be captured culprits. We were wrong and I was wrong in supporting it. The electorate were not interested ina scheme to give high income tax evaders a greatly reduced tax bill, even if we were guaranteeing they would pay their way from then on. But they were most grieviously upset that the Labour Party were supporting this measure. This was a breach of trust. The ‘passports for sale’ controversy was less damaging but added to the loss of trust.”

But even with this, Wrynn argues that Labour still carried the expectations of the public to a higher standard.

“The silence which descended in pubs, places of work and anywhere with a screen as Dick Spring stood up in the Dáil to articulate where the Labour Party stood in relation to the Brendan Smyth / Harry Whelehan affair was a measure of what the public expected of us and of the regard in which they hold us when we are true to our values.”

I distinctly remember that silence myself, watching the speech on a TV in the office with me colleagues gathered round. It was an electric moment. And, Wrynn argues, at this point “our stock was at a new high, 22% just two and half years before June ‘97”. More evidence that it was not entering coalition with Fianna Fáil which the electorate disliked, but something that happened later.

And Wrynn believes that something was the ‘lacklustre’ programme with FG and DL, the budgetary conservatism of the 1994-97 years, and two and half years of gradual decline.

On top of this was an extraordinary failure in organisation. Wrynn calls it ‘neglect on a grand scale’:

“a party with 19% of the vote in 1992 continued to behave organisationally as if it were a 6-8% party. Constituencies with newly elected Tds or Senators were left to flounder to their own devices in building a constituency organisation and electoral machine. It is ironic that a party which believes in active intervention in the market place where the market place fails to provide appropriate necessary services to a society, should leave the building of its organisational capacity to the laws of chance and luck.”

Like the other writers, he also takes aim at the media, and Independent Newspapers in particular, for an anti-Labour bias. He also points out, as does Montague in his piece, that Labour had come out of government in a far stronger postion than ever before – which was true. However, his critical faculties desert him when describes the election as:

“a complete failure for FF.They stalled at 39%, after almost 3 years in opposition and the majority of their gains were achieved by sucking reluctant PD No. 2s into their net – an unlikely repeat prospect. The new government is lacklustre in the extreme and semi-paralysed by the fall-out of Haughey and what may follow.”

So what lessons for today?

Let’s leave aside the questions of whether Labour should enter coalition and whether they should consider FF as potential partners and instead look at how they should approach things if they do.

Well, Fine Gael’s ‘superior demeanour’ has definitely returned and there seems to be an expectation that Labour will inevitably support them in coalition. Labour’s first task therefore is to ensure that they don’t allow themselves to be bounced into a bad deal, in the way the Greens were in 2007. The situation cannot be allowed to develop that coalition with Fine Geal is the only option. Strategies should be prepared to handle an alternative coalition with Fianna Fáil or indeed a refusal to enter coalition with either. Ultimately is should be about the programme. If it’s not Labour-hued then it shouldn’t be agreed to.

And clearly the second task is organisational. Others are probably better positioned to say how the current organisation compares with that in 1997, but it seems clear that if Labour are to enter government, as much talent and energy needs to be devoted to maintaining and buidling the organisation, as there is to running the country. 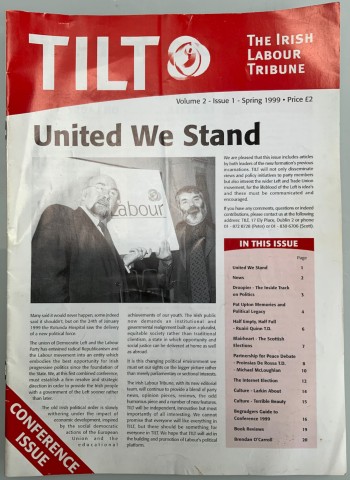 TILT in the archive 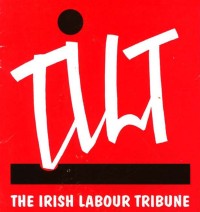 See TILT in the archive