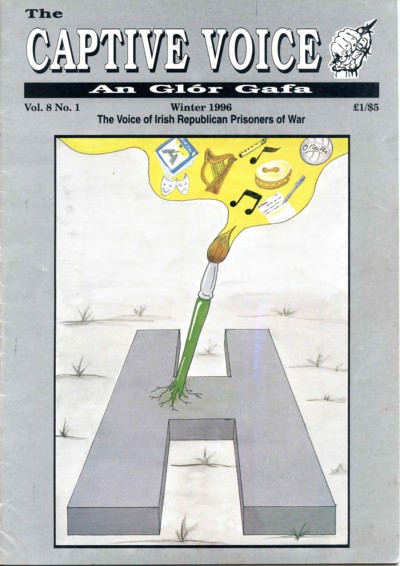 As noted here with the previous edition of The Captive Voice this publication is a unique addition to the Archive. As the preface of that edition notes:

The Captive Voice/An Glór Gafa is a quarterly magazine written in its entirety by Irish Republican POWs currently being held in Ireland, England, Europe and the US. It is publish by Sinn Féin’s POW Department. Irish republicans have always recognised that resistance to British misrule does not end upon their arrest. The battles to be fought and the tactics to be employed may change but the enemy remains the same.

As the editorial notes:

The establishment of this jail journal is a tribute not only to our families, friends and comrades… but also a clear recognition that we are what we are – poetical prisoners, unbroken in our deep rooted desire for freedom.

The Captive Voice affords us a platform and an opportunity to present in print our views on those toupees and issues which affect daily livfe both inside and outside of the jails. The magazine contains political analyses of current national and international affairs, culture, short stories, poetry and the latest updates on prison-related campaigns and issues. Satire and humour can also be found whiting the special features, cartoons and artwork illustrations.

Interestingly the next page carries a message from the POWs which notes:

Although Britain seeks to use prisoners as political hostages, we refuse to be victims of this strategy. This is clearly illustrated by our participation in cultural struggle, as outlined by several articles in this magazine. We remain political activist, committed to fundamental constitutional change and a negotiated settlement.

The range of the articles within is very wide with reports from women prisoners, pieces on the history of internment, the RUC and the South African peace process and including one covering the visit of author Helen Lewis to Long Kesh to speak about her book ‘Time to Speak’. Lewis was from a Jewish family in Czechoslovakia and after being sent to the Terezin ghetto by the Nazi’s later was imprisoned in Auschwitz.

More from The Captive Voice 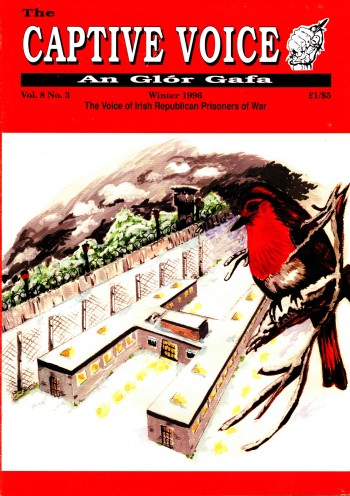 The Captive Voice in the archive

The Captive Voice / An Glór Gafa was a magazine written entirely by Republican prisoners. It ran for 26 issues between 1989 and 1999.…

See The Captive Voice in the archive