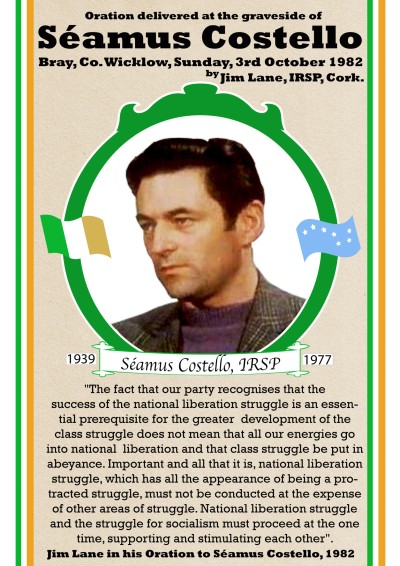 Many thanks to Jim Lane for forwarding this to the Archive, the oration given by him at the graveside of Séamus Costello of the Irish Republican Socialist Party on 3rd October 1982.

In five pages this document covers considerable political and ideological terrain, outlining the legacy of Costello for the IRSP, the political approach that he gave to the party and a reiteration of key principles including a tactical attitude to abstentionism and a critique of others including ‘left-republicans’. The issue of abstention links into an overview of the then current political situation in the North and a staunch defence of abstaining from the Assembly elections.

A key passage is the following:

Séamus Costello, it was often he said, “I owe my allegiance to the working class”; and of the party he helped found, he said:

Here we have a clear exposition of the primary objective of the Irish Republican Socialis Party – a revolutionary socialist state in Ireland.

And the oration continues by noting that:

To achieve this objective, part of the struggle entails resolving the national question. “Part of the struggle” – it is important for us all to reflect on this. It implies, that in the present period of struggle, when so much effort is being put into the struggle for national liberation, that our party be also involved in all other areas of struggle in the interest of the working class, the class to whom Séamus Costello pledged his allegiance exclusively. To a great extent, our party has been greatly inhibited in its efforts to wage struggle in working-class and other oppressed peoples’ interests.

And a further passage outlines the ideological underpinnings of the oration: 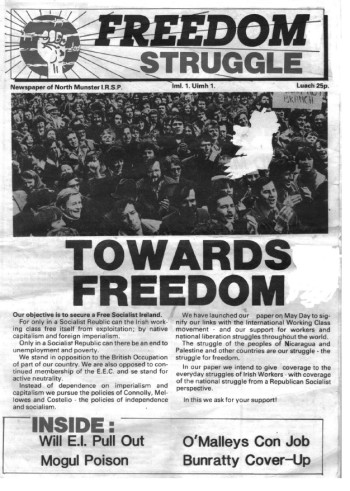 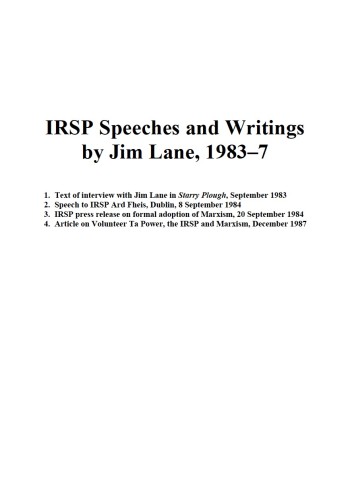