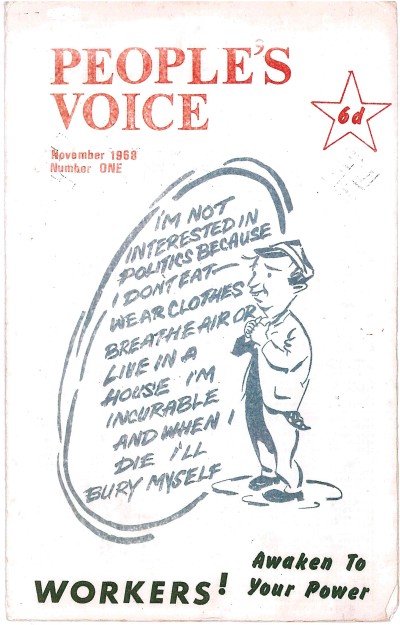 Many thanks to Jim Lane for forwarding this, the first edition of People’s Voice from Saor Éire (Cork) which was published in November 1968. This joins issue number Two which was misattributed originally to Saor Éire (Dublin). As Jim notes Saor Éire (Cork) was a public form of organisation launched by the Irish Revolutionary Forces whose documents are also very well represented in the Archive and can be found here. Publications like People’s Voice were intended to publicise the approaches of Saor Éire more widely

The document itself is twelve pages long and is remarkably comprehensive. A thoughtful cartoon decorates the front cover while the slogan People’s Power is prominent upon it. Inside there is a long analysis of the then recent attacks by the RUC and others on a Civil Rights protest march in Derry on October 5th. The piece is deeply critical of many involved arguing that ‘irrespective of the immediate reactions of those prominent in the organisation of the protest, their subsequent actions demonstrate that had they even dreamt of its outcome they would never have gone ahead with it in the first place’.

It would be naive for the people to go on thinking their disabilities under the Unionist regime would be mitigated should they receive the so-called ‘democratic rights’ the present fake leadership aspire to secure. They HAVE ‘democracy’ at present, as it is interpreted by the middle class; and any changes introduced or secured within the context of the present order of things will never alter the fundamental relationships which are the root cause of the trouble.

Joke of the month must surely be the advertisements of Fine Gael depicting the Nazi salute and jackboot, intimating their future use by Fianna Fáil should the straight vote become a reality. Talk about the kettle calling the pot-black ass – Christ, this is doing it with a vengeance. Oh, if only O’Duffy could see this, sure it would warm the cockles of his heart to know that the ‘Long Fella’ in the park could well be wearing a blue shirt in the near future.

Another pieces notes that:

In its recently published revised programme, the CPGB calls for ‘revolutionary’ change, but this apparently is to be brought about ‘by peaceful means and without armed struggle’. The old bogy of nuclear war, should the people resort to armed struggle, is also conjured up by these refugees from a Texan spittoon. British capitalism will never be without a friend for so long as the old CPGB is around and that’s for sure.

And it calls on the Workers’ Party (Irish Communist Party prior to merger with CPNI) to support armed struggle and distinguish itself from the CPGB, noting that ‘their spokesmen were quick enough in making know their opposition to the recent imperialist actions of the Soviet Union’.

Other articles include a reprint of a piece from the Irish People of January 30th 1864 entitled ’No More Humbug’. Another engages with the then recent PR referendum and notes that ‘we found it very difficult to get all worked up on the issue’. And concludes:

LET THE PEOPLE BE WAR OF THOSE WHO talk about their ‘democratic rights’ under the parliamentary system. There are no such rights.

Another piece seeks ‘Land for the People’ and there is a reprint of a poem ‘The Guerrilla Fighter’ from the PROGRESSIVE WORKER of Canada.

The centre pages are taken up by a spread that outlines the objects of Saor Éire, and notes that:

IN ESSENCE, OUR MINIMUM PROGRAMME is to mobilise the Working People under the banner of Socialism; to mobilise People’s Power for the purpose of unleashing it for the attainment of a People’s Republic, embracing all of the national territory and committed unreservedly to the People’s interests.

OVER THE PAST FEW YEARS THERE HAS been much talk on the need for a new movement. We have now given concrete reality to this talk, by crating an alternative which is resolute in purpose, clear in its aims and determined on victory. Saor Éire stands as a rallying point for all those who want to transform the nation. LET US NOW PROCEED WITH THAT TASK!

All told a very comprehensive document. 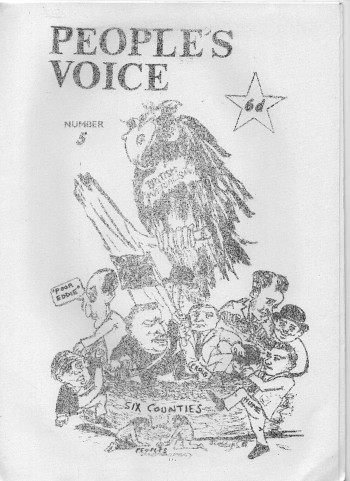 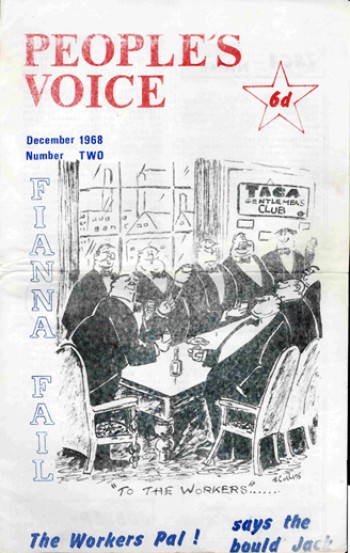 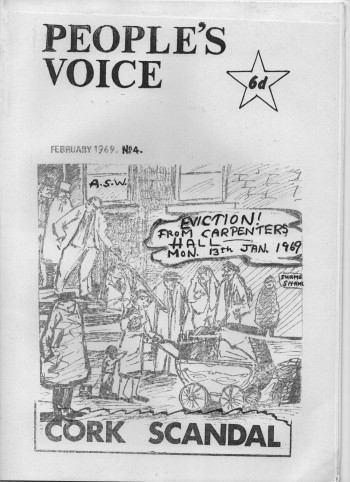 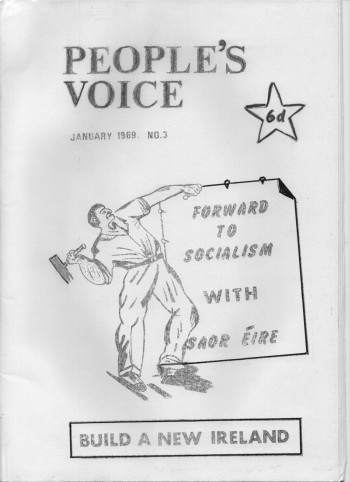